What’s with all the Demons in Christmas Stories

Like Santa, I’ve been getting my Christmas list together and checking it twice. This year, lots of friends and family are getting books. They are the perfect gift. So, as I’m out and about in cyberspace, checking out the upcoming releases so that I get Mom, Mom-in-Law, various aunts, and my friends all appropriate books, I’ve noticed a trend. Not just the prevalence of angels and demons replacing the tried and true weres and vamps, but demons in Christmas stories!

I’d expect to find them in Halloween novels. But Christmas? Then, I got to thinking that perhaps it’s a trend whose time has come. Angels have featured prevalently since the original Christmas story of Christ’s birth. It only makes sense that where there is good, there is evil… Demons were probably playing their part just as actively back then as they do now. Did Herod come up with the idea to kill the savior all by himself or did he have a little help from some little red devil perched on his shoulder?

Yet, when I started researching demons, using Wikipedia for a start, I discovered that the demons are defined as supernatural beings that aren’t human. The original Greek word, daimon, doesn’t even carry a negative connotation. Religious beliefs are what have made demons into their most common persona, fallen angels.

So, when I purchased a couple of books to preview (I have to make sure those gifts are entirely appropriate for their recipients, you know), I noticed a common theme in some of the romance novels is redeeming the bad boy. Well, you can’t get much badder than a demon. And what once was good (i.e., an angel) can be made good again, right?

Maybe… Although I enjoyed the books, I realized that for me, demons are the ultimate evil to pitch my hero and heroine against. Which is exactly what I did in my upcoming Christmas release, "A Christmas Curse", featured in ‘Twas a Dark and Delicious Christmas, releasing December 3rd, 2010, from Evernight Publishing. (http://www.evernightpublishing.com/pages/Coming-Soon.html)

Here’s an excerpt to whet your proverbial whistle: 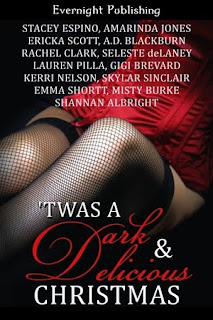 His lips pressed hard against hers while his tongue probed, possessed. He tasted of hunger, lust, need. Amanda felt the echo of her own want deep in her throbbing core.

Apologize? That seemed lame in relation to the circumstances. Frank had lost his wife. And God knew she was still reeling with confusion over her mother’s death. Sex wouldn’t magically banish her conflicting emotions, but would certainly ease the pain for a few hours.

Frank’s hands weren’t tender—they were rough and possessive as he squeezed her breasts, then thumbed the sensitive peaks through her sweater and bra. Amanda broke their kiss to rip the fabric over her head. In a flash, he reached behind her to undo her bra. Once the garment was unhooked, she shimmied out of it and gave him a seductive smile.

Her reward was his groan and the throb of his cock against her sex. God, she felt alive, more than she had in years. The lovers she’d taken hadn’t been men she’d liked, they’d been chosen to piss off her parents, especially her mother. The more unwashed, anti-social, or dangerous—the better. Looking back, Amanda felt a pang of regret for all that she’d lost, but promptly squashed it. Although the New Year was just around the corner, no one said she couldn’t get a jump start on her resolutions with this incredibly sexy guy.

Soft feathery kisses stroked down her neck and she arched, anticipating the warmth of his mouth on her breast. He licked her left nipple and then blew on it softly, watching with hungry eyes as the peak hardened. When he finally sucked it deep into his mouth, desire shot to her core. She ground her sex against his arousal, imagining his thick cock entering and then filling her. The surge of need nearly sent her right over the edge.

Lifting herself up, she reached for the snap of her jeans, anxious to rid herself of the confining clothes. His fumbling fingers joined hers, then, she remembered that pesky resolution. Physical satisfaction was the answer to her body’s needs, but what about her emotions? With a slight feeling of regret, she playfully slapped his hand away. She wouldn’t go all the way with him, not tonight, but that didn’t mean they couldn’t have fun.

“Naughty, naughty. You wouldn’t want to get dropped off Santa’s nice list, now would you?”

He reached for the waist of her jeans again. “Amanda, I was naughty before nice was even invented.”

She giggled. “Even so, I’ve decided that this year, I’m going to be good.” She worked her hand down the waistband of his sweats to caress the thick length of his cock. “Very, very good, indeed.”

Ericka Scott is a multi-published, bestselling author of seductive suspense. She's written stories for as long as she can remember and reads anything under the sun (including the back of cereal boxes in a pinch). She got hooked on romantic suspense in her college days, when reading anything but a textbook was a guilty pleasure. Now, when she’s not chauffeuring children around, wishing she had more than 24 hours in a day, or lurking at the library, she’s spinning her own web of fantasy and penning tales of seduction and suspense. She currently lives in Southern California with her husband and three children.

She also loves friends, so come friend her at http://myspace.com/erickascott . She's also on Facebook at http://facebook.com/ericka.sc and Twitter @ErickaScott. You can find out more about her books at www.erickascott.com

Welcome to Beyond Romance! I've never written a demon story, I must admit, so I didn't realize that they were so popular!

Demoms are hott all year long..I read a lot and with two weeks off for the Holidays I catch up on all the books I missed during the year. I love your gift idea books. They are always on my list! Great excerpt

I'm not too sure about Demons in Christmas stories. I look for light, happy feelings at Christmas.