When I was trying to figure out what to write about today, I just couldn't go past NaNoWriMo. It's a subject that I find hard to ignore around this time of the year.

If you haven’t heard of National Novel Writing Month, it’s always set in November. It’s a time of the year when a whole bunch of people from all over the world come together with the joint goal of writing a 50,000-word novel during the month of November. Or at least, a first draft.

I know there are some people who don't like it because they don’t like the pressure, and find it stifles their creativity. There are even some who find this process encourages them to write garbage that’ll end up stuffed in a drawer somewhere, or forgotten on their computer. Then there are others who absolutely love it, because they like a challenge, or manage to drum out a first draft in no time anyway.

Personally, I love it. This is the fifth year that I've taken part. I've actually won every year so far, so I'm hoping that the same happens in 2010. As it stands, while I'm writing this, I've already passed the 44,000-word mark, which is awesome for halfway through the month.

See, I write pretty fast drafts anyway. When I've got a story boiling over inside my head and it's ready to be told, I become consumed by it—live, breathe, think, and even dream about it, until that last word is written. I like to get everything out of my head and onto a Word document as quickly as I can, so this process works for me. And this year's story is turning out to be the same.

To be honest, I usually decide on the story I'm going to write in about August/September and then spend some of October taking notes and planning a bit. This year didn't turn out that way. I’ve been doing so many edits and revisions that I hardly thought about NaNo.

I actually didn't seriously admit to myself that I was going to take part until pretty late in October. How could I pass it up? Even if I knew I'd be getting a bunch of edits for other stories sometime this month, I at least wanted to give it a go. Like my husband said to me: “What's the worst that can happen? You either end up with the beginning of a story, or actually finish writing another book.” Exactly! Why didn't I think of that? ;) Sometimes it takes someone else to point out the obvious, that’s why I usually chat with my husband when I’ve come to a crossroads in my writing plans, or am wondering about what to tackle next. He’s awesome like that, and helps me bounce ideas and plans around until it all makes sense and fits together.

So with some multi-tasking, I've managed to do both writing and edits. It's been great so far. 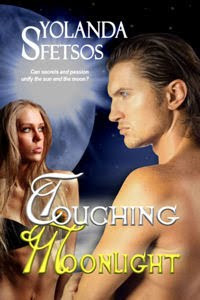 As for what story I ended up writing -- well, I had a new release at the beginning of October with Eternal Press, called TOUCHING MOONLIGHT. It's a futuristic story about two clans. One's called the Lunar, the other the Solar. It's the story of what happens when a Solar female and a Lunar male end up falling in love and uncover some dark secrets together...

I loved the editing process so much that while I was working on edits with my lovely editor (Hi Andrea!) I actually started getting snippets, ideas, and an almost-complete storyline for the next (and last) installment. I always knew that Sunny & Silver would have two parts to their story. I just didn't realize I'd write it so soon.

So, here I am, having a blast writing a sequel for NaNoWriMo. I can't wait to finish it, put it aside until next year, and then get cracking on revisions until it’s ready to submit.

What about you? Are you a NaNoWriMo fan? Have you ever taken part? And if so, did it work for you? I'm always curious to hear about other writer’s experiences with the process. :)

BIO: Yolanda Sfetsos lives in Sydney, Australia with her husband, daughter, and cat. She loves to spend most of her days writing stories. Her muse doesn't like genre restrictions, and loves to toe the dark, otherworldly edge of storytelling.

When she’s not writing she spends as much time as possible with her small family. She also enjoys watching movies, TV shows, anime, going for walks, and reading.

I am not a writer but follow along with others to see what is happening. I imnagine some woulf thrive under the pressure while other would feel stifled. I wish you lots of luck and a big congrats for participating. debby236 at att dot net

Best of luck with your writing... I am not a writer, but if I was I would probably fall under the category of not liking the pressure!

Lisabet, thanks for having me here today!

Hi Debby and Colleen! Thanks for reading my NaNoWriMo post. I agree, it just depends on what kind of writer each person is.

Since I wrote this blog post, I actually reached my NaNo 50k goal and even managed to get the story done at just over 56k. So, yay! Like I said above, NaNo really works for me. :)

Wow! Congrats on hitting your goal and blowing past it, Yolanda! I think NaNo works well for some writers, and for others, it's just too much focus on the word goal :) I've never taken part in NaNo, but certainly cheer writers who do, and love enjoying the results when I read their new books!