Where Are All The Lesbian Vampires?

Ever since Bela Lugosi first donned cape and fangs and exuded on the silver screen a sense of raw and tortured sensuality, vampires have been seducing and biting their way into our hearts in a way that no other creature of the horror genre has. Nor, I suspect, will they ever, despite the best efforts of Taylor Lautner and his abs. Today, the classic cape and preternaturally black hair combed into a fang-sharp widow’s peak may have disappeared, replaced by stylishly handsome blonde Vikings in Armani suits and impossibly chiseled perpetual high-school boys, but the raw sensuality and the sense of something dangerous lurking just beneath the handsome surface very much remains unchanged. The vampire novel has become a whole genre in its own right and with the astounding success of authors like Charlaine Harris and L.J. Smith, more and more women in mainstream fiction are taking up pen and blood-red ink on behalf of the vampire.

I think that acknowledging an attraction to vampires requires a willingness to also acknowledge the darker aspects of one’s own nature and sexuality. For a human, loving the vampire is never going to be easy. It is an effort always touched by the heart-breaking knowledge that your vampire lover will remain young and beautiful whilst you age, wither, and eventually die, and they will then move onto another beloved. Unless your vampire lover turns you into one of the Undead, in which case your relationship is almost certain to end in the highest of gothic tragedy … after all, it is a tall order to remain in love enough with someone for several hundred or even thousand years and not be driven to distraction by their annoying habits! It is this essence of doomed love gives vampire fiction its romantic potency. The more immediate sexy sensuality comes from the underlying danger of the vampire lover and his/her overwhelming strength and speed, ability to compel, and of course deadly bite, the knowing that he/she could lose control at any time and suck you dry, and the dark, shivery delight taken by a secretly kinky part of you in walking that line with them.

Lesbian readers do say that they would like to see more variety in the stories and characters of lesbian fiction and, although this desire for difference extends to other genres, I shall stick here with addressing that of the ( non erotica-specific ) vampire novel and only those appearing in print since the e-publishing world has a much broader scope. There are a very many lesbian fans out there of the novels of Harris, Smith, and Meyer, and the TV shows/movies made from those. Why then are the established lesbian print publishers reluctant to give their readership a lesbian-friendly place on this popular bandwagon? I can’t promise to answer this question with certainty, but I can speculate. There is at the helm of the lesbian publishing establishment today a strange mingling of an older radical feminist ideal of power and status equality between women and a newer girlish eagerness for fairytales of sweet, gentle romance and ever-lasting civil partnership with Princess Charming to come true, and this is reflected in the choices of books being printed. One wonders then if there is a biased impression amongst those at the helm that all lesbians today would be made equally uneasy by the notion of being sexually aroused by a character such as the vampire? A creature who holds the power to ‘change’ their human lover, irrevocably and for all eternity, who can compel and dominate, and even hurt or kill. Certainly, the unequal power balance of a human-vampire relationship would kick against any such feminist or fairytale sensibilities.

Or could it simply be a lesbian publishing establishment reluctant to bestir itself to look into those writhing, smirking shadows wherein lurk these hungry blood-sucking fantasies, content instead to rest upon its laurels, oblivious to the desires of its readership for anything different? 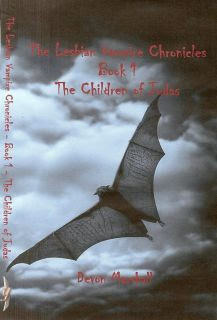 My own writing in the vampire genre may be rooted in a comedic vein, but I do not shy either from allowing my lesbian vampires to flex their super-strength Undead muscles, and they love just as all good traditional, high-gothic vampires do: possessively, jealously, and with a physical intensity that does leave marks! Loving the vampire, for me both as a writer and as a fan of the genre, simply cannot involve happily-ever-after. Even happy-in-the-moment must always be grounded by the sobering reality that your vampire lover could kill you with an over-enthusiastic love bite, or could be killed herself by a carelessly wielded sharp wooden object. I do not go out deliberately to be controversial, nor to try to change the world or upset any particular groups of people. However, I do occasionally enjoy, in my own small ways, challenging any establishment has grown out of touch whilst resting upon its laurels and I am as resolutely unapologetic about this as I am for my bad puns when I say that it s high time for the bad-ass sexy lesbian vampires to come out of the coffin and stake their claim to a place on the bandwagon!

Devon Marshall is the author of ‘The Lesbian Vampire Chronicles’ series, Book 1 of which, ‘The Children of Judas’ ( ISBN 9780956584717 ) is now available from Amazon UK and the author’s website at Devon Marshall Writes Devon is currently working on the 2nd installment of ‘The Chronicles’ and on a new series featuring a New Orleans PI. You can visit her entertainment-related blog at http://wwwdevonmarshallwrites.blogspot.com Devon lives on a remote and rugged Scottish island with a loyal housemate and a large dog and enjoys reading and TV.

What a good point! Never thought of that before. Where are they all?
debby236 at att dot net

I've noticed a distinct lack in lesbian romance period. It would be interesting to start a running list of the stories we do know of in the vampire genre.

Thanks for the mind bend. :)

That is interesting... something I never stopped to think about...

I hadn't thought much about that, but an excellent question--it would seem that fans of GLBT would also appreciate the paranormal!