When I decided to write my first paranormal romance I looked no farther than what I’ve been doing already: horror. It was a no brainer for me.

I’ve read paranormal romances where the vampire didn’t drink blood nor do bad things. Let’s admit it, European vamps drink blood—humans are food for goodness sakes. I also had a problem about a vampire getting together with a human—necrophilia came to mind for me. My first vampire romance was set not only in the future but on another planet. The hero was the last Undead Earth vampire in existence and he had to escape from Earth to another world as pollution had killed all the others of his kind. It was on that new planet that he met his ‘soul mate’, Nalessa, a living alien vampire. She was the last survivor of her civilization, which perished eons ago. That story became Crimson Promise. This got published by Phaze Books.

Since then, I've overcome my issues and written a vampire with a human romance story, which also was a second chance at love for two lovers separated by terrible circumstances. This came out in the anthology, Just Another Paranormal Halloween, published by Mojocastle Press, LLC as both an eBook and paperback. 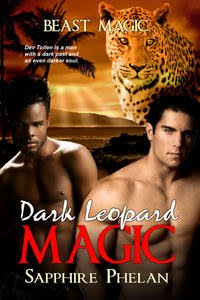 More recently, Phaze has released my book Dark Leopard Magic, another foray into the paranormal. Here's the blurb:

Dev Tollen is a man with a dark past and an even darker soul. More than that, he's a gay wereleopard. He has never had the Dreaming and never met his true mate. But one night the Dreaming does come and reveals his lover, an African man named Montsho, also an alpha black wereleopard. Montsho will fight their love and their destiny. Dev will do all he can to win his beloved's heart and keep him by his side always. Then a ghost begs Dev to solve his wereleopard lover's murder. Both men will find that their new-found love tested and their lives in danger. Their idyllic time in paradise is about to be torn asunder when they discover who the murderer is.

Monsters are scary. We all are afraid of the dark. What better way to conquer that fear of the dark then have the heroine or hero fall in love with a monster? You have the bad boys or girls in contemporary romance novels, but this takes that bad idea and makes them even more bad assed.

Besides the reader wants to be taken away from their mundane day-to-day life and suddenly they can find that, in a tale where the heroine moves to some creepy town. Each night something or somethings are taking innocent citizens. These monstrous things are also after her. Then she meets a tall, dark and handsome man, who saves her from a pack of howling things. She falls for him. Maybe even makes love with him. It is later that she learns he’s not human, but one of those ‘howling’ things himself. He’s a werewolf, cursed to take another shape, but he’s tortured and doesn’t want to harm humans. Will she, can she, change him for the better? When she does, and both ride off into the sunset on his motorcycle (or drive off in a car or truck—doesn’t matter), the readers close the book with a snap, knowing once again there’s a happily ever after for another couple.

You don’t have to stick to supernatural creatures either. Why not an alien, whose people want to take over our world? Not just an alien, but a parasitical one? I did this with Iridescent Invasion once upon a time with an epublisher whose doors closed in 2008. One day, I hope to go back and turned this story into a full blown novel.

But it doesn’t matter what kind of being your hero or heroine is, a paranormal allows you to take chances, to go where no reader has been before in a love story. You can take the theme of racism, religion and prejudice, and add a twist by making one of the lovers a merperson or a vampire or shapeshifter. They say that love overcomes everything--well, here’s a writer’s chance to prove that.

Readers: chime in with a comment if you agree with this or not. We authors love to know what readers think since you are the one who buy our books.

Paranormal Romance Authors: Let us know what led you to write paranormal romance, and why.

Go beyond the usual, instead take the unusual that stretches the boundaries and find romance with Sapphire Phelan's aliens, werewolves, vampires, fairies, and other supernatural/otherworldly heroes and heroines.

Hi Sapphire, I love a little suspense and terror in my books. I am looking forward to reading Dark Leopard Magic. Ihave it already, now I just need the time to read it.
debby236 at att dot net

Shapeshifters, mystery and romance! Sounds wonderful and a bit intriguing.

You are a new name for me... I have to admit that after reading this post I really really want to read your books... they sound wonderful... alien vamps, shapeshifters, etc... stretch away, sounds great!

Thanks Robin and Colleen. :-D

Hello, Sapphire.
I don't usually read horror. I do read a lot of paranormal romance, and believe I might be willing to try horror as you describe it.
I write noir fiction, which can be a little on the horror side at times.
I intend to read the wereleopard book.
(and love the weekly men you post, BTW)
Kelly
marwhitpinky12@yahoo.com

As I sit wondering what it is I like about writing/reading paranormal romance, I'm reminded about what a friend of mine used to say about most movies and books: "Yeah, it's about two beautiful people who fall in love...ho-hum". I think the appeal is that flawed characters are more interesting than beautiful, rich, successful characters. I mean really, where is the challenge in having perfect characters falling in love with each other; what isn't there to like? Plus it adds another level of escapism, which is my main purpose for reading, to be able enter another reality all together, where it is possible for these to creatures exist. I can't wait to read your novels.

I'm sorry I missed your signing yesterday at CC. Darn flu season. Hope to see you at another soon.
Lisa
lisa@thequotablelit.com

Just get well, Lisa. I understand. There'll be others.

Hmm... Sapphire, I'm admittedly not a fan of horror, but can see how it can appeal--it can heighten the excitement in a story, and that's another way to get readers' pulses pounding :)

Since vampires and werewolves are really in the realm of horror, to have something like this as the romantic hero adds new dimension to the bad boy.

To let it be known here, Ilona was the winner of the blog tour (from all 4 blogs). Congrats to her.