While on a beach vacation with my daughter and 2.6 year old granddaughter last summer, two young women stopped by our beach chairs for a friendly chat. One of them asked my age and when I told her I was born when dinosaurs roamed the earth, she said, “What’s your secret? How do you stay looking so young?” I answered, “Blueberries and sex.”

“Mom,” my daughter cried, giving the word at least two syllables, “you don’t have sex.”

I smiled my secret smile and said, “How do you know?”

You see, kids don’t believe parents have sex. Ever. They forget that after all, in some mystical way, egg and sperm mate and form a child or two. Sometimes more. But not their parents.

When our last child went off to school, I’m talking about kindergarten, sex was the first thing we thought of when the door closed. Alone at last.

Here's a brief excerpt from my latest novel NOW WHAT?, a paranormal romance. 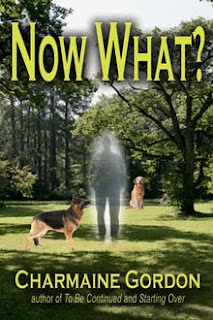 I dreamed a wondrous dream. A shimmer in the woods beckoned me closer. A shadowy shape I couldn’t resist. Without fear I moved into the shimmering layers of silver white, gold and purple. Enfolded in the sparkle of white light heat rocked my insides, shot through every opening, poured like liquid gold from head to toe until a final pulsating hammered at my feminine core. I cried out for my husband, knowing he was with me. Slow withdrawal as my heartbeat returned to normal and joy filled my life even though the glow of his spirit faded.

It wasn’t a dream, wondrous as it was, I realized the next morning. Bob’s message was clear. He watched over me just as my mother, gone for many years, still remained close. This would be another well kept secret; this gift of acceptance without fear when visitations from the departed occurred.

Thank you for inviting me to Beyond Romance, Lisabet. It has been a pleasure.

Signed copies of my books are available at http://www.Amazon.com

Bio: After years of working as an actor on daytime drama, stage, movies and television, I had an idea for a story. I didn’t realize it at the time, but I was like a sponge, soaking up knowledge as I read scripts. When I decided to write, it became an adventure. I wrote a scene, painted in the scenery with words instead of a paint brush, gave the characters direction and soon the characters took over.

I knew I couldn’t continue acting and begin a new career so I kissed the sweet time goodbye and took a chance.

Now I have three books with Vanilla Heart Publishing; TO BE CONTINUED - romance; STARTING OVER - romance/suspense; and NOW WHAT?, a paranormal romance.

Email ThisBlogThis!Share to TwitterShare to FacebookShare to Pinterest
Labels: Charmaine Gordon, Now What?

That is so funny. My kids never beleived I had sex either. But life does go on after kids. Your books look great and I enjoyed your post

Charmaine, thanks for the lovely post! And congrats on Now What? and your other releases--how exciting to see where your past work has led to you now! Best wishes for your continued success!

Charmaine, you certainly made me laugh at the thought of our kids denying that parents ever had sex - and even if they are willing to acknowledge that is how they came to be, why in G-d's name would we have sex after the deed is accomplished!

Thank you all for stopping by and enjoying a chuckle or ten with me. A sense of humor can get you through some wicked times. Keep smiling, my friends and have some blueberries.

Thanks for an enjoyable post! I could not help but chuckle and smile! Have to get my hands on your books...

Great post, Charmaine, and I love the title. Hmmm, perhaps one for a future work...

Colleen, Liz, and Jennifer-Thanks for stopping by.My books are available in ebook format and print. They are all Survive&Thrive stories about women who struggle to overcome adversity and succeed after divorce, loss, abandonment when a husband leaves a note: "It's not you, it's me. And as you can tell-all told with a dose of humor.

Charmaine, you always make me laugh! I loved this post & can't wait to read Now What?

It is weird for us to think about our parents having sex, but it's even worse, with 2 kids 18 & 22, wondering (and eventually knowing) if they are fooling around!

I love your writing! Have a wonderful Holiday!