I hesitated with regard to writing yet another blog post about Publishing (with a capital P), publishing, epublishing, and self-publishing. You can’t spit without hitting one in the e-neighborhood these days, some with robust and often vitriolic discussions taking place in the comments. They’re all variations on the same theme: the antiquated business model struggles for survival in the face of changing market. (Yawn.) Adapt or perish. The End.

Yet it is the industry and those changes that currently occupy my attention as I strive to find my niche. (Niche being defined as that which enables me to indulge my creative impulses while simultaneously providing an income to feed my baser needs for food and shelter.) The resistance to change, especially within a system that was once profitable, is understandable. Corporations – like people – cling to what has been successful in the past. It’s safe and comfortable. Change is scary.

And, in the case of books, that level of safety is in the tangible. Tangible is comforting. It can be stroked, fondled, ogled. We can point to hoarded stuff and proclaim, “Behold, my bounty!” Not so easy to do with digital assets.

At one time in our not-so-distant past, the vast majority of business transactions involved an exchange of tangible goods: gold for land, livestock for slaves, cotton for woven cloth. Books.

We, both consumers and suppliers, do not quite know how to treat the intangible product, how to appreciate its value, how to stroke it. It's a relatively new concept in terms of civilization. It requires a level of trust and a shift in focus.

That started my wheels turning about money and the progression from a cash-only consumer base to one that is now predominantly credit/debit-based.

Money lenders have been around for a long time, so banking is nothing new. People were initially wary of storing assets in one physical location to protect them from theft.

Yet, it took well over a millennia for the notion of the withdrawal of assets from a different physical location to catch on. Networks of financial institutions. Distributed assets. Distributed risks.

With technological advances in communication, came the ability to rapidly confirm the availability of consumer assets and the introduction of the handwritten check. A modern IOU. It, too, was slow to gain acceptance. Yet it was still, in one sense, tangible.

Computers made cash transactions unnecessary. Even so, there was considerable consumer resistance to the use of credit cards. They were electronic. There was nothing to be fondled.

They were also easy… and fast. No delays while checks cleared. No waiting for payday.

With the financial structure in place, the emergence of digital products was the next step in our electronic evolution. First, music. Vinyl cedes to magnetic tape which, in turn, cedes to compact disc. Still tangible, but stored on electronic media. And portable!

Digital photography enabled folks to take virtually unlimited pictures without the expense of both film and developing and… waiting. Instant electronic gratification.

One by one our forms of recorded art and entertainment transitioned to the electronic as convenience and pragmatism replaced the ingrained need for a tangible thing.

Books are no exception. In time, the tangible book will cede to its digital form. The industry will conserve resources, reduce (if not eliminate) printing expenses, and repurpose vast amounts of physical storage space. And yet books will be more accessible than ever before.

The difference is that, this time around, consumers are demanding the shift rather than having it driven by the industry. Perhaps it’s due to my vantage, but in the past, it seemed to be the industry saying to the reluctant consumer: "Try this! You'll like it. It's nifty neat-o better than sliced bread yadda yadda." With ebooks and their related gadgetry, it's the consumers saying to a reluctant industry: "Make this! We want it. Now!"

It can't happen soon enough for me. If my work touches hearts and souls and libidos, I've achieved my goal. Having it packaged in an efficient, effective, environmentally-conscious fashion is just icing on my e-cake. 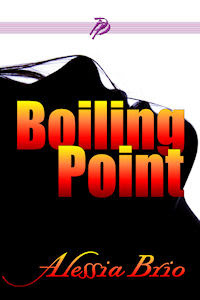 I read a lot of ebooks, but still like the feel of a paperback in my hands, convenience or no convenience.

I read some ebooks, but I buy paperback or hardback books mainly. If I had a ereader then I might read more ebooks right now I read them on my computer so they're not very conventient for me.

Thanks so much for coming by and guesting.

I have to agree that at the moment I'd rather have a physical book. I expect that will change in the future, though, as you have predicted.