A Sense of Wonder 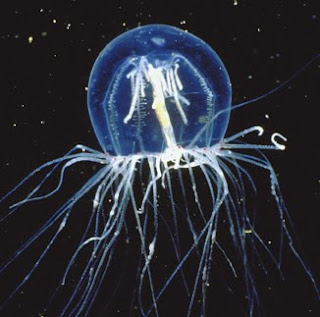 Over the weekend my husband and I saw James Cameron's new movie "Avatar" (in 2D). I'm usually immune to hype--in fact it tends to make me more critical of the hyped item. However, I have to say that, in my opinion, "Avatar" really deserves the praise that it has received. It is an astonishing movie visually, as well as having a strong but not obtrusive message. In fact, it's haunting; my dreams have included elements from the film for the past two nights.

In case you're not familiar with the storyline, here's a synopsis. Jake Sully is an ex-marine who has lost the use of his legs in some unspecified accident. His bitterness is amplified by the violent death of his twin brother, a brilliant research biologist. Jake is offered the chance to take his brother's place on a mission to the planet Pandora. Pandora has an indigenous humanoid race; biologists are studying these people by creating synthetic bodies - avatars - that merge human and Pandoran DNA and then having scientists control these bodies remotely. Jake's avatar makes it possible for him to walk again, to run again, and to experience first hand the incredible natural world on the distant planet.

The main human forces on Pandora, however, are not the researchers but a shadowy corporate entity that wants to exploit the planet's mineral resources. Jake is recruited as a mercenary and informant for the company, but the more he learns about and becomes part of the native culture, the more he understands that it is must be protected against the humans who see the Pandorans as semi-human savages. Gradually he becomes a hero who battles against his own race to save his adopted race.

The most fascinating aspect of the movie is the vivid portrayal of Pandora's environment. Pandora is covered by lush forest filled with extravagantly beautiful and dangerous creatures. Cameron manages to make the place compellingly real. The film is almost 100% computer graphics, but as you watch, you forget this. You walk through groves of huge, trumpet-like flowers that collapse at a touch; ride four-winged dragon-like creatures among mountainous crags that hang suspended a mile above the planet; watch whispering sacred seeds float through the air, pulsing like translucent jellyfish.

Pandora's human inhabitants live in literal communion with the other beings in their world, hooking their bodies to those of the animals with whom they cooperate. The world of Pandora is alive, in the sense of the Gaia hypothesis--there's a kind of global spiritual consciousness that animates all the individual life-forms.

This, too, is totally believable. I've rarely seen a film that pulled me so deeply into its narrative. When I had to get up and go to the bathroom (I had a drink with dinner before, and the film is almost three hours long!), I was astonished to discover that my heart was beating twice as fast as normal and I felt like I'd run a race--all from the adrenaline triggered by the movie!

There's action in the tale, and romance too, with a memorable warrior/priestess heroine. The villains are so intensely evil that you will cheer out loud when they are finally vanquished.

What stayed with me above all else, though, was the sense of wonder and awe.

Later, thinking about the film (it's difficult to stop thinking about it), I realized that one reason it was so believable is that the alien life forms were somehow familiar. Our own world is home to creatures every bit as strange, exotic and miraculous as Pandora's. We don't need to venture off planet to see the same kinds of crazy colors and weird forms. Consider an orchid or a Venus fly-trap, a Portuguese-man-o-war jellyfish or a boa constrictor, a mayfly or a sequoia. I can see where Cameron and his team got their ideas.

Humans used to live in the same sort of harmony with their environment as the Pandorans. Perhaps that's why the worldview of Pandora seems so right. Seeing this film made me open my eyes and look around me, at the vivid, full-color, three-D wonders all around me--and to understand just how precious they are.

Perhaps it will have the same effect on you.

I really recommend it. I can't stop thinking about it.

I don't watch very many movies because usually they're not as good as all the hype makes them out to be but I've heard so much about this one that I might just have to go and see it.

I am definitely going to see it! Thanks for the review of the movie.

The film sounds wonderful, Lisabet!
Thanks for the colorful descriptions and no spoilers!
:D
G.

It was a great movie (we saw it in 3D though, not 2D) and while I didn't think the premise itself was anything new, James Cameron certainly took the message to a whole new sci-fi level. I was also impressed that he didn't "gimmick" up scenes in order to take advantage of the 3D. No yoyos flying at your face, etc., just immersion in an unbelievably magical world. Great stuff.

I agree-- I've rarely seen a movie that lives up to its advertising.

Genella -- I wouldn't want to spoil it!! Although even if you knew the ending, I don't think that it would change te fundamentally immersive experience.

Hi,J.- You're quite right that the story line was pretty traditional. Thinking about it, I believe that part of the tale's emotional impact came from the fact that Cameron was very sincere in his retelling of this classic myth.