(Or: Genre Hopping for the Faint of Heart)

There are no two ways about it; writing is an immersive experience. When you take up a storyline, you take a plunge neck deep into a new place, a new era, maybe even a new world. You tread those literary waters-- sometimes swimming, sometimes drowning-- until you finally come up for air, soaked to the bone by the perception of that story’s unique cosmos. This full immersion is what allows a writer to think like the characters, to speak like them, to be like them. Full focus is a good thing. If we as writers didn’t submerge ourselves into our worlds, our stories would end up sounding more like a news report describing said events instead of the personal account of characters that were there when it all went down.

Some folks cringe at the idea of genre hopping. To them it’s a dangerous game played by maniacs and mad men, with nothing to be gained from spreading one’s self so thin. Others are just outright afraid of the idea, concerned that all of this leaping about will leave the reader to think that perhaps the writer doesn’t know enough about any single genre to settle down and write it well.

To both of these fears I say "poppycock"! You read that right. I just said poppycock.

As a reader, I find myself switching from genre to genre just as easily as I change my underwear. (Granted I have a lot less in the way of selection of panties than I do in books, but you get the idea.) So when it came time for me to take up the pen I found I had the opposite problem with genres that most people have. I wanted to write in so many different ways I had trouble focusing. I wanted to write everything from horror to humor to steampunk to erotica to fantasy to science fiction. I read it all and wanted to write it all!

At first it was hard, bouncing around like a rubber ball from genre to genre. I lacked focus. I lacked discipline. I still have a bevy of half-finished stories lurking on my hard drive that were abandoned when submission calls from another genre lured me away from that world. It took a good year or so for me to work out how to juggle so many different genres without losing my voice, or the finish line, in the process.

You too can cross into any genre if you are just willing to take that tentative first step to the shore, toe the water and see if it’s the new ocean you’re looking for.

How, you may ask? Well, let me tell you…

The first step to approaching a new genre is to be brave. After all, what is there to be afraid of? Maybe it’s a genre you used to write in but quit because you felt you were no good at it, or one you have been longing to get your feet wet with but worried you couldn’t capture the feel of it.

The only way to know is to just get out there and write it.

I worried for weeks before starting my steampunk series whether or not I was good enough to capture the appropriate kind of Victorian voice that makes for good steampunkery. In short, I worried someone would be able to tell I didn’t know what I was doing. (Not that I actually did know, but you see where this is going.) Then, after reading yet another steampunk novel, it dawned on me that I knew just as much as that author did about the genre. Perhaps more. At least enough to start out. So, I set my mind to an outline, which became a beginning chapter. The beginning turned into a middle, and before I knew it I had an end. All of which was steampunk at its finest.

You also need to realize that not everything you write in different genre is going to be great. In fact, you might find that no matter how hard you try you don’t have the knack for a particular genre. In this case don’t take it as a personal failure, just admit your faults and keep on keeping on. My weakest genre is hardcore science fiction. I love to read scifi, but for some reason or another I just don’t write it very well. It doesn’t stop me from trying. I view every attempt at it as a step up, and know that one day I will produce something in the genre I can be proud to share.

Nothing is worse that reading a book and knowing for a fact that the author knows nothing about the subject matter. As a reader you can tell when the author is winging it, so why try to do the same to your readers?

For example, steampunk is fairly new to the romance scene. As a result I had that on my side when working on my piece. I could have just as easily faked my way through the novella, because I knew so many of the readers were unfamiliar with the territory. How would they know the difference between an airship and a sea bound ship? I could just throw out a few buzzwords like ‘clockworks’ and ‘spinning props’ and let their minds fill in the gaps.

But in my heart I knew I would never be satisfied with that. Not to mention this was a great opportunity to draw new fans to the world of steampunk literature, a genre I am very passionate about sharing with others. (I am a crazy woman when it comes to steampunk!) The point is, if I planned on doing this thing, I knew I had to do it right.

Research your genre well before you take up a story. Watch movies, listen to related music, and most importantly read, read, read books by great authors of the field. Don’t be afraid to be influenced. The greatest compliment I ever received was to be told one of my novels sounded like my favorite author had a hand in it.

Some folks look at genres like a compartmental meal. Nothing is allowed to touch, or they just can’t consume it. Like eating cornbread that’s been soaking in pinto beans. (Actually, come to think of it, that sounds pretty good!)

Writing is along the same cornbreadish lines. It’s okay to allow the borders to meld at little. To me, and a lot of other readers, genres are more fun when they mix. Humorous horror has become a favorite of mine lately, to both read and write, and I have been considering writing some steampunk horror just for fun.

Richard Brautigan, one of my favorite authors, was known for his deliberate genre mixing. He delved into such unique ideas such as the gothic western and the perverse mystery. He conquered these genres with pure literary genius, blending them in ways that leaves the reader breathless as to where one ends and the other begins.

When you set out to write in your new chosen genre, do so with the knowledge that it’s okay to let a little of one leak into the other. In fact, use your strong background in your existing genre to help ease yourself into the next.

With these three weapons in your writing arsenal you can confidently approach any genre you like. Perhaps it’s time to set aside paranormal fantasy and tackle that serial killer story that has been lurking around in your mind, huh? Just remember to be confident, be prepared and be adaptable.

I wish you luck with your genre hopping adventures.

By the way, I will be giving away a free copy of my book Flirting with Death to one lucky commenter. So tell me what you think about multiple genre authors! 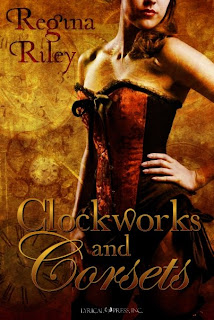 Coming in March from Lyrical Press

About Regina: Aside from her wicked imagination, Regina believes that her life is pretty pedestrian. She resides in North Carolina, although her roots spread a bit deeper thanks to a military upbringing. She is an identical twin, and has been happily married for thirteen years to a wonderful and giving husband. She also shares her home with a brood of moody cats. As a crocheting fanatic, she can just as likely be found wrist deep in a skein of yarn as opposed to hip deep in writing her next tale.

Email ThisBlogThis!Share to TwitterShare to FacebookShare to Pinterest
Labels: Clockwork and Corsets, Regina Riley, The Blooming

When I find an author I like I enjoy it if they write in different genres!

When my favorite authors choose to write in different genres I'm always happy to have different books to read depending on my mood. Yes, I like them!

Poppycock rolls off my tongue with joy and so I will join you in the exclamation. Multiple genres simply reveal different recesses of the author's mind... and once you learn to love one dark corner the others tend to beckon to you.

Thanks for the comments guys! I'll pick a winner amongst you and let you know on Monday who gets the PDF of Flirting With Death.