Married in Iowa...and the Five or Six Other Entities that Recognize It 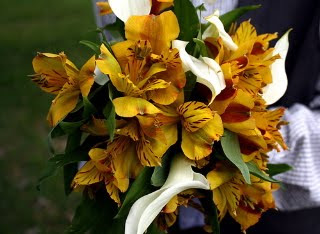 2009 was the year that put same-sex marriage on both the public radar in the U.S. and our personal radar as well. Prior to that, while my partner and I were supportive on the issue, we hadn’t really considered as an option for us. We live in Minnesota, which has a very conservative governor and a legislature too afraid of him to push for change. Even if we got married elsewhere, none of the legal benefits of marriage would apply to us, so what was the point?

We had, on the other hand, been together for fifteen years as of January, 2009, and we did register with the city of Minneapolis as domestic partners in February, 2009, so we were definitely not lacking in public commitment. In fact, given the longevity of our relationship, the shared cats, the house and so forth, we felt pretty married already, even without the ceremony.

But then, on April 27, 2009, the Iowa Supreme Court ruled in favor of same sex marriage (applying only to Iowa, of course). A friend came up to visit from Iowa on the day that the ruling came down. At dinner, she uttered the fateful words, “If you guys decide to do it, I want to be your flower girl.” We looked at each other. We originally met in Iowa City, Iowa, at women’s country western line dancing in the Unitarian Universalist Society basement. We had friends there, eager to see this happen. We also suspected that the better financial results that Iowa saw from “marriage tourism,” the more likely they were to keep it. We thought, “Why not?”

We mentioned it to a few friends and things snowballed with people volunteering left and right. Since Iowa has a three-day waiting period minimum between license application and ceremony, we took a road trip down to scenic Decorah, Iowa in August with our pal Rebecca as our witness. The court clerks were very charming and helpful about it, which made it all that much more lovely. We also settled on a park shelter in Iowa City in one of our favorite parks for Sunday, September 19th.

Everything between license and ceremony was a whirlwind – where to stay, food, what to wear, ordering our rings from artist Laurie Edison, flowers, vows. But when the big weekend rolled around, we were settled in the Brown Street B&B in Iowa City, clothes, flowers, rings, officiant and his wife, and all (except for our Man of Honor and Best Maid, who had to stay in Cedar Rapids due to the onset of football season).

The wedding party was quite splendid. Our officiant wore his finest top hat and a borrowed rainbow stole. Our Man of Honor and Best Maid wore their best Goth finery while our ring bearer and flower girl wore cute matching polyester outfits from Kmart. My fiancée wore a nice gray wool jacket, black shirt and pants while I wore a green silk ensemble purchased in Vegas a few years ago.

The actual ceremony had about twenty guests in attendance and was wildly nondenominational. We committed to each other, but no one promised to obey and we dropped the references to richer and poorer. We had quotes from Ursula Le Guin and Elizabeth Barrett Browning. I was not permitted to re-enact the wedding scene from the “The Princess Bride,” which was probably for the best. The weather and the bouquets held up splendidly, and we were pronounced “Spouse and Spouse.” Afterward, our friends served everyone from a terrific soy wedding cake (in deference to our dairy allergies).

I keep being asked if it feels any different and I’d have to say yes and no. Our day-to-day relationship is pretty much the same, except for the rings and the vocabulary. “Wife” doesn’t come easily after a decade and half of “Partner.” And, of course, we still have all the same concerns about insurance, legal issues, taxes and so forth that we had beforehand.

The biggest change has been in the way that my new in-laws treat me. They are small town Utah-dwelling Mormons with very conservative beliefs. We’ve basically ignored each other, with a certain amount of hostility, for fifteen years. Still, despite their enthusiastically expressed misgivings about our nuptials, they were quite supportive when it came down to it. I’ve had a number of notes and calls assuring me that I’m an acknowledged part of the family, which I will freely say, have been a bit surreal though kindly meant. 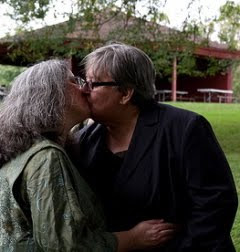 Overall though, we’re thrilled that we were able to celebrate our love with the support and good wishes of our friends and families. Between the wedding and the reception a few weeks later, we got to bring together a diverse group of folks from very different backgrounds to celebrate our relationship, and that felt marvelous. So, thank you Iowa Supreme Court, for giving us the push we needed to go through with it.

I haven’t written any same sex marriage fiction yet, but I wanted to plug some of the other writers who are. All of the following are raising money so that some day everyone can marry the beloved of their choice:

I Do: an Anthology in Support of Marriage Equality (MLR Press)

To Love and To Cherish (Loveyoudivine Press)

And thanks to Lisabet for encouraging me to write about getting married!

BIO: Catherine Lundoff is the award-winning author of Crave: Tales of Lust, Love and Longing and Night’s Kiss: Lesbian Erotica, and editor of Haunted Hearths and Sapphic Shades: Lesbian Ghost Stories. She is also the co-editor, with JoSelle Vanderhooft, of the anthology Hellebore and Rue: Tales of Queer Woman and Magic (Drollerie Press, forthcoming). She teaches writing classes at The Loft Literary Center. Website: www.visi.com/~clundoff

What a lovely account, thank you for it. May I wish you a happy and long life together, as you surely deserve? And thank you for plugging the anthologies I DO and I DO TWO. I have a short story in I DO TWO. All proceeds go to Lambda Legal to help them work for marriage equality.
Bruin Fisher
http://www.bruinscave.org.uk

I'm so proud and happy for you! Live long and prosper!

I usually say that I don't even understand straight marriage, but it's just a joke. Congratulations. It's a beautiful post and I'm sure it was a beautiful wedding.

Congratulations on your marriage!

Thanks so much for guest blogging and for being willing to talk about such a personal topic. I think (hope) that making the issue personal might go someways toward increasing public acceptance.

Thanks for sharing your special day with us! Congratulations!

Congratulations, Catherine! What a wonderful story, and exactly why we keep fighting for everyone. Thank you for mentioning "To Love and To Cherish" which is donating all proceeds to Marriage Equality USA

Beautiful (both the account and the wedding ceremony)! Congratulations!

Congratulations and welcome to the (unfortunately rather exclusive) club of same-sex married couples! My wife and I just celebrated five years of legal bliss ourselves. :)

Congratulations, Catherine, and LOL about the Princess Bride! Hope you have many (more) happy years together. I've never understood why people feel threatened by same-sex marriages. I've been married for almost 32 years, but I don't feel my relationship with my lovely husband is threatened by it. In fact, I think any marriage, same sex or opposite, strengthens the entire institution.

Congratulations to you, and I wish both of you long, long lifetimes filled with love and laughter. I love your account of the wedding, and what I'm struck with are the similarities to so many "acceptable" heterosexual weddings. We are all worthy of and deserving of the relationships we seek, and I'm keeping my fingers crossed over the current court case here in California. But politics aside, it sounds as if you had an absolutely perfect day--what fun!

Congratulations to you both!!! I loved reading this post. xoxo

Thank you all so very, very much! I really appreciate it and look forward to sharing your comments with Jana. :-D
And huge congrats to heavenscalyx on your recent wedding!