I've been on a stupendous kick this holiday season. It all began with the release of my first Christmas story at Total-E-Bound titled Stupendously Yours. I got in such a festive mood writing this story that it kept on going. My kids and I have started a new little tradition each night. We settle down with a cup of hot chocolate in a living room lit by candles and Christmas lights and watch Christmas movies every night. We've watched everything from the classic cartoons to the modern Hallmark and ABC originals and it's been great fun! In a time when the economy is rough and spirits are low its great to take an hour or two to push all worries aside and simply enjoy the holidays. I hope everyone has at least one opportunity to do just that this holiday season. May you and yours have a stupendous Christmas!

Zoie and Nash have a stupendous Christmas of their own in Stupendously Yours.

Tired of mediocre sex, Zoie is hot for adventure. When she can't find the excitement she craves in the men around town, she reaches across the world to the one man who's ready and capable if not willing to take her hormones on a fanciful journey to Multiple Orgasmville. Zoie Qwin never managed to snag Lieutenant Commander Nash Beagan's sexually daring heart, but Lady Zest in all her erotically written letters has.

Living out her escapades in a pen and paper relationship with her fantasy man proves to be enough, until Nash, home on a short leave, takes the stage at a male Christmas auction. Lady Zest is ready to break the bank for the Christmas present of the millennium, but Zoie wants the wicked desire in Nash's bedroom-blues all for herself. A snack in the parking lot, a drink at the theatre, and a window feast next to the Christmas tree delivers exactly that, until Zoie realises her cover's been blown and Nash is out to make her and Lady Zest stupendously his forever.

Zoie froze with her glass halfway to her lips. Dear God, could it be?

“Let’s get those crisp bills crackling and those credit cards humming for the soldier of our town we all know and love.” The announcer drew it out, building the suspense and nearly causing Zoie to go into cardiac arrest. She felt faint with the possibility. Was the room really beginning to spin?

“Ohmigod.” Zoie put down her wine glass, certain she’d had enough alcohol. She’d kidded herself into three shots and was working on her second glass of wine, all with the stupid notion she’d drink enough to fool herself into thinking Mr. Surprise was Nash Beagan. Except, the combat boots, BDUs, shirtless torso, and smug smile walking onto the dance floor was Nash Beagan.

Everything inside Zoie ignited in sensory overload of desire. Her nipples beaded as her gaze moved over the deeply tanned ridges of Nash’s chest. Her hands tingled to glide over the wide expanse of his shoulders. Her teeth ached to nibble on his strong jaw. Her tongue pulsed to lick his full, arrogantly tilted lips. But when her gaze reached his danceable bedroom-blues beneath the fuzzy white rim of the Santa hat, her pussy released a surf of moisture that drenched her panties.

“You’re looking for a change from the ordinary, sister, there you go.” Dalia had to yell for Zoie to hear her over the cacophony of ruckus Nash’s presence exuded from the club of women.

“Time to boogie,” she muttered and held her sixty-nine bidding paddle high in the air. Perhaps the number had been an omen after all. Her rapidly aching channel convulsed at the thought.

Whatever the flicker of reaction, all sound, thought and breath left her as their gazes locked and held. Dimly she noted the rising of the bid and the screaming of her bank account. Only when the auctioneer shouted his, “Sold,” and pointed at her did she blink and the slow, seemingly satisfied smile that curved Nash’s lips nearly made her orgasm on the spot.

“I can’t believe you bought him!” Dalia bubbled more than the glasses of champagne being served a half an hour later as they stood once again in line, this time working their way to the payment table to settle their ‘purchases’. “Question is, now that you’ve got him, what are you going to do with him?”

Zoie ran her tongue over her teeth and let the grin spread her lips. “Enjoy him.”

“Great answer!” Dalia hooted with laughter. “For the price you’re paying, he better give you a hell of a ride.”

Zoie slid her Visa card through the fingers of one hand and drank from the champagne she held in the other. She had to force herself to sip the cool bubbly rather than gulp because, despite her show of confidence, her insides were reaching a quivering boil. Had she lost her mind? She’d maxed out her credit card on Nash Beagan!

For a good cause, she reminded herself as she stepped up to the table and handed Santa’s helper her Visa. She winced at the total on the printed slip as she signed on the dotted line. She’d definitely broken the bank tonight.

Zoie handed over the slip, took her copy and card and shoved both in her tiny handbag. She saw Dalia and Travis first as she moved away from the table and took a step in their direction. Her steps faltered when her gaze slammed into Nash’s as he walked up behind Travis.

What have I done?

The first slivers of panic leaked from her shuddering stomach to poison her veins. I can’t do this. I can’t be alone with this man in the flesh. What in the name of Christmas was I thinking?

Exchanging months of provocative letters with this man she hungered for more than chocolate was one thing. He didn’t know she’d written all those heated fantasies. But she couldn’t hide her identity when she was face-to-face with him. Well, not quite face-to-face given their height difference. Eye-to-collarbone would be more like it, breasts-to-rigid abdomen, belly-to-groin…

She forced herself to take another step and wondered that she didn’t teeter on her heels. Or run, she thought frantically. Running would be smart right about now, safe. It would preserve both her dignity and her secret.

That same slow smile that melted her panties from the dance floor unfolded on Nash’s lips as he neared and a trickle of wetness slid down her inner thigh. Dignity was entirely way over rated. As for her secret, perhaps she should reveal all about Lady Zest. What was the worst Nash could do, laugh at her? He’d always been too much of a boy scout for that. It was one of the many things about this amazing man now less than two feet from her that had stolen her heart. He could be almost unbearably kind.

But even kindness skirts on the edge of adventure sometimes.

Yes, and it was that adventure she’d just paid a pretty penny for tonight. She wouldn’t acknowledge the tightness behind her breastbone telling her she’d paid for more than a little fun. She’d paid for hope, for more. What she got was this moment and any memories she could manage to store before morning.

She had to get a handle on this nervousness because she didn’t have a moment to waste. 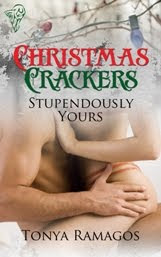 Tonya Ramagos is a bestselling author of contemporary, fantasy, paranormal and cowboy novels. She spends most of her time in a fictional world dreaming up hot hunks and head-strong heroines. When she's not writing she's reading. Anything from legal and military non-fiction to any genre of romance can be found on her bookshelves and flash drives. Her music tastes are just as varied with artists ranging from country to rock to heavy metal loading her MP3 player. A wife and mother of two fantastic boys, she enjoys playing games, dancing, and walking the nature trails around her home in Harrison, TN.

Email ThisBlogThis!Share to TwitterShare to FacebookShare to Pinterest
Labels: Stupendously Yours, Tonya Ramagos

That's a great Christmas tradition...My Mum & I actually do something similar except we watch movies that we haven't had a chance to see during the year...mostly action flicks.

The Christmas story sounds just like the thing to read during these cold winter evenings.

I loved the excerpt and can't wait to read the book.

Thanks for the post.
Tracey D
booklover0226 AT gmail DOT com

Great sounding read!! Wonderful Christmas traditions. I love traditions. My family has many also. I love this time of year!!

This was one of the best excerpts that I've read in a while and I can't wait to read the book.

Great excerpt. I need to read the book now!

I love X-Mas Movies two.Hope you are Having a Great Holiday Season.and Have a Happy New Year Two.
sasluvbooks(at)yahoo.com

Need to go to the site and look this book up. Excerpt is intriguing. Thanks

Tonya is the fashizzle!!! She writes some seriously hot hot hot stuff and is one of the nicest people ever too!!!

Another awesome looking read that I have to add to my tbr pile!