Before I get started with this post I have to throw out not one but two very sincere 'thanks' -- to the same person.

Lisabet gets the first because she was so nice to ask me to writes something for this blog, and she gets the second because she's been fantastic to work with on a very special project -- which brings me to the subject of this post.

Alessia Brio and Lisabet have been working on Coming Together, a series of books by a wide range of writers, where the profits are going to be donated to charity. Alessia and Lisabet asked me to join in -- always a way to get me to do anything -- so I, with Lisabet's invaluable help, have put together a collection of brand new and never-before-seen as well as some of my (I say this with tongue firmly in cheek) "classic" short stories.

The subject has become "the" issue these days. Even bringing up the idea can make otherwise brave men and women tighten up with fear and stress.

Don't believe me? Then pay attention to your own reaction when I say (or write) this single word:

See what I mean? I know, I know, Planned Parenthood is more than just that one tension-inducing word, and that's another reason why I chose them to receive the profits from my Coming Together collection. For decades, the folks at Planned Parenthood have been on the front lines, fighting for child health services, affordable health care, sex education, and reproductive health. Those issues, alone, make PP worthy of not only financial support but also tremendous respect.

But, for most folks at least, their support for education and sex health isn't what's made them a kind of outlaw in the world of non-profits. That tightening-word is.

Freedom is always worth fighting for, especially when it's for a fundamental right. It's never been easy for Sanger or her organization, which is why it needs as much support as it can get. I am fortunate to have a way, through this collection of stories, to give them a most-likely pathetically small amount of financial help.

Beyond this, though, the issue is a personal one. Yes, I support a woman's right to chose but I also support a total access to abortion -- even if unbiased and comprehensive sex education and access to birth control becomes universal. I have known far too many women -- as well the men involved -- who have faced the fact that they would either have made poor or even disastrous parents.

Pain, abuse, brutality -- and other nightmares -- for anyone, let alone a child, should never be the punishment for either a reckless or accidental pregnancy. Don't worry, I know the arguments, the adoption success stories, the "I thought about abortion but I'm glad I didn't go through with it" quotes, but the fact is that there are far too many children being born into horror because their parents did not have either the physical access or emotional resources for any other option.

Yes, Planned Parenthood has become a kind of pariah, a pretend-it-doesn't exist organization, but this is why it needs as much financial and emotional support as it can get: they are fighting for everyone to have access to sexual information and reproductive health but also for women to be in control of their own bodies.

But more importantly they are the resource for those who need them most, those who must face the truth of who they are, and if they truly can either have, or give someone else, a worthwhile life.

I just wish I could do more. 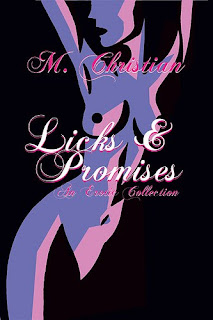 M.Christian is an acknowledged master of erotica with more than 300 stories in such anthologies as Best American Erotica, Best Gay Erotica, Best Lesbian Erotica, Best Bisexual Erotica, Best Fetish Erotica, and many, many other anthologies, magazines, and Web sites. He is the editor of 20 anthologies including the Best S/M Erotica series, The Burning Pen, Guilty Pleasures, and others. He is the author of the collections Dirty Words, Speaking Parts, The Bachelor Machine, Licks & Promises, Filthy, Love Without Gun Control, and Rude Mechanicals; and the novels Running Dry, The Very Bloody Marys, Me2, Brushes, and Painted Doll.

ANNOUNCEMENT (from Lisabet): Jennifer who commented on my post on 18 December, you are my winner. Please email me at the address shown in my post of 14 December.

What a beautiful post, and thank you, M., for such a beautiful gesture. I look forward to purchasing the book not only to read it :) but also so that I also can support Planned Parenthood via this channel as well.

Also, regarding the financial amount they may receive from this endeavor — "Every little bit helps" may seem a cliche, but I have worked in the nonprofit industry as a fundraiser (in reproductive rights, as a matter of fact), and I can assure you it is true, and it does all add up. So thank you for this.

And thank you, Lisabet, for hosting/bringing us this post!

I fully agree with the concept of planned parenthood. To become parents is a huge responsibility and should not be forced upon someone who is not ready for it.

Planned parenthood offers a wide range of services and wants women to have access to information first to make the best choice for themselves. Good luck with the release.

This was a thought inducing post. I think many people equate PP with abortion. PP does so much more, just like you stated in your post. I only wish more people knew..

Great post.
I fully agree with the concept of planned parenthood.

I think, now for sure, the way the world is you definitely need to plan out having children!! You owe it to yourself and to the child you bring into this world.

Sometimes your planning don't work. Birth Control can fail but you don't love them any less. There are some people that should never have any children. That also goes with pets