An Interview with Kyle McLaughlin 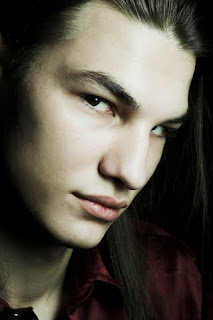 Kyle: No problem. I used to be kind of shy, but now that Rob and I are together, I'm becoming more comfortable around other people.

Interviewer: I understand that you are a gifted individual, with special powers. Can you tell us more about this?

Kyle: I have the power to see the future. Visions come to me, usually of some terrible disaster. It's like I'm there, living through the horror with the victims. This ability is more like a curse, actually. However, I've been learning to control it, with help from my teacher Elspeth and my lover Rob. Now I can sometimes navigate through time deliberately, change my point of view and discover the details of the future crisis so that it can be prevented.

Interviewer: How long have you had this power?

Kyle: I was probably born with precognitive talent. Elspeth tells me that psychic abilities are usually hereditary. I don't know for sure, though. My parents died in a car crash when I was only six, so I never really had the chance to find out whether they were special, too. I began seeing the visions when I was thirteen, just about the same time I started getting hard-ons. I gather that Mary, Rob's sister, first experienced her telepathic powers at puberty also. And it turns out that Rob has his own psychic talent. But I don't want to spoil the story for the readers by saying more.

Interviewer: You've mentioned Rob in the answer to every question. Tell us more about him.

Kyle: Rob saved my life. I was homeless, on the street, trying to drink myself into oblivion to escape the awful pictures in my mind. Then Rob showed up. He's a cop. He picked me up, brought me to the hospital and then home. I was attracted to him from the first time I saw him, but he resisted me for a long time. He thought that I was too young for him, that I needed an authority figure more than a lover. (Chuckle) I managed to convince him that he was wrong...

The sex is fabulous. He can do anything to me and I'll adore it. But that's not the heart of our relationship. Rob and I have some kind of spiritual connection. I felt it the first time he touched me, and he did, too.

Before Rob came along, I was nothing. People thought that I was just a crazy bum. My visions really scared people. I even upset the other guys in the homeless shelter. Rob changed all that. He gave me love and support. He gave me a home. You can't imagine what a difference that's made.

Interviewer: You seem to have a lot to say about Rob...

Interviewer: Can you give us more information about the book?

Kyle: Well, I don't want to give away too much of the plot. But it has some aspects of a murder mystery, and even a bit of horror. Of course it has a happy ending, but it very nearly didn't.

Interviewer: And I gather that it's a holiday tale as well?

Kyle: Yes, the book begins in November and ends on Christmas Eve--with a traditional white Christmas. The story takes place in Massachusetts, in the city of Worcester and the rural village of Petersham. So it includes a certain amount of New England winter weather. In fact, if you want to read an X-rated excerpt involving snow, you can just click here.

Interviewer: In all fairness, I should warn readers that the book is quite explicit. The publisher rates it as "total-e-burning", which is the second highest heat rating available.

Kyle: Yeah, well...what can I say? Rob and I can't keep our hands off each other. And you know, I think that's the way it's supposed to be.

Interviewer: Well, thanks for sharing your thoughts. We'll be looking forward to the release.

ANNOUNCEMENT: Sherry, you're my winner for the 18th of December, and Lindseye, you are the winner for the 19th. Please email me your postal addresses! And congratulations!
Posted by Lisabet Sarai at 4:02 AM

I liked the interview and the excerpt was GREAT!

I really enjoyed the interview and the excerpt.

Fantastic interview! Great to learn about one of your characters. Boy is he pretty!!!! Makes my day!!

The excerpt was great, and I enjoyed the interview.