The Mystery of Man-Love 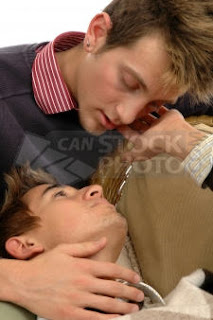 It is common knowledge that M/M romance sells well with female readers. Some romance enthusiasts won't read anything but male/male titles. When I first became aware of this phenomenon, I found it quite puzzling.

A few months ago, to try and unravel this mystery, I ran a “M/M romance” contest. I asked participants to email me, telling me whether they enjoyed homorerotic romance, and if so, why. I gave away a book to a randomly selected entrant.

The responses that I received were enlightening. One person said that she'd never read an M/M romance, though she was open to doing so. Every single other message offered enthusiastic approval for the sub-genre.

I love m/m romance. I think it's the thrill of the unknown for one thing, and the fun of exploring men's feelings and thoughts. Of course it doesn't hurt that I have a great appreciation of the male body--LOL.

I think it's really sexy to "see" two men in sexual acts. The sex is usually more intense and raw. It has a vaguely voyeuristic quality which is quite exciting. In heterosexual romances, which I also enjoy, the story is usually told from the woman's perspective, with the man's feelings/thoughts coming in second. In contrast, MM romances give a unique perspective to how men are in relationships.

I have to say that I do enjoy reading m/m romances, probably because I think that the self actualization & realization of their sexuality is a journey worth witnessing. I appreciate the way passion and love is written from a male perspective, where it is both soft and tough at the same time. I love the aggression and the gentleness, the contrasts constantly present; I hope that makes sense to you.

Then there was this endorsement:

I love M/M romance. I started reading it about 3 years ago and have been hooked every since. It has added new insight to my sex life!

So a major draw in M/M romance seems to be the voyeuristic and transgressive nature of M/M love. Women enjoy imagining scenes that they might not be likely to see in real life, namely two men in a sexual situation. I find it fascinating that romance readers seem to be so visually oriented. This seems to violate the common wisdom that men are aroused by things they see, women by what they feel.

On the other hand, feelings are also tremendously important to these readers. Many participants commented that they enjoyed both M/F and M/M romances because love is fundamentally the same regardless of gender.

It is also nice in m/m books, that you get to see the softer side of men in love.

I find the m/m romances are beautiful, they are a love between two that they could have been m/f or f/f, it totally doesn't matter. I read one recently and cried, it was just so emotional a read as well as sizzling.

My informants made it clear that they were not interested merely in M/M sex, but in how the protagonists in a M/M story relate to one another, and to society.

The irony is that most M/M romance is actually written by women. It's not clear that the vision of homoreotic love or male emotion that they portray is particularly accurate. They offer a woman's perspective on gay love – a perspective that appears to be very popular with other women.

I have read a certain amount of gay male erotica. Although you do find romantic, emotionally-charged stories, many tales in this genre celebrate anonymous sex for its own sake, and depict M/M relationships as rough, even cruel.

What is the truth? I don't think that's a meaningful question. In fiction, the author articulates his or her vision of the characters and their journey. One author's perspective is neither more nor less valid than another's.

Women romance readers clearly enjoy reading about sensual, caring relationships between two men. I doubt that it really matters whether these stories are “realistic”, as long as they are believable. And from my experience, emotional authenticity is a more important determinant of what a reader will believe than objective fact.

If I were concerned only with my royalties, I'd probably stop writing anything except M/M work. I really try and resist the temptation to write what's popular at the moment. When I do, I risk strangling my muse. However, to be honest, I think that Necessary Madness offers readers what they are seeking in this genre, a mixture of gentleness and toughness. The following (X-rated) excerpt will give you a sample of what I mean.

Rob leant forward, brushing his lips against Kyle’s. Kyle moaned into his mouth as Rob thrust again, filling him further. Rob laid his hand on Kyle’s chest. He felt the boy’s heartbeat, strong and fast. “One more push,” he murmured in Kyle’s ear. “Can you take it?”

Rob arched his back and drove his cock in up to the balls. Kyle yelled, but when Rob tried to pull out, Kyle arched up, trying to jam him in deeper. “Fuck me,” Kyle groaned. “Don’t hold back. Fuck me hard.”

The words cut Rob loose, breaking the last threads of his control. He pulled back then rammed into Kyle with all his strength, once, twice, again, while Kyle screamed and ground his buttocks against Rob’s groin. Rob grabbed Kyle’s thighs to support himself as he pistoned his cock in and out.

He’d never had a fuck like this, so tight, so smooth, so purely sensual. He’d worried whether Kyle could take his whole bulk, but Kyle’s asshole enclosed him like a velvet glove, a perfect fit. He bucked and moaned, piercing Kyle again and again, tension building in his balls as wave after wave of pleasure broke over him. He stopped worrying about whether he was hurting his partner. The gleaming dark eyes, locked on his own, told him that he was not.

Rob lay on Kyle’s chest for a moment, catching his breath. Then he rolled over to relieve the weight, stretching out beside his companion’s slender frame. He closed his eyes, a bit weary. He’d had more sex in the last twenty-four hours than in the previous two months.

He was roused by Kyle’s silky lips pressing against his own. “Thank you, Rob.” His voice was soft, almost reverent. “It was just like I dreamt.”

He opened his eyes to find Kyle hovering over him, radiating happiness and contentment. “It didn’t hurt too much?”

“Not too much. Just enough.” Rob felt something bounce against his stomach. Looking down, he was astounded to see that the younger man was hard again. “I’m so grateful.”

Kyle gave him a lascivious grin, and stared pointedly at Rob’s cock. Damn if it wasn’t half-erect! “But…”

“Not tonight. No more sex.”

“Can I sleep with you, at least?” Kyle snuggled down next to him, not waiting for an answer. A strange lump rose in Rob’s throat as the youth’s limbs tangled themselves with his own.

“Yeah, okay.” Rob smoothed Kyle’s hair out of his eyes. “I’d like that.” Peace settled over him like a warm, fuzzy blanket. “I’d like that very much.”

ANNOUNCEMENT: Would "H" who commented on my post on 25 December (Interview with Rob Murphy) and "She" who commented on Erastes' post yesterday, please email me with your names and postal addresses? You're my winners for those days!

I loved your post. I am so addicted to reading m/m romances...There's just such beautiful tension between the characters. I love the rawness of the emotions and the fierce sexuality that's present in each story.

I Prefer M/F But I'm just been Getting in to some of the M/M Book.Great Excerpt
Happy New Years
sasluvbooks(at)yahoo.com

I really enjoy reading M/M stories but I mainly read M/F stories because I mainly read in Paper or hardback not ebooks and my bookstore doesn't carry very many M/M books. I'm beginning to read more ebooks though and I plan to buy more M/M ebooks.

I read M/M stories. They are not my favorite, but I enjoy reading all the romance genres. I would rather M/F stories!!

Some internet acquaintances was talking about an m/m novel so much, I ended up buying it... and I haven't looked back since! That one book has opened a whole new genre for me.