When I was a kid, one of our family holiday rituals was watching the cartoon version of A Christmas Carol with Mr. Magoo as Scrooge.

This was actually long before I read the original Dickens. I was only eight or nine, but the story made a big impression on me. Even at that age, I understood how powerful visions of the future could be in changing someone’s path.

In the Mr. Magoo holiday special, the Ghost of Christmas Future is a silent, cowled figure who shows Scrooge the ultimate outcome of his miserly, selfish existence: a tragic, much-mourned death for poor Tiny Tim and a lonely, empty demise for himself. I remember the surge of joy when Scrooge realizes that he still has time to change himself, and hence his destiny (and that of Tiny Tim).

Years and years later, I channeled some of those emotions into an erotic romance loosely based on the Dickens classic. My hero Michael is no miser, but he’s been holding back on his lover Neil, hiding his desire to submit and his frustration with the vanilla nature of their relationship. The ghost of Christmas future appears in the form of Thorne Wilder, who claims he’s the Dom Michael craves. Thorne shows Michael thrilling scenes from a wild life of sexual excess that he claims they'll share if he breaks up with Neil. Like Scrooge’s guide to the future, though, Thorne reveals some dark visions. Michael must decide whether he should trust the ghost of Christmas future, or whether his true future lies with Neil. 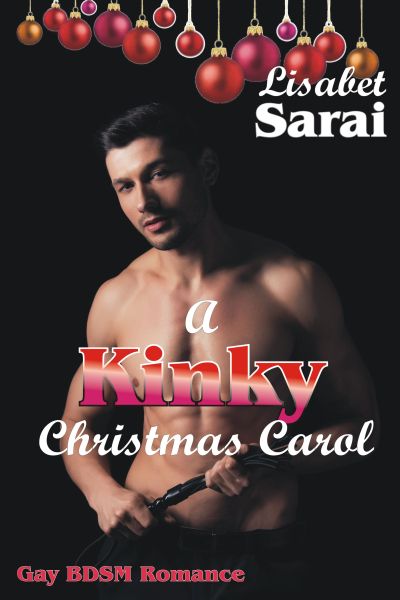 I woke with a start, not knowing why. Neil had rolled over; he lay on his side of the bed with his back to me. All at once I felt terribly alone.

Golden light filtered up the hallway from the living room. I shook my head, trying to clear the fog. Had we forgotten to turn off the Christmas tree? But no, I remembered flipping the switch before we left for the party. Neil was always concerned about the danger of fire.

What was it then? Something out on the street in front of the building, an emergency vehicle or something? Those lights would be red, wouldn’t they?

Trying not to wake Neil, I crawled out of bed and tiptoed barefoot down the hall. The closer I got to the living room, the brighter the light became.

The tree was in fact lit, the multicolored bulbs twinkling in a spiral pattern. Someone had kindled the candles on the mantle, as well. However, these were not the source of the golden glow.

A young man lay sprawled on the sofa – an exceptionally handsome man. His flawless skin was bronzed as if he spent most of his time in the sun. His ragged, honey-colored hair hung down over one eye. He had high cheekbones, a prominent nose, ripe lips with a slightly cruel cast. Despite his fair hair, his eyebrows were dark. They arched gracefully over eyes that held me transfixed – brilliant, wise, all-seeing eyes.

The man wore leather, so supple and tight that it showed every well-sculpted muscle of his powerful body.

This exotic stranger was emitting the strange illumination. The light surrounded him like a halo. When he moved, it ebbed and flowed as though it were alive.

I must be dreaming, I concluded. But who would have believed that I could dream up such a gorgeous guy?

“Good evening, Michael.” His voice was like honey, too, sweet and smooth flowing. It made my mouth water. I realized that I was naked and half-erect. I didn’t care. Wonder and arousal overwhelmed me.

The stranger swung his long legs off the couch and stood up. The light shimmered around him. My eyes were drawn to the bulge at his groin.

A stab of guilt shredded my sense of well-being. “Uh – I have a lover. He’s asleep in the other room.”

“My future lover?” I felt stupid, parroting him, but I didn’t know what to say.

“I’ve come from the future, to give you a glimpse of your life with me. To help you decide.”

This time I knew what he meant. He was talking about leaving Neil. This was just a guilt dream, based on my musings before I fell asleep.

Sound interesting? The book’s available at all your favorite stores!

Posted by Lisabet Sarai at 6:44 AM