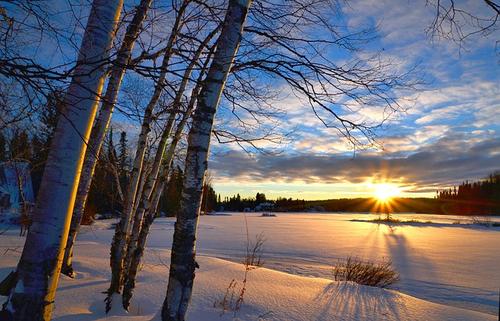 Image by Alain Audet from Pixabay

Today is the solstice, the first day of winter – a day of mystery and power. Pagan societies venerated the solstice, a time when the light is reborn in the world and within the human spirit. Christmas has co-opted the older festival, but the wonder remains undiluted.

In my latest novel The Journeyman’s Trial, the enigmatic Master Toymaker revives a solstice tradition practised by the original members of the Guild, before the tragic accident that killed his lovers and turned him into a scarred monster. He invites the new generation of young sexual artificers to join him in celebrating the longest night of the year.

Friday the twenty-first, the winter solstice, brought the first snow of the season, an inch or two that dusted the moors like confectioners’ sugar on a cake. Aside from the turn in the weather, it seemed like any other workday. The lab bustled as everyone concentrated on finishing their tasks. The Master did not appear, but Roderick strolled into the lab after lunch, as dashing and nonchalant as ever. He spent some time conferring with Rafe, possibly about the installation plans, then left again. No words passed between her and the duke, but he gave her a knowing smile as he passed her workbench, bold enough to make her blush.

He must have been teasing me about the so-called ritual, she thought. Everyone is focused on their assignments. However, when she returned to her room after supper, she discovered she’d been too quick to dismiss his hints.

Draped across her bed was a robe of pure white silk damask. The tight weave felt smooth and sensual under her fingertips. Beside the garment she found a folded square of parchment, sealed with red wax. She had no difficulty recognising the Master’s flowing penmanship.

“Please join our Celebration of the Solstice.

Her heart did a quick somersault in her chest. The Master obviously intended her to wear the luxurious robe to his celebration. Had the other Guild members received similar garments and invitations? Of course she’d attend, though she was tired enough that she’d been considering an early bedtime. She had to know the truth behind Roderick’s suggestive hints.

She’d never heard about any East Tower, though. The Master’s chambers were located in a tower in the western wing of the Gothic-style mansion. She supposed there might be a comparable turret at the other end.

An hour later, wearing slippers with the heavy robe swishing around her ankles, she made her way along the third storey corridor, walking in the opposite direction to the stair that led to the Master’s sanctum. She’d never explored this wing before. Although like every part of Randerley it was scrupulously clean, the place felt as though it had long been deserted. Out of curiosity, she tried several of the doors that lined the hallway. All were locked.

As she’d half-expected, the corridor terminated in a circular space that had to be the base of the tower, with a spiral staircase in the centre similar to the one that led up to the Master’s lair. As she climbed, she noticed an uneven layer of dust on the handrail. Before tonight, she guessed, no one had used this stair for some time.

She ascended two flights. The chamber into which she emerged had a layout that mirrored the Master’s quarters. Lofty windows offered a view of the snowy moors, silvered by a moon a few days past full. Like its twin, the room contained a bed against one wall, but this one was far larger and more ornate than the Master’s. Thick Oriental carpets covered the floor, rather like those in Desirée’s sitting room. Instead of the familiar bookshelves and work table in the Master’s suite, low chaises lined the other walls, upholstered in gleaming black brocade.

Some of her colleagues were already seated upon these, all wearing robes like her own. Jia’s midnight locks flowed loose over her white-clad shoulders, a startling contrast. Archie perched beside her, clutching her hand and looking simultaneously worried and excited. Lucy relaxed on another chaise, her robe gaping to reveal one delightfully rounded thigh. When their eyes met, the blonde gave her a saucy wink.

Indentations in the wall held candelabra that lit the scene with flickering gold but left pockets of soft shadow. It took a few moments for Gillian to notice the Master, who stood behind a circular table near the windows, flanked by Amelia on his right and Roderick on his left. All three were robed in white.

“Welcome, Gillian,” he intoned, his rich voice sending shivers up her spine. “Please be seated.”

She settled next to Lucy.

Her lover’s eyes gleamed with passion as he strode past to claim a place directly opposite her. His robe, carelessly closed, offered glimpses of his scimitar-scarred chest and black-furred thighs, glimpses that made Gillian ache with sudden need. Now she was sorry she hadn’t chosen an empty chaise so that he could have joined her.

The two late-comers seated themselves side by side, not far from Rafe.

“Now the entire Guild is assembled. Let us begin.”

Gillian leaned forward, betraying her eagerness, but in fact nothing happened for long moments. The Master swept his hidden gaze over the company. Despite his mask, she felt the moment when his attention settled upon her, felt it in the leaping of her pulse and the swelling of her nipples.

“Thank you for joining us tonight,” he said at last. “I’m sure you’re all curious about this celebration. Well, all of you except Amelia and Roderick, who helped me to establish the solstice tradition.”

Roderick’s lips twitched in a half-smile she felt sure was aimed at her.

“In the last month, you’ve worked closely together, each one of you dedicated to the success of our current venture. You’ve come to know one another well.”

She glanced over at Rafe to find him staring at her with raw hunger. The few yards between them felt like miles.

“Tonight I hope you will become closer still.” He gestured at the pitcher. “Tonight I invite you to share the winter wine. It will warm your bodies and gladden your souls. But let me be honest – it will change you. I swear you will come to no harm, but if you have any doubts, you may leave now. We shall not blame you.”

Archie spoke up. “Change us how, sir?” His voice held a slight quaver.

“The wine contains a drug that will open you to one another in new ways. After tonight, you will be bound more strongly to your fellow Guild members. You may find it difficult to leave.”

Get your copy of The Journeyman’s Trial and celebrate the longest night of the year.