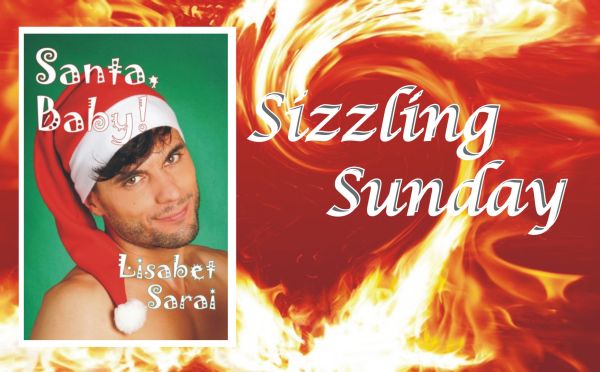 Outside it might be snowing – or at least chilly! – but here at Beyond Romance things are sizzling. I’ve got an exclusive excerpt today from my light-hearted holiday erotica tale Santa, Baby! I’ll bet this warms you up...

Matt Glaser may not have the Santa Claus beard or belly, but when it comes to earning extra holiday cash, he loves his red suit like a reindeer loves carrots. This potential client, though—classy, curvy Eleanor Danforth—seems more interested in checking out his butt than his references. And two grand for a private party? Oy vey, Prancer, something's not kosher about this particular Vixen.

“Henry? Sorry to interrupt, but this is Matt, our Santa for the evening.”

Mr. Danforth had graying hair, but otherwise seemed hale and hearty. Unlike his wife, he was dressed casually, in a polo shirt and khakis. The two men beside him were similarly attired. One appeared to be more or less Henry’s age, the other perhaps a decade younger. All had that neatly-groomed, glowing-with-health appearance that suggested they didn’t stint on gym memberships, hair care, manicures or massages.

The host chuckled and downed the rest of his Scotch. “I imagine he’ll keep you and your friends busy, my dear.” A half empty bottle of Chivas sat on the table, along with a silver ice bucket and tongs. He poured himself another drink then turned to his companions. “Jim? Arnie? You want a refill?”

They shook their heads. “Actually, I’d like to meet those elves your wife promised…” said the younger guy with a grin.

“Of course. They’re in the kitchen, preparing the eggnog. Matt, would you mind fetching them?” Eleanor gestured in the appropriate direction.

“No problem,” I said. My route took me past Jane and Delilah. Delilah blew me a kiss.

The swinging door was shut. “Hello?” I called as I pushed it open. “Is the eggnog ready?”

The kitchen was as big and luxurious as I would have expected, with a slate floor, sleek modern appliances, racks of expensive pots and pans and a marble-topped food preparation island. What I didn’t expect was the scene on top of the island.

A blonde woman about my own age sat on the counter, leaning back on her arms. Her fur-trimmed red cap and tinsel-trimmed brassiere suggested that she was one of Eleanor’s “elves”. She also wore an extremely short skirt that matched her hat. That minimalist garment was flipped back to expose her creamy thighs and her golden pussy fur.

A second blonde in a matching outfit perched on a low stool between the first girl’s legs. Both her hands were busily engaged with her companion’s snatch. With her left, she diddled her friend’s clit. She used her right to slide a fat cucumber in and out of the girl’s juicy hole.

I froze, fascinated by the lewd scene in front of me. My cock sprang to attention. I knew I should alert the women to my presence, but I couldn’t tear my eyes from the sight of the vegetable disappearing into that wet cavity. It was probably wider in diameter than my dick. Fascinated, I watched the splayed woman’s tissues stretch as the seated girl pushed the cucumber in further. My balls tensed as I imagined my cock in place of the cuke.

“Come for me, Betsy,” murmured the seated blonde. “Let me hear you scream.”

Still working the cucumber, she leaned closer to the wide-open pussy flesh and fastened her mouth on her partner’s clit.

Betsy released a strangled cry and convulsed in a wild climax, grinding her pussy against her friend’s face. The cucumber tumbled to the floor as the seated woman burrowed into Betsy’s snatch. She slurped and sucked—I could hear the wet sounds, halfway across the room—while Betsy’s movements grew increasingly frantic. Betsy sank her fingers into her tormenter’s hair, pulling hard and riding her lover’s mouth to a second orgasm.

The blonde on the counter collapsed backward. The woman on the stool rested her cheek against Betsy’s thigh, breathing almost as heavily. I suddenly realized I was stroking my rock-hard dick through the thin spandex. I snatched my hand away.

Betsy raised her head. She flashed me a grin.

“Oh! Hi! Didn’t realize there was anyone here… Gee, what a cute costume!”

I felt my cheeks redden under the beard. “Sorry, I didn’t mean to—um—interrupt…”

The woman who’d wielded the cucumber smiled. “Oh, you didn’t interrupt. I’m pretty sure the minx is finished, at least for now. Though if you want to have a go…”

Betsy slid off the counter and pulled her skirt down. Not that this helped much, since the costume hardly covered her naked ass. “It’s been ready for half an hour. Alison and I were just killing time.”

“So I see.” My dick was still painfully swollen, but after the show the girls had put on, that hardly seem to matter. “I’m Matt. Hired to play Santa. Though I’m not really sure what that’s going to entail.”

“It will probably entail some tail…” said Betsy with a giggle. “Sorry, I couldn’t resist.”

Both women were fair-haired and of medium height, but otherwise they had little in common physically. Alison was slender and willowy, with lovely long legs and palm-sized breasts. Betsy had a fuller figure, with lush tits, ample hips and delightfully rounded thighs.

Neither appeared to have much in the way of inhibitions. They seemed completely at ease in their revealing costumes.

“We’d better get out there, before Mrs. Danforth comes looking for us,” I suggested.

Alison picked the cucumber up from the floor, washed it off, opened one of the two refrigerators, and dumped it in the vegetable bin. My expression of horror must have been evident even with the beard, because Betsy chuckled.

“A little pussy juice never hurt anyone,” she said. “I’ll take this, Al.” She picked up a tray holding a crystal pitcher full of golden liquid and matching crystal cups. “Can you get the other? Matt, be a sweetheart and get the door, won’t you?”

I held the door open while the two elves marched out. They wore high-heeled black boots that made their bottoms sway enticingly. The bulge in my groin made it hard to walk.

“A little pussy juice never hurt anyone,” - I love it and agree fully Lisabet.

You do these steamy "rec-sex" scenes so well! (Recreational). I wish more people were this uninhibited--can't be planning wars/riots, etc, while pursuing so many orgasms. It would make for a more peaceful world! Merry Christmas, everyone, and orgasms all around!