The Bimbo, the Witch and the Warrior: Splendificent XXX-MAS 2 by Dacy Alex – #Erotica #Humor #Christmas 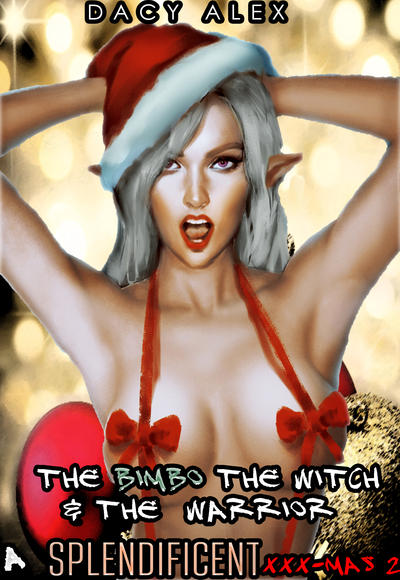 This Christmas it’s an all-out, elf-on-elf war, with a gullible but delectable elven princess as the ultimate prize!

Way up in the North Pole, Santa Claus knows he’s the Man. After all, what's Christmas without Santa and his helpers? But his "little dudes" aren't the only elves on the planet. A Scandinavian family of royal
elves rules Golden Land, and these exquisite creatures are stealing all Santa's press.

The lascivious, leggy Princess Tristabelle Elvrina is the most popular of these pointy-eared dignitaries. "Slippery when wet" signs line her path due to her countless drooling followers.

Santa's not about to put up with competition, especially from a ditzy blonde whose skimpy little outfits barely contain her considerable charms. He orders his little dudes to capture and conquer Tristabelle,
to humble the haughty royal and pour some frosting on her Christmas cookies.

The other Elvrinas barely tolerate one another, but with their youngest sister kidnapped, they must come together to rescue her toned butt. Easier said than done when the team includes Maggie, an incompetent,
prank-playing witch; Astrid, a ball-busting but sexually susceptible warrior princess; Rodgir, an adulterous rouge; and Gorick, an arrogant psychopath who considers himself the most dangerous creature on earth.

Will the Elvrina siblings put aside their made-for-reality show bickering to save their sister from becoming Santa's sex slave? Are the littlest guys in the world packing the biggest? Will Tristabelle freeze
her tush off in her barely-there bikini? And how does Santa fit all those presents in that tiny sleigh?

Come spend your holidays in the outrageous world of the Splendificent tales and find out!

Golden Land’s population consisted primarily of elves, few of whom claimed to be Christians. That didn’t stop the witches, werewolves, vampires and sorcerers from lavishing Princess Tristabelle with Christmas presents every year. Astrid had just toppled over a stuffed polar bear before deciding it was time to find baby sister and make her organize her jumbled array of toys, trinkets, and magical artifacts.

Before Princess Tristabelle could further protest about cleaning, a stout, long-serving werewolf eunuch servant from Iceland approached the princesses.

“Forgive the interruption, Your Highnesses, but this Christmas letter was just delivered for you, Princess Tristabelle.”

A werewolf eunuch was just one of the many curiosities in Hildegarde Palace. While most male werewolves hosted great pride in their members this man voluntarily disposed of his. Alas, it was the only way for him to tolerate so much sculpted Elvrina girl ass.

So impressed was King Fenrisson he bronzed the werewolf’s cock and presented it to him on a full moon.

“How delightful!” the golden-haired princess exclaimed as she took the letter in her dainty fingers.

“I understand the joy of Christmas, but give me our Norse holidays where Rodgir throws a wench on the table and gives…uh…a genuine lesson on the kindness of The Wind Gods! Such powerful thrusts…I mean gusts! Gusts!” Astrid commented. “Additionally, our songs are far more entertaining.”

Ignoring her sister, Princess Tristabelle read the message. “Dearest, Tristabelle! Please join us in Solstice Woods so we may bestow upon you a MASSIVE present that is far too, too, too, TOOOOOOOOOOOOO big to deliver to Hildegarde Palace! Signed, your secret admirers. “

“Ugh, the tricks are so uncreative today. Who wrote that tripe?” Princess Astrid shook her head in exasperation. “They think rather lowly of your intellect if they believe you would honestly take such weak bait.”

Unfortunately, upon further thought, Astrid realized the self-styled secret admirers probably had an accurate view of Tristabelle’s intellect.. There were guppies in the sea harder to reel in than her gullible sister. She preemptively rolled her purple eyes, knowing full her well her sister was about to say…

“A big present? How glorious!”