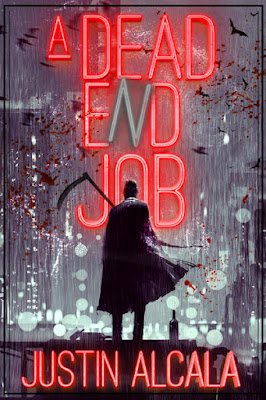 Death needs a vacation. Every day the stress gets worse. For some reason, people are dying – people who aren’t on Death’s schedule. Despite his having the most sophisticated IT facilities possible for tracking the fate of humanity, mortals are slipping through the cracks. At the same time, he has to deal with the non-mortals, a disgusting assortment of undead or reanimated individuals who seem determined to make his existence a living hell.

But who’s going to shuffle folks out of the mortal coil if Death takes off for Palm Beach or Acapulco?

Buck Palasinski is a nice guy, even if he is a professional hit man. He’s a decorated veteran. He returns his library books. He acts as wizard for his motley crew of role-play gaming fanatics. Careful but fatalistic, he figures his current occupation is the natural result of his poverty-stricken, abuse-filled childhood, and he knows it’s only a matter of time before one of his hits goes wrong.

When in fact he does take a bullet in the head in the process of fulfilling a contract, Death revives him and lays out an offer. Buck has a chance to escape the eternal punishment he’s earned through his chosen occupation, by serving as Death’s intern while the Grim Reaper is on holiday.

Conscientious to a fault, Buck tries to fulfill Death’s orders, only to discover that the situation is far more complicated than he’s been led to believe. He’s smack in the middle of a war whose foot soldiers include vampires, zombies, doppelgangers, Mexican brujas, ancient Celtic spirits, reanimated voodoo priests and Frankenstein’s original monster. He doesn’t know who to trust, but when fate throws a werewolf girl-child into his arms, his priorities become crystal clear: protect Luna at all costs.

When I read the premise of this urban fantasy (while setting up a blog post as part of the author’s book tour), I laughed out loud – and asked for a review copy. Originality and decent prose are the two top characteristics I look for in my personal reading. A Dead End Job definitely offers both.

Buck is a lovable character, as smart and brave as he is broke and desperate, morally compromised but with a heart of gold. There’s constant action, occasionally confusing, perhaps reflecting the hero’s own confusion. Set in Chicago, the novel has a strong sense of place, mostly grimy and derelict. Several of the scenes play out in the cavernous, multi-leveled construction pit of an abandoned skyscraper project, a great setting for supernatural battles.

All in all, A Dead End Job is great fun, creative and entertaining. While wild and quite crazy, it doesn’t insult your intelligence. Indeed, it has a charmingly nerdish quality. I think I probably missed some inside jokes that gamers might understand, but I still found myself chuckling frequently – when I wasn’t holding my breath watching Buck fight off the forces of darkness.

Damn! My TBR list gets longer every time you review something I never heard of! Thanks for expanding my reading tastes, since I always enjoy the books you recommend.