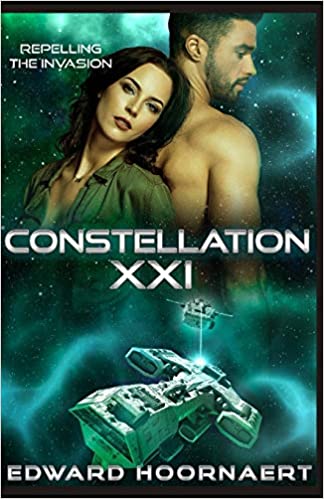 Sienna Dukelsky graduated at the top of her class from the Keening AstroSpace Academy. Yet for her first job, she has selected a mundane position as captain of a space tug, towing ships emerging from hyperspace to safe berths at Farflung Station. Still, her brand- new tugship offers the latest thought-controlled technology, and she’s eager to prove her mastery of her new responsibilities, especially to the sarcastic marine sergeant Scheherazade Vallant who has been assigned to supervise her maiden voyage.

To her surprise and dismay, the first customer for her services is the Constellation XXI, an aging space freighter captained by her former fellow student – and lover – Crispin Hunt. Crispin was expelled from the Academy, ostensibly for cheating, and forced into a career far less promising than the one for which he’d been groomed. He’s still the handsome, devil-may-care charmer she remembers, and he clearly still wants Sienna. She feels the old attraction, too, but she knows he’d drop her in an instant if he knew the truth about his expulsion.

When Sienna’s tugship inexplicably goes dead, losing power and all functionality, the Constellation XXI is left hurtling uncontrolled toward the space station. In a matter of hours, Farflung will be forced to vaporize the ship with tactical nukes to prevent a collision that would exterminate the entire population of the orbiting outpost. This sort of emergency is not something covered by the procedures Sienna knows so well, but she’s determined to save Farflung, the Constellation XXI and its secret cargo, even if she dies in the attempt.

Constellation XXI is the third book in Ed Hoornaert’s Repelling the Invasion series, and is just as enjoyable as the two previous installments. Mr. Hoornaert’s sci fi romances do follow something of a formula – a feisty and capable but insecure heroine, a love object with whom she initially has a prickly relationship, and a near-hopeless situation which can only be resolved through exceptional courage and ingenuity. The details and the characters vary enough, however, that each book is a new adventure. This book offers a few surprises, most notably in the nature of the Constellation’s cargo, and a tremendously suspenseful climax as the seconds count down to a desperate, possibly fatal conclusion.

Mr. Hoornaert does a great job describing the environment of the two ships, which are very different. The tug is small and modern, the freighter battered but roomy. In one of my favorite scenes, Sienna travels back through the flexible air-bridge connecting the freighter to the tug, to make one last attempt at resuscitating her lifeless ship. Without power, the temperature has dropped to lethal levels. Sienna’s lungs barely work and her skin freezes to the surface of the air-bridge, yet she pushes forward anyway, a true heroine. Incredibly vivid – it left me shivering!

Since this is a romance, you know there will be a happy ending. I don’t think I’m spoiling things by letting you know that Sienna does save the day, and of course reunites with her true love. The final scene struck me as a bit contrived, but after you’ve described a near-miss between a massive space craft and a fragile space station, I imagine it’s tough to bring things to a close. I also raised my eyebrows a bit as Sienna interweaves her confession to Crispin with her last ditch efforts to squeak the freighter past Farflung. I would have thought that wasn’t exactly the best timing. On the other hand, the plot does require that Sienna come clean about her role in Crispin’s expulsion. I guess it’s hard to find an opportunity for emotional stuff when you’re wrangling two space ships!

I should mention that supporting character Sergeant Vallant is an absolute delight. Crusty, crafty, battle-worn women are another of the author’s specialities (for instance, Duchess Opsie in the Alien Contact for Idiots series), and he really does them well.

If you like light-hearted, deftly written space opera romance, you can always rely on Ed Hoornaert to deliver the goods. Grab a copy of Constellation XXI and escape to a universe where women are brave and smart as well as sexy, and men appreciate that.