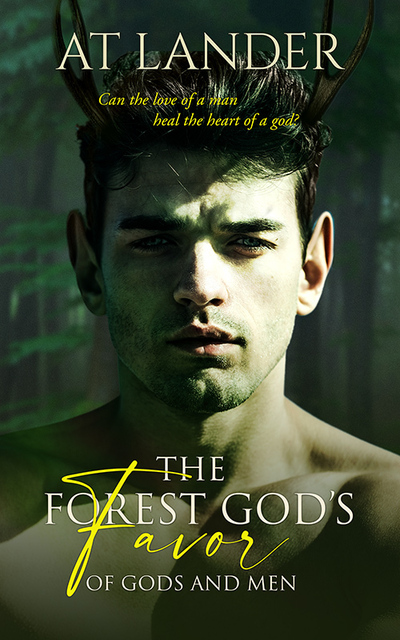 The Forest God’s Favor by AT Lander

Greek farmer Cleon, his family and the rest of his rural village are facing famine. Their crops won’t sprout. Their chickens won’t lay eggs. Fruit withers on the vine. Obviously Lord Dryas, the forest god responsible for fertility, must be angry. Not that this would be unusual. Dryas is potent but ill-tempered, greedy for worship and brutal in taking the villager’s offerings – the cream of their young men and women.

Still, Cleon knows that Dryas must be placated, and he is by far the best suited to serve as a sacrifice. Although he’s quite old to slake Dryas’ hunger for succulent teen-aged flesh, he is unmarried and has ample experience loving men, which he hopes will make the god’s violation less punishing.

When he presents himself at the forest shrine, however, he finds no trace of the towering, antlered form he so dreads. It appears that Dryas has abandoned his responsibilities to his younger brother Anthos, a slender, shy creature who has been raised to believe he’s useless. In particular, Anthos has no idea how to kindle new life in the fields and the forests, because he has never experienced sexual communion and knows nothing of its life-giving magic. A virginal fertility god is something of an oxymoron.

AT Lander made me believe in Anthos, as well as love him. He has a fundamental sweetness, even in the midst of the filthiest coupling. I cheered at his gradual transformation from an insecure fawn to a confident stag. The whole tale is utterly delicious.

I particularly commend the author for allowing Anthos and Cleon to engage in sexual activities with other people. Few romance authors have the courage to brave the opinions of straight-laced readers who will complain about the characters’ “cheating”. In this story, external dalliances do not threaten their bond, but rather make it stronger. I also loved the gleeful bisexuality of the god. Of course a fertility deity must embrace both feminine and the masculine energies in order to keep the earth in balance.

Traditional romance readers may not like this book. They may decide it breaks too many rules. In my opinion, though, this exquisite romance was pretty close to perfect.