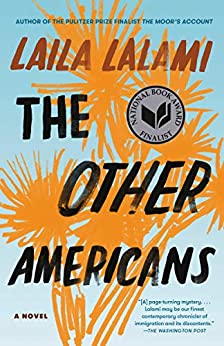 The Other Americans by Laila Lalami

Nora Guerraoui thought she’d left her hometown in the Mojave Desert for good. A talented but as yet unknown jazz composer, single in her thirties and working as a teacher to make ends meet, she knows she’ll never satisfy her mother Maryam – never live up to the example of her sister Salma, with her marriage, kids and respectable profession as a dentist. When Nora’s father Driss is killed by a hit-and-run driver right outside his restaurant, however, she can’t dodge her family responsibilities, even if it means revisiting painful memories. Her mother is convinced the death was no accident, and as Nora investigates, she tends to agree. With no witnesses, though, the police have little to go on.

Jeremy Gorecki has been haunted by darkness since he returned from his deployment in Iraq. His physical scars are nothing compared to the psychic damage. Cursed with insomnia, he exercises compulsively, studies for the degree he never managed to finish, and works for the sheriff’s office. He and Nora were schoolmates, both shy and bullied, both musical. Meeting as adults, they find common ground in their shared history as well as their grief. Gradually their childhood friendship grows into something deeper and more intense.

Efraín Mendez was riding his bike past Driss’s diner when the big car slammed into the old man, then raced away, but as an illegal immigrant he’s terrified of going to the authorities. His wife keeps nagging him to do the right thing, though, and he starts to feel haunted by the ghost of the murder victim.

A black woman, Detective Coleman knows she has to be twice as good at her job as a white man to get the same recognition. Her intuition tells her that Driss Guerraoui was targeted deliberately, perhaps for being a successful businessman despite his immigrant roots. But how can she prove it?

From the descriptions above, you might think that The Other Americans was a mystery. Or, focusing on Nora’s and Jeremy’s relationship, you might consider it to be a romance. The inter-generational conflicts might lead you to believe the book was a family drama. In fact, the novel is all of these and more. Above all, The Other Americans explores the experience of being an immigrant – of always being seen as “other” and “alien” no matter how long you’ve lived in the country or how deeply you’re embedded in your community. Nora, Driss, Maryam, Efraín, Coleman, even the seemingly perfect Salma, are all “other”. Indeed, Jeremy is an outcast as well, despite having been born and raised in the United States. His stint in the killing fields of the Gulf War is a chasm his neighbors aren’t willing to cross.

Laila Lalani gives voices to all these people. Each chapter is an intimate, first person narration by one of these characters. They reveal their history, their feelings, in some cases their secrets. And as we read each chapter – including chapters told from the perspective of Driss’s killer – we come to understand each person a bit more and to judge a bit less.

The Other Americans is an emotional roller coaster, a dozen entwined stories narrated in elegant, evocative prose. The book was a finalist for the National Book Award, a nomination well-deserved. It takes great skill to balance so many different views of reality and to seamlessly weave together the threads of multiple genres. The theme of being “other” does not overwhelm the plot, but it never fades into the background, either.

There’s a lot of emotional pain exposed in this novel. Rest assured, however, that you’ll find joy and healing as well. This isn’t an easy book to read – but it is well worth the effort.