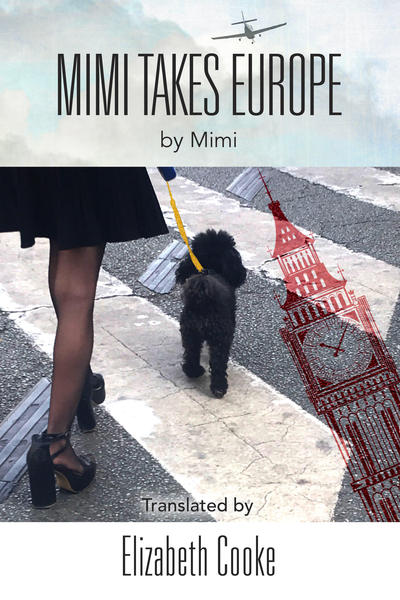 In this latest cozy mystery, Mimi, and her co-anchor, Nicole Marcel, on the Interview TV Show, TONIGHT, is at her peak of popularity in Paris. Charles Bleisante, who owns the TV Station, proposes a TV Interview tour for the pair of certain cities on the continent.

The two, with Nicole’s lover, Detective Giscard Morency, are off, first to Barcelona, later to London. The Interviews center on food: the cooking of a paella, in Spain; the braising of a Christmas goose in London, delicious episodes that attract a wide audience. However, certain nefarious incidents occur, in which Mimi is canine sleuth.

CNN–New York requests the co-anchors come to Manhattan for more interviews. There, Mimi helps solve a grisly murder that takes place in one of the highest billionaire luxury buildings in the world.

The resolution of this crime is revealed in Book Five of The Mimi Series: MIMI TAKES MANHATTAN.

As media mogul and chairman of CNN, Victor Crofton had fallen in love with Mimi.

The combination of Mimi’s reaction to the Christmas goose livers – zoomed in on, by the CNN camera, as she lapped them up with obvious relish – and her breaking Karl’s case – his thefts and robberies – and the very look of her dog-grin with seven little teeth -- had him hooked!

Well, the chairman of the board of directors of CNN was entranced.

Victor Crofton. He lived in a posh apartment in Manhattan. He was also one of the original founders, along with Ted Turner, of the CNN network. He determined that Mimi should be brought to New York City for an Interview (or two or three) – which would raise her stardom – and that of CNN’s – to the stratosphere. Of course, Nicole’s beauty, as co-anchor, was an additional bonus.

Mimi would become more renowned than ever.

Elizabeth Cooke will be awarding a $25 Amazon or B/N GC to a randomly drawn winner via rafflecopter during the tour.

Welcome back to Beyond Romance, Elizabeth -- and Mimi, of course!