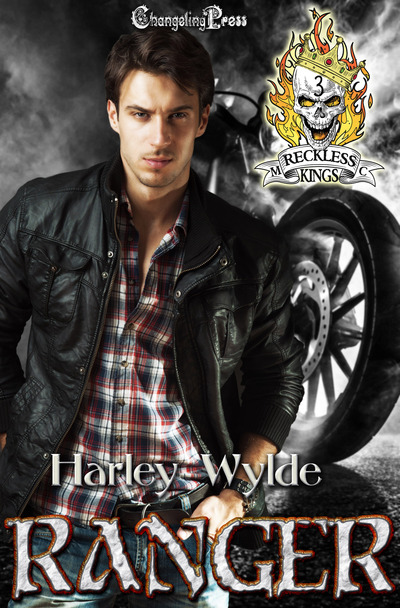 Danica -- I followed in my dad’s footsteps, chasing the rodeo. It’s been my life, other than friends and family with the Dixie Reapers. Until now, no one’s really noticed me. I’ve barely dated, and at twenty-three, I’m still a virgin. Then he walks in. Ranger. A Reckless King, and so far out of my league. But one kiss, and I know I’ll remember him forever… even after he walks away.

I didn’t think we had a future. Thought he’d forget I exist. But I was wrong. He wants me, every bit as much as I want him.

Ranger -- I saw her ride in a rodeo a year ago, and she held me spellbound. Running into her again at the Dixie Reapers, I’m not sure I can keep my hands to myself. She’s Cowboy’s daughter, and I should keep my distance. Too bad I’ve never been all that great at following the rules.

Only one thing is standing in my way. There’s someone stalking her. A man who thinks she’s his. He’s wrong. Danica will be mine, one way or another. Anyone who stands in the way will wish they’d never heard of me.

WARNING: Ranger is recommended for adult readers. It has coarse language, adult situations, and discusses events, like stalking and assault, that may trigger some readers. There is no cheating, a guaranteed happily-ever-after, and no cliffhanger!

Add to Goodreads or BookBub

“An exquisitely captivating, sweet, endearing and thrilling ride to go on…This story had so many great scenes that made me tear up, laugh, swoon, fan myself, and gasp.” – BookBub Review by DreaFernandez

“Oh Ranger!!! I absolutely loved Ranger and Danica!! … by far one of my favorites!” – BookBub Review by TeamlittleMama

“Ranger and Danica are absolutely amazing together!” – BookBub Review, lstaffey

“Ranger is a yummy little age gap read and positively perfect… This is a really great read.” – BookBub Review by Gpowe

“Why did I let you talk me into this?” I asked.

Scott grinned. “You’ll like it. First time a bull stomps some poor cowboy, you’ll be just as into it as the rest of the crowd.”

“Your idea of entertainment is fucked up.”

He ignored me and led us farther through the crowd. We ended up on bleachers halfway up, which gave us a decent view of the arena. I should have told him to fuck off and gone to a bar. Instead, I’d let him talk me into going to a rodeo. In my cut and motorcycle boots, I stuck out like a sore thumb. Scott had on his cowboy boots and a cowboy hat, which made sense seeing as how he worked on a horse farm outside Atlanta. My cowboy days were over. Long over.

“We just have to make it through the bronc riders and barrel racers before the bulls come out,” Scott said. “Some of the barrel racers are good eye candy, though. A few of them compete all over the country.”

Why did it not surprise me he’d be checking out the women, even the ones in the rodeo? The ladies had always loved Scott. Back when I’d served with him in the Army, I’d seen him walk out of a bar with two or three women hanging off him. I’d been leery of being with random women, unless I used a condom I’d brought with me. Even then, nothing was foolproof.

“Next up is Danica Adler on Windstorm,” the announcer said.

“Oh, this will be good.” Scott rubbed his hands on his thighs. “She’s one of the favorites.”

“Her dad is a champion rodeo rider. Last I heard, he was like you… a biker. They live down someplace in Alabama. Both his kids are following in his footsteps. Danica runs barrels and his son rides bulls. They’re both damn good too.”

I focused on the arena when a horse shot out of the gate. The slim rider on his back clung to him as he raced around the barrels. I couldn’t see much of her, except long honey-colored hair and curves that made my mouth water. When she finished her run, the announcer whooped with excitement.

“She did good?” I asked Scott. I might have lived around horses most of my life, but I’d never really cared about going to a rodeo. I damn sure hadn’t had a reason to watch anyone run barrels.

“Hell yeah! I bet she wins tonight.” He smiled and nudged me with his shoulder. “Told you this would be fun.”

Beast had sent me to Atlanta for a drop-off, so I’d thought I’d hang at a bar tonight before heading home. Nope. I’d decided to look up my old buddy Scott, and he’d nixed that idea almost immediately, so here I was at a rodeo. A rodeo. Although, I had to admit, watching Danica had been pretty exciting, even if it had ended quickly.

I spotted Danica making her way through the crowd. The smile on her face made my heart slam against my ribs. Fuck but she was pretty. Not gorgeous, but a sweet girl-next-door type. She just happened to be exactly the sort of woman I went for. Knowing she was a biker’s daughter, and from Alabama, made me think she was most likely Cowboy’s daughter and therefore the property of the Dixie Reapers. Which meant she was hands-off. Didn’t stop me from wanting her.

One night of fun was one thing, but forever? I knew if I put my hands on her, one of two things would happen. Either her daddy would demand I claim her, or he’d make sure no one ever found my body. Hell, he’d probably string me up for even looking at her the way I was right now. If he was like the others, and like Beast, then I had no doubt he was overprotective of his daughter.

Scott jammed his elbow into my ribs. “Don’t stare too hard. You know damn well her dad would have your balls.”

Right. I scanned the crowd, wondering if there might be a willing woman, and soon realized they were all about the cowboys and boots and wouldn’t want a damn thing to do with a biker. I may have grown up on a horse farm in Middle Tennessee, but those days were a thing of the past. I hadn’t been on a horse in years and didn’t plan to start now. Why the fuck did I let Scott talk me into shit like this? It wasn’t the first time I’d listened to him instead of doing what I’d originally planned, and it always came back to bite me in the ass in one way or another.

“Oh, please. You may not be able to touch, but you can’t tell me Danica won’t be in your spank bank for a long while. The girl has legs for days, even if she is on the petite side. I’m not blind. I can appreciate all she has to offer. Doesn’t mean I’m stupid enough to try and go there.”

“I had plans for tonight. None of which included going to bed alone, so thanks for nothing.”

Scott sighed. “We’ll hit up a bar on the way back to the motel. You can find some easy pussy.”

He shrugged and looked off in the direction Danica had just disappeared. I narrowed my eyes at him and had the sudden urge to beat the shit out of Scott. Did he have a thing for the Reaper’s daughter? I hadn’t even spoken to her, and yet part of me wanted to blind any fucker who dared look her way. Scott included. What the fuck was wrong with me?

I definitely needed to get laid and put Danica out of my mind. No fucking way I’d ever be able to go there. Scott was right about one thing, though. She’d be starring in my fantasies for a long while. 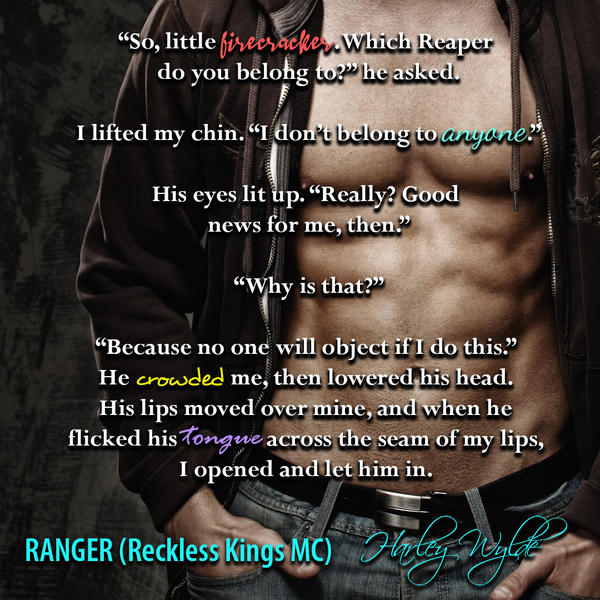 When Harley's writing, her motto is the hotter the better -- off the charts sex, commanding men, and the women who can't deny them. If you want men who talk dirty, are sexy as hell, and take what they want, then you've come to the right place. She doesn't shy away from the dangers and nastiness in the world, bringing those realities to the pages of her books, but always gives her characters a happily-ever-after and makes sure the bad guys get what they deserve.

The times Harley isn't writing, she's thinking up naughty things to do to her husband, drinking copious amounts of Starbucks, and reading. She loves to read and devours a book a day, sometimes more. She's also fond of TV shows and movies from the 1980's, as well as paranormal shows from the 1990's to today, even though she'd much rather be reading or writing.

You can find out more about Harley or enter her monthly giveaway on her website. Be sure to join her newsletter while you're there to learn more about discounts, signing events, and other goodies!

"Her characters are phenomenal and have a lot of depth to them. She is absolutely fantastic at writing an engaging sexy story. Harley Wylde keeps the words flowing so that you have to turn the page to see what happens next."

Welcome back to Beyond Romance. This sounds great (and clearly your reviewers agree!)