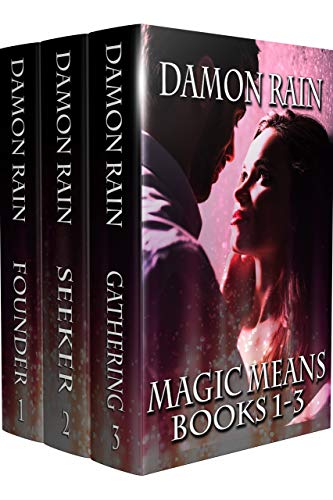 Imagine a world where magic is real – but not absolute. There’s a constant struggle between the Light and Dark forces, humans who have or want power, not to mention other myths and monsters, who are just as real. Succubi and incubi. Demons. Elves. Fairies.

Imagine that sex provides an important way of channeling power, a surge of energy that can heal or connect – or enslave.

This is the world of Damon Rain’s Magic Means series.

I grabbed this three-volume boxed set when it was on sale, partly because I was curious and partly because I personally do believe that sex is magic. I’d never heard of the author before, but he seems to have a loyal following, based on the reviews and the ranking of this book. It took me a long time to read – it’s over 800 pages – partly because I couldn’t take in too much at one time, or I’d get confused. There are many different characters, and it’s a little difficult to keep track of their relationships.

I loved certain aspects of this series, while finding other aspects deeply annoying.

Damon Rain has done an excellent job at building a world of real but imperfect power. Power isn’t interesting if it’s total. That’s why every superhero needs to have a nemesis or a weakness like Kryptonite. In Rain’s Old Town, the struggle between Light and Dark magic is ongoing, and the balance shifts back and forth. Victory for the Light cannot be assumed. Furthermore, there are creatures who stay on the sidelines, whose needs and desires don’t particularly align with either side. The complexity of these relationships is fascinating.

In the universe of Magic Means, magic exists in many forms and underlies many talents. Each of the main characters in Magic Means has certain strengths or abilities. Scott is a Seeker, who instinctively knows what people need and how to find it for them. Izzie is a Healer; she can literally rebuild people's bodies and repair near-fatal damage, though the process severely drains her energy. Chuck is a Traveler, with the ability to create and use portals between distant locations, in this universe or in others. Inez, Izzie’s twin sister, is a scholar, with a deep knowledge of magical tomes, artifacts and rituals. At the start of the series, she’s serving the Tate family, power-hungry Dark mages who want to obliterate the remnants of the Light Enclaves, but her love for her sister plus a confrontation that exposes the deep evil of the Tates convinces her to switch sides.

Probably my favorite character in the series is Mack, Scott’s old friend who joins him in opening an occult store in the historic Van Veld building. At first Mack’s talents seem very mundane: he can fix anything, from broken cell phones to cash registers. He instinctively understands electronic and mechanical things. Then it turns out that, unlike most humans, he can also see fairies. And he’s fated to be the lover that sweet succubus Lilith has been waiting for all her life.

The Van Veld building, with its secrets and its wonders, is almost a character in its own right. It’s wonderfully imagined, the sort of place that might show up in one of my dreams. Dozens of levels, dozens of rooms, each one resonating with the power of Light.

Another aspect I enjoyed was the lively and varied portrayal of sex – and its power. Many of the sex scenes involve Scott. His talent as a Seeker makes him hyper-aware of his lover’s desires. The author shows us, in vivid detail, how this works. I found this convincing and arousing.

The books have an episodic quality, almost like a TV series. There’s no single narrative arc, but instead many small crises and resolutions, though the story does progress and the characters change. I was reminded of the many years of Buffy the Vampire Slayer. Just as with that series, it’s hard to remember what happened in the earlier episodes.

Probably the most annoying aspect of these books was the author’s persistent grammatical errors. The books are full of run-on sentences (comma splices) that drove me crazy. Of course, I’m an editor and an author, so I am hyper-sensitive to this sort of issue, but that’s another reason why it took me so long to finish the books; after a while, I just found the mistakes too aggravating.

It’s clear from the author’s notes that for him writing this series is a labor of love. You feel that when you’re reading, too. The story feels genuine, honest, an emanation of the heart, not the mind.

How many books are there in the series, or is he still writing? It's an intriguing premise, but like you, the errors would probably pull me out of the story also.

These kinds of multi-volume "starter" sets is how I originally got hooked on Laurell Hamilton's Anita Black, Vampire Slayer series. For a while, my husband bought me every book as they came out. But by about book 10, I started getting fed up with some issues in the stories. I just read that book 17 or 18 just came out? No thanks.

I think there are at least another three books. But a good series can definitely turn into an addiction! That's how I was with Game of Thrones.

To be honest, I don't know how an author can keep a series "fresh" after a dozen or more books. I certainly couldn't. After five Vegas Babes books, I'd had enough.

I have a series of 4 books I thought I was done with--but the characters have one more idea they want me to pursue. I have another series of 6 books, with one half-finished, and another just started. But to keep going with the same heroine or hero after 10 books? I think I'd have enough also!