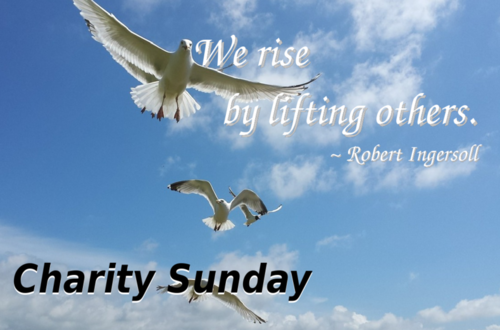 Welcome to the final Charity Sunday for 2019!

Lots of us go home for the holidays in December. That got me thinking about the whole idea of “home”. What would life be like without safe, comfortable shelter? A roof over our heads, doors to keep out intruders, windows to view the world?

There are way too many people in today’s world who don’t have this kind of home – people who live in shacks or tents, shanty town slums or abandoned garbage bins. At this time of gathering together, I’ve chosen to support Habitat for Humanity, an organization dedicated to building homes for those who need them.

You may already be aware of Habitat’s work. They work through local affiliates, volunteers who raise money, acquire materials, and work with the intended residents to build new shelter. What makes Habitat special, though, is that it doesn’t build homes for the people who will occupy them. Habitat builds with those people. A core concept in Habitat’s approach is the idea of “sweat equity”. To receive help from Habitat, you have to be willing to invest your own labor. You must make a commitment, learn the necessary skills, put in the time and the energy to help create the home of which you dream.

I really love this notion. People value the fruits of their own efforts. Furthermore, Habitat’s beneficiaries, by learning how to build, can help others in their communities do the same. 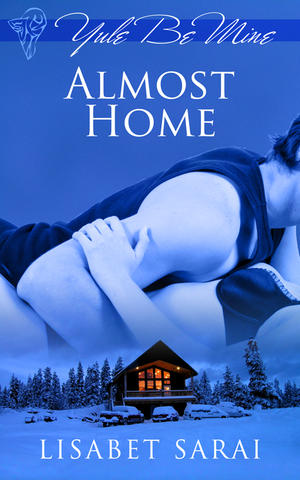 The mug of tea cupped in her hands chased the last bit of numbness from Suzanne’s fingers. Propped up on a couch in Gino’s spacious kitchen, swaddled in quilts, she watched him toss another log on the roaring fire. He moved with easy grace, a man at home in his own skin.

The heat from the blaze matched the desire simmering in her belly. She felt her body expanding, unfolding. Her tension and fear evaporated. In their place came delicious comfort edged with arousal. Gino poked at the glowing timbers piled on the hearth. She admired the line of his broad back and the curve of his buttocks under the stretched denim.

He gave her a smile that rivalled the blaze he tended. “Suzanne?” He sauntered over to sit beside her half-prone form. “How are you feeling?”

“Much better, thanks to you. I don’t know what would have happened if you hadn’t come along.” She grasped his hand, entwining their fingers. He laid his other hand on top. It might have just been a gesture of friendship, but it sent sparks swirling through her. Her nipples tightened into hungry knots.

“You know, Suzy, I had this strange feeling. Jack and I had just settled down to our annual game of chess—one of our traditions—when suddenly I knew I had to leave. I told them I had a headache, and actually, it felt a bit that way—some kind of urgent need pounding in my skull. When I saw the car burrowed into the snow bank, I knew right away that it was you.”

“I’m so grateful.” He was close enough now that she could smell him, wood smoke with an undercurrent of wintergreen. “I was pretty scared.”

“You should have let me drive you,” Gino scolded. “But then you always were stubborn.” He leaned back, away from her, and released her hand. Suzanne wanted to pull him closer. Why did he hesitate? Didn’t he know she wanted him?

“I’ve got to be back in California by Monday morning,” she murmured. “Important meeting. But I don’t suppose there’s any possibility of getting to my hotel tonight, is there?”

“Not a snowball’s chance in hell,” Gino replied triggering a laugh that relieved some of the strain. “The governor’s called for a state of emergency. The Mass Pike is closed to all but emergency vehicles. Latest forecasts say we’re going to get two feet.” He caught her eyes as though trying to read her thoughts. “Lady, you’re stuck here for the foreseeable future.”

Suzanne reached for him. “In that case, why don’t you kiss me?”

He allowed her to bring his lips within inches of hers. Then he stopped her. “Are you sure? I got the idea back at the party that I made you nervous. That you still weren’t interested in being more than friends.”

“You do make me nervous—but in a good way. I feel like a teenager when you’re around, hot and bothered, excited and embarrassed. You’ve always made me feel that way.”

“I’m beginning to think so. Why don’t you kiss me and we can find out?”

He didn’t need a second invitation. Sliding his hands under the blankets, he gathered her to his chest and planted his firm lips on hers. Even though she was expecting this kiss, it still shocked her. Sudden heat swept through her like a forest fire. Any last reservations burned to a crisp. He took possession of her mouth, scarcely allowing her to take a breath. Meanwhile his hands roved over her curves, sending waves of electric pleasure shimmering down to her sex.

The velvet transmitted every brush of his fingertips. She might as well have been naked. It hardly mattered that she was wearing a bra or panties. He rolled one brazen nipple between his thumb and forefinger, waking tremors in her clit. She gasped into his mouth. He cupped her damp mound through her clothing, his lips still glued to hers. She spread her legs, begging for more, and he obliged, rubbing the velvet back and forth along the groove of her pussy.

His groping made her increasingly desperate. As though he read her thoughts, he broke the kiss. “I want to see you naked,” he breathed. “I always have.”

She flung the quilts away and pulled her dress over her head in one fluid motion. He watched, clearly fascinated, eyes gleaming in the firelight. Reaching behind her, she unhooked her crimson bra and set her ample breasts free. She cupped them like an offering, her own hands feeling almost as wonderful on her flesh as his. He fastened his mouth on one taut nub, pinching the other. The sight of his dark head suckling was almost enough to make her come. Gino, she thought, buffeted by a confusing mix of emotions. After all this time.

Don’t forget to leave a comment; every one means another $2 for Habitat. And I hope you will visit the other blogs participating today.

Happy Holidays to you and yours!

Great excerpt, and a great cause to support. Habitat for Humanity has been very busy in my hometown of Dayton, OH after the Memorial Day tornadoes left thousands of people homeless when their homes were destroyed. Dayton Strong!

Nice excerpt and cause

So hot! Thank you for the excerpt :)

Wonderful cause and a great excerpt. Hope your holidays and 2020 are awesome! :)

Excellent cause, Lisabet, and a great excerpt. I love these charity Sundays.

I have a friend who works on homes with this group. They are amazing.

I love this idea and the cause. Happy Holidays and the very best wishes for 2020!

A wonderful cause especially at this time of year, Lisabet.
Happy Christmas, everyone, and Blessings for the New Year.

Lisabet, this is a wonderful choice! I've always liked that the homeowner contributes to the build, but what a great tribute to the idea of family, to provide a home.

Great charity to support. Thank you for the excerpt and Happy Holidays!

Fantastic excerpt and charity! Happy holidays and wishing you the best for 2020!

Fabulous excerpt, Lisabet, and great cause, as always!

Thank you so much for your efforts all year!