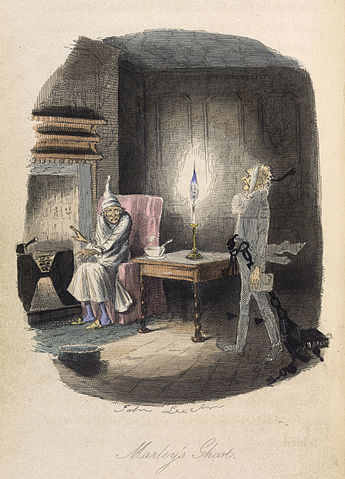 Charles Dickens’ A Christmas Carol was part of my family’s holiday tradition for as far back as I could remember. An animated television special shown every year (with squinty-eyed character Mr. Magoo playing the role of the miser Scrooge) first introduced me to the story. I was probably ten or eleven when I read the original. Even at that age, I could appreciate the messages embedded in the tale: love is much more important than money; don’t let the joys of the present pass you by. Scrooge’s delight when he discovers that he hasn’t missed Christmas morning after all captured the joyous essence of the season.

When Totally Bound put out a call for a series of M/M paranormal shorts called “Christmas Spirits”, back in 2014, I immediately thought about adapting Dickens’ classic. Like the famous Carol, Tomorrow’s Gifts, my tale revolves around recognizing one’s current blessings.

Michael loves his burly, powerful partner Neil, but he's too embarrassed to share his secret fantasies of submission and surrender. Frustrated and confused, he wonders whether he and Neil really belong together. Then, on Christmas Eve, Michael receives a visit from a sexy Dom, Thorne Wilder, who claims to be his lover from the future. Thorne shows Michael scenes from a wild life of sexual excess that he claims they'll share if he breaks up with Neil. The ghostly Dom satisfies Michael’s kinky needs in ways Neil never has. Should Michael trust the ghost of Christmas future? Or does his true future lie with Neil?

Although Tomorrow’s Gifts is definitely X-rated, I borrowed a lot from Dickens. Like Scrooge, Michael at first denies the reality of his spectral visitor. As in the Dickens book, the scenes that Thorne reveals gradually increase in emotional intensity. Just as the the ghost of Christmas future shows Ebenezer Scrooge a final vision of his own death, Michael’s glimpse of his own mortality – and Neil’s reaction – teaches him his final lesson.

And as in Dickens, the spirits accomplish it all in a single night. Michael wakes on Christmas morning, relieved at having survived and brave enough – just barely – to be honest with his partner about his true desires.

I’ve written a number of M/M books since then, including the paranormal thriller Necessary Madness and the dark science fiction novel Quarantine. As my “first born”, though, Tomorrow’s Gifts has a special place in my heart – along with A Christmas Carol.

I’ll leave you with an excerpt from Tomorrow’s Gifts, to whet your appetite. 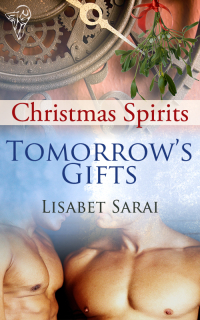 “So, Michael. Have you been a good little boy?” Neil loomed over me, one hand against the wall on either side of my head. “Do you deserve the goodies that Santa’s brought for you?” Leaning forward, he trailed a wet tongue up my neck, from my open collar to just below my earlobe. When I squirmed in response, he flattened his pelvis against the lump growing in my jeans and fastened his mouth on mine. The fake beard got in the way. He ripped it off and resumed kissing me, while his hands slipped around me to cup my ass.

I loved the way Neil kissed with his full body, investing his entire being in the process. I snuggled against his red felt jacket, allowing him to take possession of my mouth. His kisses were deep, wet, full of soul. They made me light-headed. They made me hard. I could taste the beer he had drunk at the party and the peppermint candy cane that we’d shared on the way home, but underneath there was the familiar flavour of Neil, my housemate, friend and lover.

I forced my hand between our bodies and fumbled at his zipper. “Oh, are you being a naughty little boy?” he breathed in my ear. “Santa will have to punish you.”

His words thrilled me. Oh, if only he would make good on his threats! I knew from experience that he was only teasing, though. But maybe tonight would be different. With the holiday high, the post-party buzz, maybe tonight he’d give me what I craved.

I wrenched his fly open and wriggled through the opening in his briefs until I had what I wanted—the silky sensation of his cock-skin under my fingers. My own cock throbbed as I stroked him, marvelling at the contrast between the rock-hard flesh underneath and the satin-smooth layer that enclosed it.

Posted by Lisabet Sarai at 5:02 AM

Fascinating to hear the genesis of the story idea, thanks for sharing. Happy holidays to you as well!