Race you to the bedroom.... #HolidayRomance #EroticRomance #RomCom 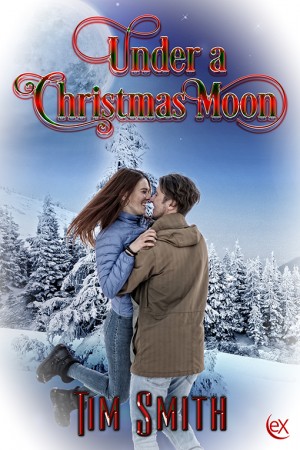 ‘Tis the season for that inevitable combination of holidays and romance. The two go together like homemade cookies and hot chocolate, and have long been a staple of books and made-for-TV movies. My latest offering to the list of short holiday reads is Under a Christmas Moon. This is the third installment in an unofficial series I began three years ago with Santa Slept Here, followed by Cupid Says Happy New Year. The two lead characters are the same, and the stories follow their developing relationship, but they don’t need to be read in order.

Scott Burke and Lisa Berger were high school sweethearts once upon a time, but that was fifteen years ago. Sparks were rekindled one year ago, when Lisa found herself stranded in Scott’s hometown on Christmas Eve and they realized they never should have parted. Now they’re planning their first Christmas together as a couple, but a little thing called life keeps getting in the way. Both of their careers keep them busy, especially Lisa’s, and Scott begins to feel like the odd man out in the relationship. Can the two lovers keep the flames burning, or will they decide it isn’t worth the trouble?

I’ve long been a fan of the premise of two people who knew each other once upon a time, but it wasn’t the right time for them to pursue a relationship. They find each other after they’ve been apart, and discover they belong together. That’s the theme with these two characters. Scott became smitten with Lisa when they were in high school fifteen years earlier, but he was too shy to do anything about it. She was also the most popular girl in his class, and he doubted she would ever want to date him. Now that they’ve both grown up and been kicked around by life, they discover they have a lot in common.

Lisa turned off one of the lamps then stood beside Scott with her arm around his waist. They looked at the Christmas tree.

“Yeah, it does. I’m glad you like colored lights on a tree. I can’t stand the ones that are all white.”

“Me, either. A Christmas tree should be bright and colorful. It needs to scream festivity.”

“Does this one scream loud enough for you?”

Lisa examined the tree for a few moments. “It will after you move that Santa closer to the angel near the top.”

Scott groaned and rolled his eyes. “I give up.”

He took their wine glasses to the kitchen to refill them then returned to the living room. Lisa sat on the floor in front of the fireplace. The blue and yellow flames danced along the faux logs and gave off just enough heat to take away the chill. Scott gave Lisa her glass then sat next to her. He had loaded up the stereo with their favorite holiday CDs.

She sipped her wine. “Our first Christmas together.”

He hugged her. “That’s a nice feeling. Any regrets about leaving Memphis and moving back here?”

“None. Now I’m closer to my family and I get to be with you.”

Scott sipped his wine. “No second thoughts about moving in with me instead of getting a place of your own?”

Lisa set their glasses on the hearth. She pulled Scott close then kissed him. “Not a one. When we reconnected last year and we both realized how much in love we were, it was a no-brainer.”

He reached up to brush a stray strand of hair from her face. “It was for me, too.”

Scott embraced Lisa and kissed her, slipping his tongue into her mouth and massaging her lips with his. Her scent kicked his libido into overdrive, and he ran his hands along her back.

She peered into his eyes. “Did you have fun today?”

“Yeah, I did. It was nice having you all to myself. Think we can do that more often?” Cupid Says Happy New Year

“Mm-hmm.” She traced her finger along his jaw. “Remember last year, when we finally made love for the first time?”

Arousal stirred at the memory. “Of course. You were incredibly hot that night.” He hesitated. “And you have been every time since.”

“Thank you for adding that last part.”

She kissed him again then peered into his eyes, giving a sultry look. “Race you to the bedroom,” she teased.

“What do I win if I get there first?”

“Anything you want to do with me.”

She flashed a playful smile. “The same thing.”

They went to the bedroom upstairs. Scott undressed in the faint light, then watched Lisa do a leisurely striptease. His gaze devoured her as she pulled her sweater over her head, followed by unhooking and shrugging off her black lace bra, giving her firm breasts their freedom. She unfastened her tight jeans, then wriggled them over her hips, turning away when she tossed them aside before seductively peeling her matching panties over her tight, round ass.

Damn, she knows just how to get to me.

This is a light romantic comedy with a cute ending, reminiscent of what you see on Lifetime or Ion this time of year. Be forewarned that there is some adult content. If you like this one, check out the first two in the series, Santa Slept Here and Cupid Says Happy New Year. Happy reading!

Sounds like a sweet, sexy story, Tim. Hope it does really well!

Thank you, Lisabet. It's always a pleasure to be your guest. May your New Year be blessed and prosperous.