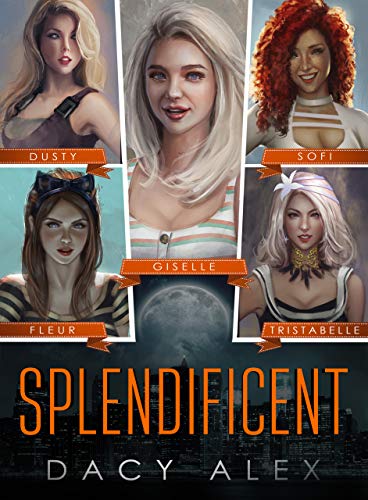 Giselle Nyfall would never claim to be extraordinary. The buxom blond California girl spends her free time streaming video games, crushing on celebrities and cruising the web to research unusual sexual practices. She has a dream, though – to get out from under the thumb of her controlling socialite mom and move to New York City for college.

When, against all expectations, the C+ student is accepted to elite Hemera University, Giselle is initially ecstatic. Then her dorm room turns out to be non-existent, due to a computer glitch. Not to worry, though. Anika Lindgren, the curvaceous and seductive Head of Student Services, informs Giselle that she’s being housed in an Upper East Side condo reserved for “extraordinary young women”.

The baroquely-decorated, luxuriously-appointed condo makes Giselle wonder whether this assignment might also be an error. Her doubts grow when she meets her roommates: tough, foul-mouthed Boston boxer Fleur Flanagan; flighty, violent, sparkle-dispensing southern belle Dusty Blackwood; social-media-obsessed redhead Sofi Poe; and “Viking Barbie” Tristabelle Elvrina, who claims to be an actual princess. They’re all drop-dead gorgeous, with a preference for skimpy outfits that show off their ample charms. And they all seem to be sizing up poor Giselle – whether for their next sex partner, their next meal, or their next murder victim isn’t quite clear.

When zombified husbands start showing up at the condo, Giselle discovers that her apartment mates are more than just bodacious babes. Each of them is a supernatural being of some sort. Fleur’s part vampire, part succubus; Dusty’s a failed fairy; Sofi is a kitsune, a Japanese fox shifter; and Tristabelle is the scion of an ancient Elven royal family. As more men fall to the sex curse, magic-enslaved minions kidnap Giselle for dark rituals, and raven-headed demons attack their limo, the girls’ powers are put to the test. Will they survive the bacchanalian excesses of the wildest party in the Underworld? Just how extraordinary are these young women? And what is Giselle’s role in this salacious dance of good and evil?

It’s worth buying Splendificent just for the fabulous cover. I defy you not to drool at the lovingly rendered images of Giselle and her supernaturally-talented roommates. Of course, you can just ogle them online. If you don’t actually read the book, though, you’ll be missing a treat.

The novel is marketed as “urban fantasy”, but in my opinion, it really defies categorization. True, it’s set in the quintessential city (New York), and teems with the type of magical creatures who normally populate the urban fantasy genre. However, rather than fleshing out a universe of paranormal forces that parallel everyday existence, the author seems more interested in the flesh of his enticing female characters. The bad guys are basically foils for showing off the girls’ skills and their substantial feminine charms.

At the same time, this isn’t really erotica. For one thing, there’s very little actual sex until the final chapters, just a lot of titillation (with the emphasis on “tits”).

The book is hilariously over-the-top, and the silly but snappy dialogue kept me giggling. Giselle, the “chosen one”, is far from the typical urban fantasy heroine. She’s physically clumsy, socially awkward, and not overly intelligent. Still, you can’t help but love her innocence and bumbling sincerity.

Although magic isn’t really the true focus of Splendificent, the book nevertheless brims with imagination. The author does a great job conveying the strangeness of Giselle’s experience. As an example, here’s one of my favorite passages. The girls are desperately fighting off a demon attack.

Giselle saw something that left her stammering, her mind struggling to process this glorious sight that had no clue it didn't belong in this world.

It was a sword -- that she knew. It was being held by a very angry, very murderous person who was supposed to be Princess Tristabelle Elvrina of Golden Land.

The hilt of this treasure was made of translucent ice, with veins of the same substance running through it. The pommel or end of the sword was white ice magic crystal. Impossibly, its crossguard was a mind-bending set of wings that flapped as this murderous woman lunged forward. A lunge headed by a blade made of ice and tangled in mistletoe. Its icy blade was encircled by also frozen vines.

Giselle felt a pinch of pity for what she guessed were the countless victims of this mystical weapon. Even when the ice blade plunged into the demon's stomach, and his grotesque body began melting into sludge that disappeared when it hit the ground, her sympathy went out.

The person who was supposed to be a princess of an insignificant Scandinavian country let her sword fade from her hand in a cloud of sparkles.


Overall, it’s rather difficult to describe Splendificent. However, if you appreciate originality, humor, sexual innuendo and gorgeous women, I suspect you will enjoy it as much as I did.