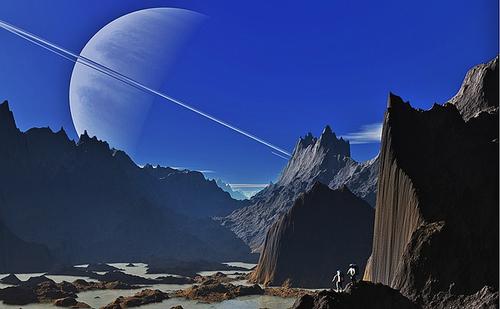 Science fiction was one of my first loves. If you'd peeked into my room pretty much any afternoon when I was in school, you would have found me sprawled across the bed with my nose in a book, and it's quite likely it would have been sci fi. I couldn't have been more than seven or eight when I began exploring Eleanor Cameron's Mushroom Planet. Then I moved on to Heinlein's and Bradbury's visions of Mars (very different places!), and the world of Asimov's Foundation trilogy. I was in high school when I devoured Stranger in a Strange Land, fell head over heals for Valentine Michael Smith, and developed my enduring fascination with polyamory.

My husband introduced me to Philip K. Dick, Stanislaw Lem and Fritz Leiber. Then we became friends with a woman who taught English at a local university. She organized a scifi reading group. What a glorious year and a half that was! Every month we'd read a new book and discuss it, over delicious potluck dinners (with a strong emphasis on the desserts). I sampled a raft of new authors: Olivia Butler, Greg Bear, Sheri S. Tepper, Pat Cadigan, Harry Harrison, James Tiptree, David Brin... I was like a kid in a candy store!

I discovered that I much preferred “soft” science fiction – stories that start with some premise about society or history and then explore the consequences. For example, The Man in the High Castle, which is the first Dick book I read, turns on the notion that the United States and its allies lost World War II. The author then proceeds to build a world in which the Japanese and the Germans have divided up the American continent, and San Francisco is mostly Asian. (Gee, sounds like the present!) Another favorite is A Canticle for Lebowitz, by Walter M. Miller, Jr. In a post-apocalyptic future, devout communities of monks act as custodians for the mysterious knowledge and artifacts of vanished civilization. One of the most sacred of all texts is written in the hand of Saint Isaac Lebowitz and begins “gallon of milk/loaf of bread/...” Then there's Kate Wilhelm's The Year of the Cloud. I don't remember where I picked this novel up – it's obscure, far less well known than her masterpiece Where Late the Sweet Birds Sang – but I remember now, decades later, how it impressed me. The earth passes through a cloud of stellar dust. The dust has the effect of “thickening” water, turning it from liquid to a kind of sludge. Having posited this single fact, Wilhelm then proceeds to show how this turns society upside down, as humans (over ninety percent H2O) die and usable water becomes increasingly scarce. I found the book chilling but totally plausible, once you had accepted the triggering event.

So when I began publishing, why didn't I write science fiction instead of erotica? Partly because I didn't dare! I doubted my ability to create a compelling yet believable alternative world. And I'd read so much science fiction by then, I felt as though all my ideas would be derivative.

Bodies of Light is about the non-corporeal nature of desire. Since my primary genre is erotica/erotic romance, it's natural that the sci fi themes that interest me relate to sexuality. 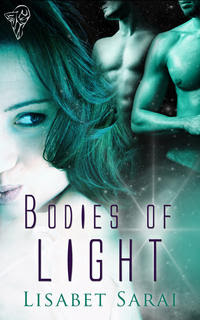 Physicist Dr. Christine Monroe has devoted her lonely life to research on hyper-space travel. Guilt about her continued failure leads her to sign on to the Archimedes, a sub-light-speed mission aimed at establishing a colony in the Sirius B system. When she wakes from suspended animation, she discovers that the ship is wildly off course and the rest of the crew are dead due to equipment failure. At first she thinks the two handsome strangers who show up on the ship are figments of her imagination - erotic hallucinations created by isolation and stress. However, Alyn and Zed are solid, real, and ready to sacrifice their lives for the strong woman they've found stranded in deep space. As her ship begins to disintegrate, Christine must choose between the planet she was sent to save and the two alien beings she's come to cherish.

Quarantine focuses on politics and prejudice. It takes place in a dystopian near future, when all known homosexuals (identified by a genetic marker) have been imprisoned in remote quarantine camps, ostensibly to protect the general population from the plague the gays carry. After seven years of confinement, inmate Dylan Moore will do anything for freedom, including seducing Rafe Cowell, an ex-gang member sentenced to a bleak stint as a camp guard. 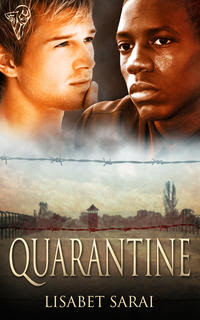 The novel follows the two men as they become fugitives, fighting murderous androids, homophobic ideologues and their own mutual distrust. Hiding in the Plague-ravaged city of Sanfran, Dylan and Rafe learn there's far more than their own safety at stake – that the lives of millions more people depend on their success in resisting the shadowy Guardians who control and manipulate what's left of American society.

I'm afraid that neither book will win a Hugo (although Bodies of Light received a Best Book award from Whipped Cream reviews). Nevertheless, I'm incredibly proud that I've finally added my own visions to the science fiction canon.

I’ve accepted that no scifi I write is going to be Philip K. Dick (though he might well have felt at home in Rafe's and Dylan's world) – but it's my attempt to honor my life long love.

I'm giving away a copy of Bodies of Light to one person who comments on this blog post. Tell me about your favorite sci-fi title - or just say hi! Don't forget to include your email address.

I am glad you followed your love of sci fi. I have always wanted to read Quarantine but I never did. Bummer.
debby236 at gmail dot com

Hi, Debby -- well, if nobody else comments, I will send you a copy of Quarantine!

Better late than never, right? I'm also a huge sci-fi fan, but I've never been able to write anything in the genre. I have a couple of paranormal vampire romances. I'm working on a werewolf saga. But the only sci-fi I've ever written that I'm proud of, is a short story. An old professor wanted me to turn it into a novel. I still might, some day. But alas, like you, I fear my mind is so full of sci-fi ideas, I might end up copying someone else's thoughts. I envy you that you've managed to get 2 sci-fi novels pubbed.