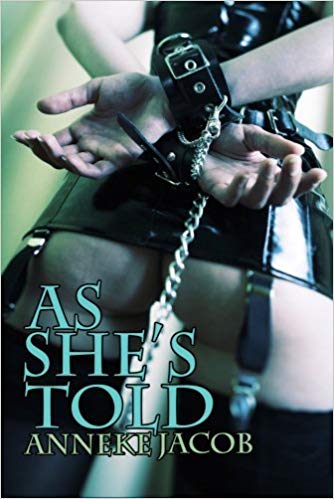 Anneke Jacob's remarkable novel As She's Told presents an extreme case of this sort of reciprocity. Her heroine, Maia, craves complete submission. She wants to be owned—the life of a slave with no choice at all. She has harbored these desires since childhood, struggling to make her way in the world, pretending to be a "normal" person, but knowing that only this total relinquishment of her will can make her feel whole and safe.

In each chapter, Anders introduces new torments or requires new adjustments. A waist chain is replaced by a tight corset, then labial piercings, then a chastity belt, then a bit and bridle and leather mitts that turn Maia into a dumb animal. In the early stages, he regularly checks with his would-be slave to make sure that she has not changed her mind. By the time they have been together for a year, however, she is truly his, and he stops asking her to describe her feelings or give him feedback.

We've seen all these notions before, in Carrie's Story, in the Beauty Trilogy, in The Story of O. The difference is that in As She's Told, these are not treated as fantasy. Ms. Jacob is convincingly realistic in her depictions of what Anders does and how Maia feels. At some level, this book is still a fantasy, a thought experiment exploring how an extreme Master/slave relationship might develop, but the tone demands that the reader take the whole process seriously.

This is not (despite some horrified reviews on Amazon.com) a story of abuse. Anders does not negotiate, but he cares for his slave and makes sure that she will not be seriously injured. When he offers his brother, cousin and several women friends free use of Maia's body, he makes sure that they use condoms, even for oral sex. He is giving Maia what she wants, and she is suitably grateful. Still, I wouldn't want Anders for my Master. He's too interested in stripping away Maia's pretensions of being human. He delights in turning her into an animal or even an inanimate object. Toward the end of the novel, Maia spends eight weeks without the use of her hands, sleeping in a stall, forbidden to speak, and worst of all, banished from her Master's bed. I can scarcely imagine this—it sounds too horrible to be endured (far worse than being forbidden to or unable to come). But then, I'm not Maia. Ms. Jacobs managed to make me believe that Maia could and would endure it, in order to please Anders.

As She's Told is not without its faults. It is a long book without much plot. Each chapter pushes new limits, but there's no climax and very little conflict. I kept waiting for the other shoe to drop, for Maia to rebel or for someone to be hurt or killed, for some revelation or resolution, but in fact nothing much happens. We're led to believe that this relationship will continue, satisfying both of the participants, as they live out their complementary fantasies together. I think that this is Ms. Jacob's point, to suggest that such a relationship could actually exist and that it could be healthy and mutually fulfilling.

I don't know whether I am completely convinced. People change. Maia is very young (she graduates from college in the course of the book) and Anders not much older. Furthermore, it seems that there must be an objective limit to the escalation Anders practices on Maia. My Master and I have debated the question of escalation, the continued pushing of limits. Clearly there must be some point when you can't push any further without doing serious physical harm. What happens then? Do the participants get bored or jaded? Or is it the case that a truly imaginative dominant will never run out of things to do with his slave?