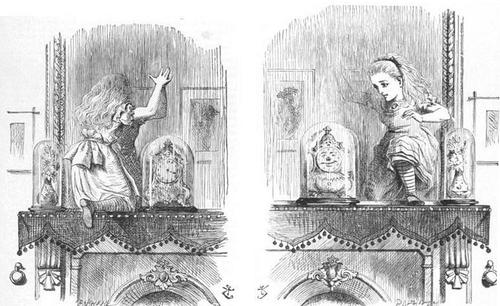 We still have a few days left in National Poetry Month (celebrated every April since 1966!), so I thought I’d share seven of my favorite poems.

I was introduced to poetry at a very young age. My dad, who was a musician (among his many other talents) composed poems for my siblings and me, then set his cute doggerel to music. Both my parents read to us—poetry as well as prose—before I learned to read myself. I guess it’s not surprising that I started writing my own poems at the age of six or seven.

Anyway, here are some of the poems that are special for me. Some I encountered in the distant past; one, only a few days ago.

‘Twas brillig, and the slithy toves
Did gyre and gimble in the wabe:
All mimsy were the borogoves,
And the mome raths outgrabe.

The Alice books were among the first novels I read. I loved Lewis Carroll’s verse as much as his fantastic stories. This classic poem illustrates how the patterns of English grammar can convey meaning even when the words themselves are nonsense. We can tell that “brillig” is a time of day (or maybe a description of the weather); that “toves”, “borogoves” and “raths” are creatures of some sort; that “gyre”, “gimble’, and “outgrabe” are actions; that “mimsy” and “mome” describe the creatures.

This poem comes from Through the Looking Glass (or more correctly, “Through the Looking Glass, and What Alice Found There”.) As the mirror above her fireplace dissolves into mist, Alice steps through to find herself in a similar, but distinctly twisted reality. She picks up one of the books from the shelves, to find it’s written backwards, but is able to read the poem by holding it up to the now solid mirror in the looking glass room.

Like me, she manages to get some sense from it, despite the made-up vocabulary!

The Highwayman by Alfred Noyes

The wind was a torrent of darkness among the gusty trees.
The moon was a ghostly galleon tossed upon cloudy seas...

I don’t remember where I first encountered this tale, but I’m pretty sure I’d read it before I reached puberty. Nevertheless, the tragic romance embodied in the poem deeply touched me. Only now do I realize it’s actually a paranormal romance!

This poem clearly shows the relationship between poetry and music. Its strong rhythm and repeating refrain are like a song.

I recently returned to this poem, finding I liked it as much as ever. Actually, I have a plan to write a story based loosely on “The Highwayman”—but with a much happier ending!

Life has loveliness to sell,
All beautiful and splendid things,
Blue waves whitened on a cliff,
Soaring fire that sways and sings,
And children's faces looking up
Holding wonder like a cup.

In seventh grade, we had an activity in English class called “recitation”. Basically, the goal was to give us practice in public speaking. For some assignments, we had to teach the class how to do something. For others, we had to make a logical argument. The assignments I recall best, though, are those where we had to memorize a piece of verse and declaim it to the class.

“Barter” was one of the poems I chose to recite. I can still do so. The message in this brief, poignant poem resonates with me, decades later.

The Love Song of J. Alfred Prufrock by T.S. Eliot

Let us go then, you and I,
When the evening is spread out against the sky
Like a patient etherized upon a table;
Let us go, through certain half-deserted streets,
The muttering retreats
Of restless nights in one-night cheap hotels
And sawdust restaurants with oyster-shells

The Summer Day by Mary Oliver

I’m embarrassed to say that I’d never heard of Mary Oliver, until I noticed a close friend using the stunning last lines of “The Summer Day” as her email signature. This poem is a gem, capturing the breathless beauty of a single moment then showing the deep truth it contains.

the garden of delight by Lucille Clifton

I first read this poem only a few days ago, posted by one of my high school friends (a poet herself) on Facebook.

How few words are necessary, to make a miracle.

A poem should be palpable and mute
As a globed fruit,

Reading Clifton’s poem—which I believe is partly about what it means to be a poet— inspired me to look up what is perhaps my favorite poem about poetry.

Alas, I aspire to these heights but don’t come anywhere close. Still, if you’d like to read some of my poems, most of which are love poems, you can find them at my website on the free reading page.

By the way, be sure to check out the other Saturday Seven posts, all linked to the Long and Short Reviews post today. Just to sweeten the pot, LASR is giving away the seven books they're listing!

Posted by Lisabet Sarai at 4:01 AM

We have similar taste in poets!

Mary Oliver had such a way with words. I haven't read anything from her in ages, but now I want to change that.

Incidentally, my Saturday Seven post this week was also about poetry: http://lydiaschoch.com/saturday-seven-my-favourite-langston-hughes-poems/

Thanks for playing and the first two poems you listed are also two of my earliest loves--I still remember the shiver of horror at Bess's sacrifice!

I looked at your title and the first thing I thought was "um...I don't like poetry" BUT...you picked several poems I had forgotten and they are ones I love. SO...I apologize for even thinking a bad thing about poetry. What a nice Saturday Seven blog!

Great post. I'd forgotten how much I love the work of TS Eliot. :)
Here's the link to my post: https://wendizwaduk.wordpress.com/2018/04/28/saturday-seven-7-records-i-discovered-because-of-the-library-with-meganslayer-satseven-saturday7-music-records-librarymonth/

I memorized "The Highwayman" when I was in middle school...even now, when I get to this:

Down the ribbon of moonlight, over the brow of the hill,
The highwayman came riding,
Riding, riding!

Ogden Nash: Reflections on Ice-breaking
"Candy is dandy,
but liquor is quicker."

Introspective Reflection
"I would live all my life
in nonchalance and insouciance,
Were it not for making a living,
which is rather a nousiance."

Poetry is an attempt to paint a picture with words; or to capture an emotion, which is ephemeral, in words, which are not. Well-done, it's wonderful. Badly-done poetry is what gives the genre a bad reputation.

When I've taught poetry, I've explained that if a poem doesn't talk to you, to anything you've personally experienced, that doesn't mean it's a bad poem. You can still analyze it and appreciate its quality. But it's not speaking to you, so it's not your type of poetry. Students seem relieved to not be forced to pretend to like poems that say nothing to them.