From my earliest years as a reader —which began when I was four—science fiction has been one of my enduring loves. The first sci-fi books I remember were The Wonderful Flight to the Mushroom Planet by Eleanor Cameron and The City Under the Back Steps by Evelyn Sibley Lampman. I doubt I was more than seven at the time, just introduced to the wonders of the library.

Of course, I grew up during the dawning space age. I was in fourth grade when Alan Shepard circled the globe in his tin can. Men landed on the moon the year I graduated high school. Indeed, I wanted to be an astronaut, until I learned that there was no way they’d take someone with my serious myopia and flat feet. (The fact that I was female never seemed to me to be an obstacle.)

Over the years, I’ve read lots of sci-fi, though to be honest, much of it has been forgettable. However, here are seven science fiction titles whose memories I cherish, books that opened new vistas for me or changed my view of the world.


The Martian Chronicles by Ray Bradbury 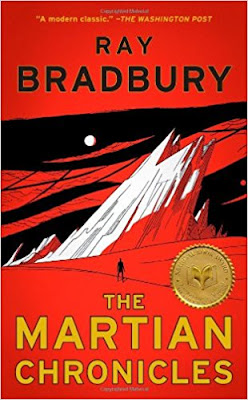 I’ve loved Bradbury ever since I first encountered his work. This book presents a poetic, nuanced vision of true strangeness. On a planet where man is the alien, there is much to be learned about ourselves. Beautiful, scary and intense, this book taught me that we humans weren’t the center of the universe.


Stranger in a Strange Land by Robert A. Heinlein 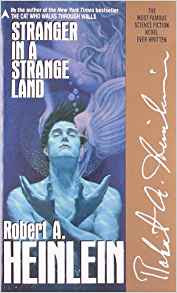 I read this when I was just past puberty, overwhelmed with hormones like all teens. I have to admit that what made the most lasting impression on me in this book was the sex. No, there are no explicit sex scenes in this novel. However, Valentine Michael Smith, the human brought up by Martians who is the “stranger” of the title, establishes a polyamorous tribe in which sex (“water-sharing”) is both ecstasy and sacrament, a connection of mind as well as body. I know my own views and experience of sexuality (often expressed in the stories I write) borrows a lot from the philosophy of this book.


The Man in the High Castle by Philip K. Dick 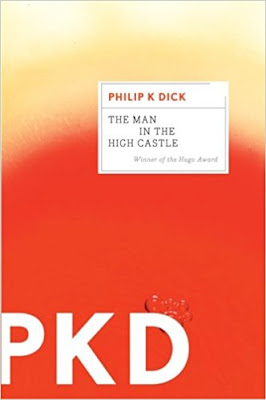 Hard as it might be to believe of a sci-fi afficionado, I’d never heard of Philip K. Dick until my husband introduced me to this book. (A love of science fiction is just one of many things my DH and I have in common.) I was totally floored by its audacity, its detail, the darkness of its themes and the brilliance of its exposition.

Dick paints a vivid picture of an alternative present in which the United States and its allies lost World War II. Starting from that single premise, he imagines a world in which the Nazis and the Japanese have divided the continent, then spins out the consequences.

How did this book change me? (Aside from making me a huge Philip K. Dick fan, that is!) It crystallized my awareness of what I like most about science fiction—the way one powerful idea, one modification of reality, can change everything. That’s the sort of sci-fi I usually like most, not the space operas with tons of technological marvels, or the interstellar epics with dozens of planets and civilizations. I’m interested in the social implications of technology, more than the technology itself. 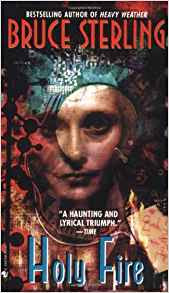 This book came out in 1997, and I probably read it soon after. It’s interesting what I do and don’t remember about the novel. The heroine, Mia, is an ancient woman, over a hundred, who undergoes physical rejuvenation. What I recall most vividly is the disconnect she feels between her gerontocrat mind and her youthful body. We like to fantasize about eternal youth, but Sterling does a fantastic job portraying the complexities that would likely arise if this technology were to become available.

As I am now well on the way to being an old crone myself, I sometimes fantasize about what it would be like to have my lithe, sexy young body back. When my thoughts tend in that direction, I recall this cautionary tale. 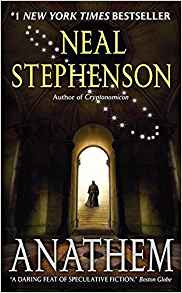 I said I don’t usually prefer science fiction books that construct elaborate new worlds, with their own cultures, languages and so on. Anathem is an exception, partly because it really is a book about ideas—competing ideas about the nature of the universe, time, man, and the earth, battling for supremacy.

Stephenson has a brilliant imagination but sometimes too little discipline. I’ve tossed his books halfway through because he didn’t know when to stop going off on tangents. In this massive novel, though, he keeps himself in check, building an exquisitely detailed universe in which science, and power, are centered in monasteries scattered over the earth. As was the case in the Middle Ages, these monasteries preserve the past, but also are limited by it.

I can’t count how many times, reading this book, that I stopped, amazed, at some incredible (and often slyly humorous) notion or description. You can read Anathem as an adventure, but I think it’s a far deeper effort by intent.


The Windup Girl by Paolo Bacigalupi 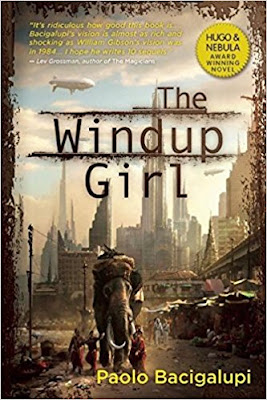 This novel, published in 2009, is hands-down one of the best science fiction books I’ve read—ever. Since it won both the Hugo and Nebula awards, I guess other people agree with me.

The book is set in Bangkok, in a not-so-distant future when the planet is crushed under the heel of the agro-conglomerates who control all the genetically modified food stuffs. Petroleum reserves have long since been exhausted. People use gene-edited beasts of burden and kinetic energy storage to accomplish their work. Thailand has preserved some original, non-modified seed stocks, though, and Company Man Anderson is determined to get control of this precious, subversive genetic material.

This book deeply impressed me, on a whole range of levels. The portrayal of Thai society and culture is so accurate (based on my past experience living there) that I can hardly believe the author isn’t Thai himself. The many characters are distinctive, rich, sympathetic yet highly flawed. Meanwhile, the conflicts and the environmental scenarios are all too believable.

I picked up a copy of this book at a used book sale. Since then I’ve bought it for at least half a dozen people as a gift, and recommended it to many more. Astonishing. 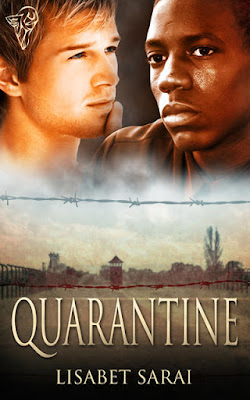 Wait a minute! Am I really about to include my own novel in this list?

Well, I’m talking about books that changed me. Despite my love of sci-fi, or maybe because of it, I haven’t dared write very much in this genre. Quarantine is to date my only full-length science fiction title. Writing Quarantine, a MM sci-fi romance, was one of the most difficult things I’ve ever done. The process gave me new respect for writers of sci-fi.

The book takes place in a dystopic near future. After a sexually transmitted plague kills millions and devastates society, a shadowy group steps in to restore order. The self-styled Guardians of American Greatness incarcerate all males who carry the “homogene” in remote internment camps, supposedly to protect the population from a recurrence of the plague. One of my protagonists, Dylan, has been a camp prisoner for seven years; the other, Rafe, is one of the few humans who supplement the robot guards that maintain camp security.

Rafe is H-negative. He’s not gay. Yet he falls in love with the brilliant, desperate young detainee. Together they escape to the riot-scarred city of SanFran, where they find both allies and enemies.

Throughout the process of writing this book, I worried that my world wasn’t sufficiently imaginative to hold readers’ interest. I agonized over details, struggled with back-story, lost my self-confidence. I stopped working on the book for more than six months, convinced it was worthless.

Now, though, I think it’s one of the best things I’ve written, with a lot more substance than most romance (including my own). The process taught me that sometimes, creation involves the pain of self-doubt.

Anyone have any suggestions? What science fiction books have made the most impression on you? Leave me a comment to let me know, and I will enter you into a drawing for a free copy of Quarantine. (Don’t forget to include your email!)

Heinlein is classic. Anyone who reads SciFi should make sure to read him. I honestly tend to read fantasy more than SciFi, but I do appreciate a good SciFi book with a solid story and one that's heavier on the "fi" and less "sci" which can be dull. Thanks!

I read some on your list. There was a Mars trilogy that I enjoyed. It was by Kim Stanley Robinson. Do you know these?
debby236 at gmail dot com

Anathem is one of my all-time favourite science fiction novels. The world building in it was incredible, and I loved the way it ended.

Have you ever read "The Gate to Women's Country" by Sheri S. Tepper? It's another favourite of mine, but it doesn't seem to be particularly well known these days. Like "Anathem," it's post-apocalyptic, except that it's set generations after our society crumbled. The society that came to replace it was like nothing I've ever read about.

Thanks for playing! I'm very familiar with the first two books (and the last!) on your list..the others, not so much. Will definitely be adding them to my TBR list. Happy Easter!

can't think of any

Will have to check some of these out. I've never been much for sci-fi, but hey, there's always a first for everything. :-) Great job!
Here's my post: https://wendizwaduk.wordpress.com/2018/04/01/saturday-seven-with-meganslayer-favorite-flawed-characters-on-television-saturday7-longshortreviews/

I can't think of too many. Ender's Shadow by Orson Scott Card was a book that got me into sci-fi.

Oh, man, I was a little disturbed by the idea of 'grokking' (I think that was the term) for a while after reading that Heinlein story. Discovering the female sci-fi writers was inspirational for me...Andre Norton, Marion Zimmer Bradley, CJ Cherryh...but I enjoyed Silverberg, Asimov, and the like and then branched off to the tongue-in-cheek authors like Christopher Stasheff and Robert Asprin.

Sorry I'm late and hope you had a lovely Easter. My post is here:
https://thereadingaddict-elf.blogspot.com/2018/03/saturday-seveneasy-random-acts-of.html

Some of my favorite sci-fi has been written by Andre Norton, Anne McCaffrey, Robert A. Heinlein. Love, Alyna J. Couture

Almost anything by Ursula K. LeGuin is thought-provoking. She has one where the inhabitants of another planet can change their sex at will...become female to have a child, then switch to male for a while, to father a child. They find it horribly confining meeting earthers who are "stuck" in one sex for life.

I love Margaret Atwood's stories, but she needs a better editor. The Handmaid's Tale was good, but "Oryx and Crake" is great! Then the second book in that series, "After the Fall," I think, is so dull I had to force myself to finish it. I got the third one from the library and couldn't put it down the minute I opened the cover...I think I read it in less than 24 hours because I didn't want to stop reading! So to say she's uneven is putting it mildly. But I like to check out female sci-fi writers, since they don't get much respect, generally.

Right now I'm half-way through the second Mira Grant book about tapeworms that started with Parasite. You have to read them in order, but the second is fabulous so far! I just paid $12.99 for the third eBook, and for me that's a first! But I gotta read it after I'm done with the second!

I love sci-fi SO much! But alas, my muse doesn't give me those kinds of stories.