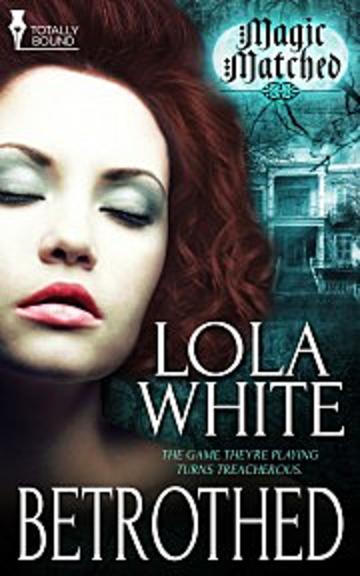 In the witching world, trust is a scarce commodity and love can be a liability. Family comes first. As the witch clans compete for influence, wealth and hereditary magic, marital alliances are determined by politics and strategy, not desire or emotional compatibility.

Ileana Lovasz isn’t looking for love. She’s desperate to marry in order to escape the clutches of her cruel and domineering grandfather, the dictatorial Father of the Lovasz clan. Eliasz Levy’s offer of betrothal can provide the freedom she seeks. She understands his motives have little to do with the heart. He seeks a connection with her magically gifted brother Silviu, who seems likely to be the next head of the inter-clan council.

Ileana’s and Eliasz’s mutual attraction make the match more appealing, but Ileanna isn’t going to let down her guard. She’ll use her amorous skills to seduce him, but the realities of witch politics make her cautious.

As the younger Lovasz son, Silviu will never be the family Father, but that’s not his goal. He has set his sights higher. His meticulously laid plans are progressing well. They depend on his marriage to Georgeanne Davenold, heir to one of the great matriarchal families. Silviu and Georgeanne together will make a formidable team, but they too need to learn mutual trust, especially since their partnership must bridge the gulf between male- and female-led witching society.

Lola White’s Betrothed is a breath of fresh air, full of original ideas. Structurally, it departs from the typical romance formula, with its two equally important couples. The point of view rotates among the two heroines and two heroes, letting the reader get to know each of them, with their varying ambitions, weaknesses and secrets. For the most part, the author manages this complicated narration smoothly.

I loved Ms. White’s portrayal of magic. Just as is the case with other personal attributes, each individual has a differing level of power, which expresses itself in different ways. Eliasz, for instance, has the ability to acquire secret knowledge from the wind, while Ileanna can sense the presence of other people’s magic.

Georgeanne’s magical status is perhaps the most fascinating. Born under a Reap moon, she appears to have no paranormal abilities at all. Her entire life has been an attempt to compensate for her magical deficit with achievements in other fields. However, she’s also immune to magical attacks by others, a characteristic that serves her well in the dangerous and desperate witch society.

The strong feminist themes in Betrothed also pleased me. Ms. White shows clearly the biases that result from being raised in a patriarchal versus a matriarchal family. Georgeanne and Silviu will need to work hard to overcome these almost unconscious preconceptions. Meanwhile, Ileanna has for years hidden the fact that she is as competent and as well-endowed with magic as any Lovasz male. She fights Eliasz’ expectation that he will control her as he would another woman brought up in a male-dominated family.

Most of Betrothed takes place in the Levy family mansion in Poland, where the Lovasz family has been invited to negotiate Ileanna’s betrothal. Davenold family members are also in attendance, including Georgeanne’s treacherous and powerful cousins Christina and Adam. The somewhat oppressive atmosphere, full of double-dealing and private bargains, reminded me a bit of an Agatha Christie novel. As Ileana and Georgeanne are both subjected to repeated magical attacks, the four protagonists try to determine who is responsible.

I will admit that I sometimes lost track of the logical threads during these deliberations. I found myself a bit confused by the many secondary characters and their varying motives. That might have been because I was reading under the influence of jet lag!

All in all, Betrothed is an enjoyable read with some creative twists that set it apart from the typical romance. I recommend it.

(I received a free copy of this book in return for an honest review.)