Anyone who knows me would not be surprised to see animals appearing in my books. In fact, it’s fairly unusual for me not to have a four legged furry friend in their somewhere, and often they play a key part in the story.

The creature featured in Red Skye at Night is Daisy, the stray dog who adopts Harry, and by extension Hope, as they make their way across the Cairngorm mountains in Scotland. Poor Daisy is only a puppy and has been fending for herself. She’s not been doing a great job of it, so when Harry and Hope stop for a picnic and Daisy gets a whiff of a chicken sandwich, and better still a warm dry back seat to curl up on, she’s not letting go.

I don’t describe Daisy in great detail in the story, I prefer to let readers use their imagination. She’s about four months old, brown, thin, probably got some border collie in her. This is the sort of image I had in mind – what a sweetie. I’d have scooped her up too and taken her home like a shot. 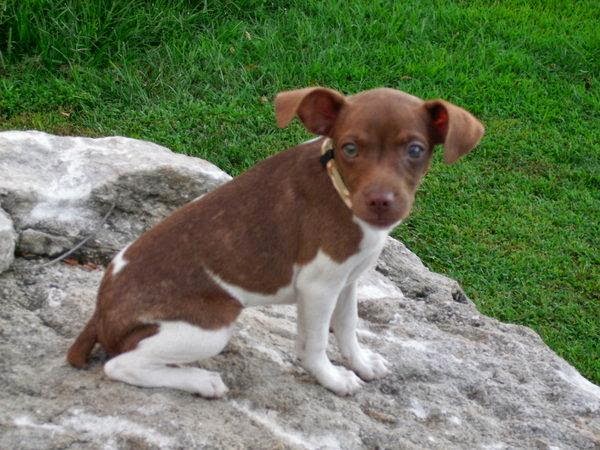 Over the years we’ve had our share of rescue animals, including a Yorkshire terrier I agreed to look after for a couple of days while his owner sorted out her domestic problems. It was June, and I suppose I should have smelled a rat when Toby arrived complete with winter coat. He died of old age some fourteen years later.

Daisy has an important part to play in the story. She symbolises Hope, and more specifically, Harry’s reaction to Hope. Right from the beginning he’s attracted to the sassy taxi driver. Having convinced Hope to drive him to Scotland he decides early on that he’s keeping her. He won’t be going back to Canada without either of his new travelling companions, and although Daisy is an easy sell, he has to use some pretty direct methods to get Hope to finally agree. Harry generally gets his way though.

Despite her unhappy start in life Daisy has landed on her feet. Despite their fondness for chicken sandwiches new family have some odd ways. For example they like to swim in freezing cold rivers and seem to expect her to join in. Not happening. Harry and Hope also seem to spend more time than Daisy can really credit rolling about naked in the Scottish heather. She has new people coming into her life all the time, but she’s a friendly, optimistic little dog, and as long as she’s around Harry she knows she’ll be safe. Hope’s a little less quick to reach the same conclusion, but gets there eventually.

Here’s the blurb for Red Skye at Night:

Two strangers, one outrageous proposal, and the journey of a lifetime.
How far would you go? To Skye and back? 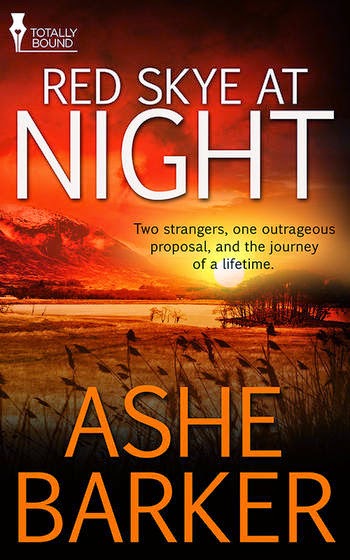 A random accident as a teenager wrecked Hope Shepherd’s aspirations to be an international athlete. Now working as a taxi driver, Hope is unsettled by a sexy Canadian she picks up at the airport. With his good looks and easy charm, he’s just the sort of man she can do without. But can she afford to turn down his offer?

He offers her a small fortune to drive him to Scotland, where he hopes to discover his ancestral roots. And not just anywhere in Scotland. Harry McLeod wants to go to the Highlands, to the Isle of Skye.

He is persistent, and Hope needs the cash. But what are the real terms of this outrageous deal?

When they reach Skye, a feud spanning four generations challenges all that Hope thought she was coming to know about submission. Will it be enough to convince her that this could be a relationship to stand the test of time?

Like the sound of Red Skye at Night? Buy it here.

In my own writing I draw on settings and anecdotes from my own experience to lend colour, detail and realism to my plots and characters. My stories are often set in the north of England where I live but I draw inspiration from all over. An incident here, a chance remark there, a bizarre event or quirky character, any of these can spark a story idea. But ultimately my tales of love, challenge, resilience and compassion are the conjurings of my own lurid and smutty imagination.

On the rare occasions I’m not writing my time is divided between my role as resident taxi driver for my teenage daughter, and caring for a menagerie of dogs, rabbits, tortoises. And most recently a very grumpy cockatiel. I’m a rural parish councillor, and I’m passionate about evolving rural traditions and values to suit twenty first century lifestyles.

I have a pile of story ideas still to work through, and keep thinking of new ones at the most unlikely moments, so you can expect to see a lot more from me.

I love to hear from readers. You can find me on my blog, and I’m on Facebook, and twitter too. And more recently on Tsu

Here’s an excerpt from Red Skye at Night, and what better scene to share than the first encounter between Daisy and her new friends?

Harry holds my jeans for me to step back into them. I rest my hands on his shoulders, leaning on him as he draws the fabric back up my legs, I stand to fasten the zipper and glance back at our remaining picnic.

Except there isn’t any. Nothing remaining. What there is, a few feet from us, its nose stuck in the paper bag that had contained a particularly succulent chicken sandwich, is a small brown and white dog.

Harry turns, sees the dog too. The animal looks up at us, snarling as it backs off.

“How the fuck did that get here?” Harry stands, edging me behind him as the dog’s ears flatten against its skull. The snarls seem to me half-hearted at best, but I prefer not to test that theory.

“Maybe it’ll just go away.” I whisper the words to Harry, hoping he isn’t really thinking of confronting the dog. Despite the snarls and show of canine bravado, it would be an unequal struggle. There’s something incredibly pathetic about the animal, and as we watch I spot a faint, almost indiscernible flick of its tail, a signal of timid, despairing hope.

“He’s scared of us. That’s all.” Harry’s voice is low, the gentle, calming tone I recognise. He crouches, holds out a hand, palm up.

“Be careful.” My voice is hushed but I’m also of the opinion that the dog poses no real threat to us.

Harry edges forward, picking up a stray piece of wholemeal bread from the edge of the picnic blanket. He holds that out to the dog, crooning softly as he waits for the animal to make up its mind. Eventually hunger wins out. The snarling stops as the animal slinks forward, almost on its belly, crawling towards Harry’s outstretched hand. It takes the bread from his fingers, gulps and swallows, then backs off a couple of paces. Harry moves forward, the dog backs away, but only one pace this time. It’s letting him get closer. One lip curls, but there are no further growls. Harry picks up a piece of cheese and holds that out. The dog comes forward more readily, sniffs the food before delicately taking it from him. This time it lies down to eat it.

I watch as Harry reaches for the dog. The animal flinches as he lays his hand on the smooth-haired brown head, but displays no further aggression. Harry scratches its ears, and the dog tilts its head, turning to flick his palm with its tongue. Harry smiles. “Good boy. Friends now?” He strokes the dog more firmly, moving in close to pat the bony flanks. He runs his hand along its ribcage, and instantly the dog rolls onto its back in a posture of total submission.

I know that feeling.

“Ah, good girl. My apologies.” He turns back to me. “She’s thin as a rake. Come here, feel her ribs. Poor little thing.”

I step forward. I’ve never had strong feelings about dogs one way or the other, but have to agree that this specimen seems harmless. I kneel next to Harry and reach out. Sure enough, each individual rib is sharply defined beneath the skin. The animal must have been starving and our unguarded picnic too much of a temptation.

“How do you suppose it, sorry, she, got here? We’re miles from anywhere.”

Harry glances up from his perusal of the dog now shivering under his hands. “A stray? Perhaps she wandered off and her owners left her behind. Maybe she was dumped up here. She doesn’t look to have been doing very well at fending for herself.”

“What are we going to do with her?” Even as I ask the question, I know we won’t be leaving her behind.

“How do you feel about dogs in your taxi?”

“I don’t usually allow them. But I suppose this once…”

Harry turns back to the dog. “So, how about that? You want to come with us then?” The skinny little tail wags, tentative at first, but unmistakable. We’ve made a friend. Well, Harry has, without a doubt. I suspect the jury’s still out on me.

“What are we going to do with her?”

Our canine passenger is curled up on my back seat, where she fell asleep as soon as the car started to move. I’m driving now as Harry consults his map again. I whispered the question to him, almost as though the dog could understand what I was saying.

“I don’t know. She seems kind of sweet, though, now all that snarling has stopped.” He leans around to look at the little brown and white shape huddled on the car blanket.

“We could take her to the police. In Aviemore.”

Harry glances at the back seat. “I suppose. She doesn’t look much like a hardened criminal to me, though.”

“Idiot. The police take in strays. They hand them over to the council, I think. Or maybe a vet…?”

“What then? After the council get them? Oh, and it’s not advisable to refer to your Dom as an idiot. Not when he has a boot full of bondage gear and a raging hard-on.”

The car lurches as I process that last remark. “I did offer, but you wanted to wait. I’m not sure about the council. They keep stray dogs for a while to see if anyone claims them, then if their owners don’t turn up they get re-homed, I suppose—or put to sleep.”

“That seems a bit harsh, just for nicking a chicken sandwich. A vet’s a good idea, though. We should get her checked over, then we can have another think.”

“What’s to think about?” I glance sharply at him. “We can’t keep her. I live in a tiny bedsit in Leeds, and you’re going back to Canada in a few days.”

“True. Let’s see what the vet has to say first.” He closes his map and reaches for the glove box. He pulls out his iPad and starts tapping.

“Are you consulting the local tourist board again? Looking for dog-friendly hotels?” I’m joking, but Harry smiles at me serenely.

There’s a faint snoring from the back seat as our passenger settles in.

I shake my head, resigned, and apply my attention to the road in front.

Enter Totally Bound’s February blog competition for a chance to win an eBook of your choice! 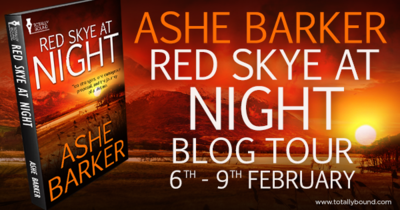 Sounds like a good book. Can't wait to read it.