Elite Metal – Book One in the Elite Warriors Series 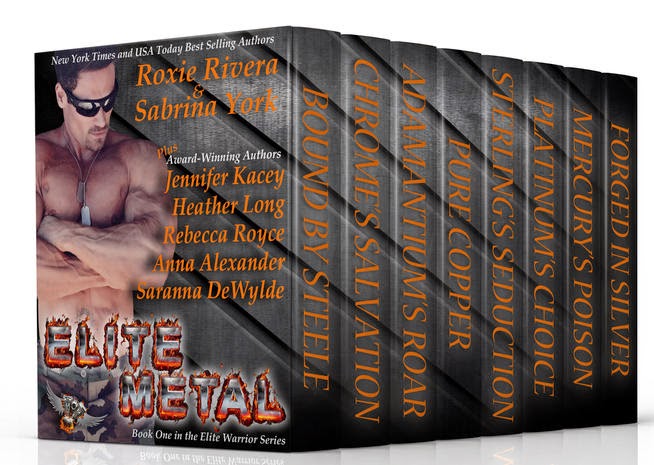 For decades the US Marines funded a top-secret unit known as Elite Recon. A deadly group of men and women sent to infiltrate dozens of countries completely undetected. Mission objectives so extreme casualties were not only probable, but expected.


The current batch of operatives had returned from hundreds of assignments unscathed…until one mission went horribly wrong.

Several men lost their lives and the group disbanded. The remaining leathernecks were scattered in the wind with new identities. They were told to blend in. Be normal. Or face being forever silenced just like their fallen brothers.

Now, two years later, each living member of the group is kidnapped and given a chance to make things right. But this time they’re no longer under the thumb of Uncle Sam. A mysterious private backer who knows about their past has brought them back together. No longer are they forced to turn a blind eye to the lost and forsaken.

When Sterling spots a reporter masquerading as a waitress in a dingy bar in Deep Ellum, he suspects she’s investigating the team. And that’s something he just cannot allow to happen. Too many lives are at stake. He will do everything in his power to learn the truth—even seduce her. And to stop her story from coming out? He might even tie her to the bed. 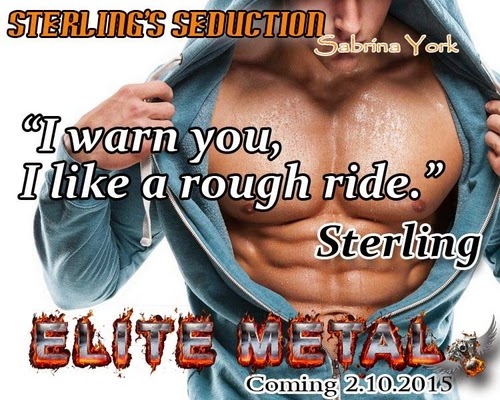 As she rounded the corner, her steps stalled.

Because there he was, leaning against his bike. Waiting for her.
Well, she hoped he was waiting for her. When he saw her, he unfolded his long legs and stood.

“Did you change your mind?” she asked, trying for a flippant tone.

His beautiful eyebrow arched. “About what?”

He gestured to his bike. “My alternator is shot. I’m waiting for a ride.”

“Ah.” Why disappointment flooded her was a mystery. Or not.

“Was there…an offer on the table?” His voice was a low melody that danced on the skeins of air. It was annoying. And not.

“Hey. I’m not the one who walked away.” She tried not to let her petulance show.

He stepped closer and searched her face. She let him. Not hiding at all. Or not hiding everything. She let her interest show.

“Let’s get one thing straight, Pigtails—”

“Yeah. Pigtails.” He flicked her hair, reminding her how she’d pulled it up. She’d been going for backwoods innocent, but it might have backfired on her. With a harsh movement, she yanked out the rubber bands and her hair fell around her face. His lashes flickered. Something that looked like hunger washed over his features.

“What do you want to get straight?”

His jaw clenched. “I don’t like questions. Pure and simple.
Understood?”

The way he said the word, with a thread of dominance in his tone, sent a shiver through her. She lowered her eyes and nodded.

“Understood. So…do you? Want to come home with me? No questions asked?”

“Maybe.” He checked his watch. “Looks like my ride isn’t going to show, anyway.”

Hardly the flood of interest she would have preferred. Irritation rippled. “Or I can give you a lift home.” And when his cheek bunched,
“Or call you a cab.”

“I’d rather go home with you.” He stepped closer, too close, and pulled her against him. His fingers were harsh on her flesh, his insistence alluring. Yes, this was what she wanted. Something rough. Something ruthless. Something demanding.

Hunger rose in her, swamping her desire to finish this story and get back home. Hell, she could probe him with questions later. After. This need was far more pressing.

When he lowered his head, she caught a whiff of his aftershave and her knees locked. He was tall, muscled and rough around the edges. Just the kind of guy she’d always craved.

His lips touched hers and she nearly collapsed. It was a wild rush, a tumult of sensation. For a starved woman, as she was, it was irresistible. She couldn’t help but kiss him back, a manic frenzy. Her passion seemed to spur his on, and he wrapped himself around her, tipped his head and deepened the kiss. His hands roved over her back, her hips, her ass. Nothing tentative. Nothing tender.

When he lifted his head, she was a bowl of Jell-O. Ready and willing.

“So do you want to?” Her voice caught on the invitation.

“Yeah.” He yanked her tighter and his cock gouged into her belly, hard and needy. “Yeah. I want to. Just no more questions.”

To save his Marine brothers and sister he must accept the past isn’t dead and buried.

Reuniting survivors means he is forced to first forgive…the enemy.

A former leader of Elite Recon, reduced to nothing more than an apathetic existence.

Until his girl’s life hangs in the balance…now nothing will stand in the way of him coming back to life.

Adamantium left Beth to what he thought was a better life, only to find she had been living in hell. Now he’ll do anything, break any vow, to claim her as his for all time.

Copper will do whatever it takes to get the job done, even if it means seducing and betraying the one man who really sees her.

When a snoopy reporter threatens the Elite Metal, Sterling will do whatever it takes to kill her story about the team. Even if it means he has to tie her to his bed.

Platinum left the life he had with Rose in New York to rejoin his team and silence the nightmares from Operation Phoenix.   But when Rose is forced to go on the run with Platinum’s hidden son, he will have no choice but to return to his old life and reclaim what he has ached for every day since. Red Wolf’s sniper wants to nudge Plat’s underbelly and they’re going to find out quickly how deadly he can be.

A scarred, mad genius more monster than man must protect the beauty he's become obsessed with from a beast more terrible than himself.

After surviving the double-cross during Operation Phoenix, Former Elite Recon Marine Silver embraces the underworld and builds a new life as one of the world's most renowned thieves. Jewels, paintings, corporate espionage--there's no job he won't take for the right price.

<3 Thank you so much for sharing!

I don't know how you do it! Every single excerpt of yours that I read has me drooling.

Good luck with the collection.