Congratulations to Jen, the winner in last week’s giveaway. I’ll be sending her an autographed print copy of Raw Silk. 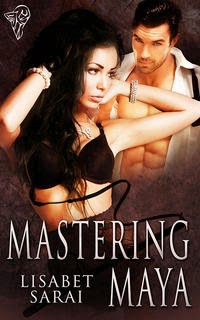 Mistress Maya bears the nickname "The Ice Queen". Her precision in
administering discipline, her skill in evoking a submissive's devotion, and her unshakable self-control are legendary in the small but active Boston kink community.

From the moment newcomer Dom Shark sees Maya flogging a sub at Club Inferno, he's obsessed with her beauty and power. He'd determined to break through her defenses and bring her the same release she grants to the lucky slaves she tops. When Maya dismisses Shark as young and inexperienced, he offers her a challenge: a night together, during which he'll show her what it means to be mastered. If he fails to bring her to new heights of sensation, he agrees to become her slave.

When you’re done with my snog, head over to Victoria’s for more Sunday kisses!

She’d expected leather, a motorcycle jacket and chaps, perhaps, or well-worn denim. Instead he wore a tuxedo, which fit his lean, muscular body like it had been custom tailored. His dark hair was slicked back from his brow and there was no sign of the bad-boy stubble he’d been sporting the night they’d met. Despite the cutting autumn wind, he was coatless.

“Mistress Maya.” Her name, her title, in that deep, rough voice, melted her resistance. “May I come in?”

“Please do, Master Shark.” She stood aside so that he could enter, but he paused, drinking her in with his eyes. When he raised his hand to her throat, Maya cringed despite herself. He laid a single chilly finger on the pulse point below her jaw, reading her unwilling excitement in its race. For a dozen breaths, he held her there, transfixed, as warmth seeped from her skin to his. Then he traced a line down her neck to where the caftan revealed her cleavage—but no further. Her nipples peaked into aching knots nevertheless.

“You look lovely, as always.”

“Thank you.” His formality confused her. The emails they’d exchanged since the Friday munch had been casual and arch, filled with sarcasm and double entendres. Stephen had suggested they handle negotiations in advance, in order to avoid breaking the mood of their encounter. Now he knew the few limits she’d been willing to identify—no gags, no choking, no unprotected penetration—and the safe word she’d chosen.

Maya led the way to her parlour, with her visitor trailing behind. His eyes wandered down her back, over the swell of her buttocks—she felt the weight of his gaze, though he never touched her. Lubrication welled from her pussy and trickled down the insides of her thighs. She wore nothing under the caftan, as he had instructed.

“Stop.” She halted as suddenly as if he’d tugged on a leash. Behind her, he gathered her heavy tresses in one hand, drawing them aside to bare her neck. Chill air touched the normally protected skin, then warmth and wetness. The kiss he planted at her nape sent shivers of pleasure racing to her pussy. His other hand gripped her upper arm—the strength of that grip making her gasp—while he licked along the curve running from her hairline to her shoulder. She closed her eyes, allowing herself to bask in the sensation of liquid heat.

He pushed her loose garment off her shoulder. Was he starting so soon? Then she yelped as he sank his teeth into her deltoid.

“What the fuck?” She whirled to face him. “That hurt!”

The bite throbbed in a way that wasn’t entirely unpleasant. Her clit seemed to pulse in time. “Yes, yes. I’m sorry, you startled me.” In her flats, she was six inches shorter than he. She gazed up at his face, trying to read him. The dangerous gleam she saw in his eyes sent new shivers dancing through her.

“And have you changed your mind?”

“No…?” He waited, clearly expectant, leaving her momentarily disoriented.

“No, I haven’t changed my mind.” She tried to move into the parlour, but he held her fast.

“Huh? What?” Light dawned. He was waiting for her to acknowledge his dominance. Could she do it? It had been so very long. She could barely choke out the words.

A torrent of long-denied emotion came rushing back—the delicious helplessness that came with accepting a Master. She fought against the flood, but it was too powerful, too deep. She squeezed her eyes shut to hold back the tears. He mustn’t see—mustn’t know how much that one word had cost her.

He cupped her cheek with his palm. “Are you all right, Maya? Do you want to call this off?”

He stroked her hair back from her forehead. “It’s okay. I understand, pet.”

Pet? Who did he think he was? He didn’t know her! She tried to focus her anger, to generate some cutting retort, but now his mouth claimed hers, and it was so marvellous she couldn’t muster the energy to fight.

Stephen sealed his firm, mobile lips to hers. His tongue poked and probed, testing her willingness to fulfil her promise of submission. She opened to his determined assault, not because she’d agreed to but because she wanted more of his sweet heat. He tasted like fresh mint, clean and sharp. His aftershave—the same scent she’d noticed in the café—somehow reminded her of summer afternoons, sun-baked grass with a hint of honey.

The kiss deepened. He snaked his arms around her, tight as the bonds he’d promised and impossibly strong. He gripped her ass, digging his fingers through the velvet and forcing her body against his. His cock was a lump of stone pressing into her belly. A hungry gulf ached between her thighs, dripping with need. The satin of his tuxedo jacket was smooth and cool under her palms as she held on to him for dear life.

He wasn’t rough, brutal or even demanding, but the ravishing kiss made his point clear. He was the one in charge.

Posted by Lisabet Sarai at 3:11 AM