Good morning. Kryssie Fortune here. Lisabet’s let me loose on her blog. Right now, I’m in the Hereditary Lykae King’s palace. I’d blagged an interview with the heroes from the first two books of my Scattered Siblings series, To Wed a Werewolf, and Curse of the Fae King. I thought I’d do a formal Q and A, what with them being Kings, only before I got started, they showed their true colors. This is what happened.

Caleb the Cold rules the Lykae packs with a firm hand, and until he met Sylvie, he earned himself the soubriquet, the Cold. Believe me ladies, the Lykae king is hot.
Then there’s Leonidas, King of the Fae. Dark haired, tall and broad chested, the Fae King’s definitely not the Tinkerbell type. Even his muscles have muscles. I’m so going to enjoy this interview.

King Leonidas spotted me first, and crossed the great hall to greet me. He even kissed my hand. His Charmed to meet you, made my heart race. Then again, King Caleb makes my breath catch in my throat. The blond warrior king matches Leonidas muscle for muscle, but he lacks his practiced charm.

There’s no formality in this castle. Caleb wandered over, rolled his eyes and said, “Hi. Ignore Leo’s attempts to flirt. He just can’t help himself.”“

Leonidas’ eyes narrowed. “At least I don’t have to kidnap a woman to get her into my bed.

Caleb let his fingernails extend into claws. “Unlike you who just locked yourself in a tower, turned feral, and let your chamberlain pimp for you. I still don’t understand what that rainbow-haired witch saw in you.”

Leonidas’ voice deepened. Hell, it came from his boots, rumbled around his chest, then rolled like thunder through the great hall. “I could say the same about my little sister, but at least she had the wits to defeat the People’s Defense League. Apparently, she’s both the beauty and the brains in your relationship.”

Apparently, these two argue like this all the time, but I’m pretty sure there’s good humor beneath it. At least I hope so. Time to remind them where we are I think. “Are you ready for your interview, gentlemen?”

At least they both grinned, but that sheepish look didn’t sit easily on their shoulders. Just then, the door opened, and Joel Blackheart, Grand Marshall of the Lykae Forces, slipped into the room. Good grief, I wondered when I saw him, does every Lykae come in shades of gorgeous? The exalted company didn’t bother him—maybe because he had a smidgen of royal blood himself.

Joel sighed and shook his head. “That war dragon of King Leo’s caused chaos in the courtyard. He tried to force his huge bulk into the kitchen. The chef had hysterics.”
Leonidas chuckled—a sound so sexy breath caught in my throat. His eyes twinkled, and he got a soppy, I-love-my-true mate look on his face. “Meena will sort it.”

Joel grinned, and if there’s been a thermometer close by mercury would have burst out the glass. “She already did. Now your prize war dragon’s laid with his head’s on his paws, and his tail curled around his body. He’s a picture of misery with his hangdog eyes and nobody-ever-feeds-me expression. Even the cook felt sorry for him. He ordered the porters to bring trays of food from the kitchen.”

Joel sensed the testosterone flowing from the respective kings, and moved to Caleb’s side.

Leonidas turned haughty. “I’m just pointing out my half sister has a bad case of Stockholm Syndrome. Why else would she marry someone like your king?”
Caleb growled and bared his fangs. Fur grew on his arms. Then two women strolled in, arm in arm. One smiled shyly as she moved to King Caleb’s side. He swept her into his arms, and moved in for a kiss that went on so long I thought they’d suffocate. Just watching it made my temperature rise.

The other woman—the one with a mass of rainbow curls—rushed into Leonidas’ open arms. He swung her round, then buried one hand in her hair, and tugged her lips to his. She ran her foot up and down the back of his calf. Finally she lifted her head. “Leo, I heard what you said. Play nice.”
Joel Blackheart stared out the window, then up at the ceiling. I half expected him to put his hands in his pockets and whistle. “Too much public pawing. Can’t you save it until you get to the bedroom.”

“I don’t want to,” Joel shot back. “I won’t let some woman wind me around her little finger.”

Leonidas looked down at his queen, his heart in his eyes. “There’s nothing I wouldn’t do for my Meena. I hope your true mate makes you crazy.”

Joel shook his head. “I’m immune to all that true mate nonsense. Sure, you two have found women who make you happy, but I’ve agreed to an arranged marriage that allies us with another pack. In three weeks I leave the Lykae army, return to Rackutta, and take over as alpha of the Tundra-Tough pack. After that, I’ll meet my fiancée.”

Meena, the Fae Queen, turned to her sister-in-law Sylvie. “I hope those words don’t come back to haunt me.”

I thought you’d like a real life insight into the relationship between King Caleb and King Leonidas, but on rereading this, it says more about Joel Blackheart. You can read his story in To Mate a Werewolf, but it’s not due out until the end of November.

Meanwhile, here’s the blurb and an excert from the first of my Scattered Siblings series, To Wed A Werewolf. 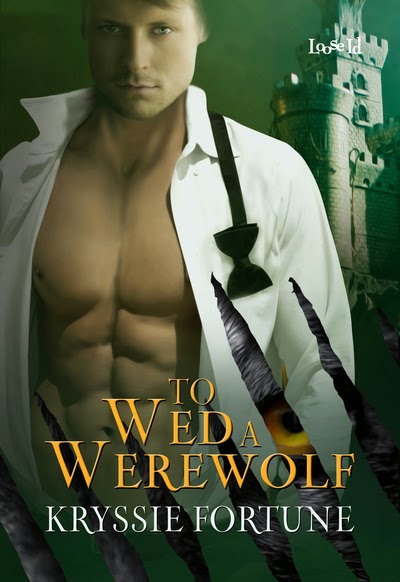 Blurb for To Wed a Werewolf

Sylvie's more human librarian than half-blood Fae princess and she definitely prefers books to men. Then, she learns her unwanted Lykae fiancée is marrying someone else. If she doesn't stop the wedding, the Fae will resume the border war with the Werewolf nation. A high-handed Lykae security guard blocks her every move, and when her plans go awry, she's kidnapped, stripped, and bound for his pleasure.

Caleb the Cold, King of the Lykae, will do anything to make his younger brother's wedding special--even pretend he's a security guard and kidnap his brother's former fiancée. Punishing her is pure pleasure, until he realizes she's his mate. Now he needs to woo the woman he's tormented to the edge of madness, but is it too late to claim her heart, and make her his?

“I told you”—a huge hand landed on each of Sylvie’s shoulders—“you’re not welcome here.”

The damn security guard had already turned her away twice, but he definitely looked good in a tux. She could get a neck ache staring up at his towering wall of muscle and menace, but she liked the way his blond hair curled over his collar. His broad shoulders and long, lean physique made her heart beat a machine-gun rhythm, but his clear gray eyes narrowed when he realized she’d sneaked back again.

Although her breasts perked up and demanded his attention, the attraction certainly wasn’t mutual. Maybe she shouldn’t have crept in with the caterers, but he’d left her no choice. Why did he have to be huge, imposing, and so sexy he made her mouth water? Damn it, she was lusting after another Lykae, and people’s lives were at stake here.

Desperate to speak to the bride or groom, she grabbed a tray of drinks from a side table and slammed it into his stomach. Wine splattered the walls. Glasses shattered as they crashed onto the marble floor. The Lykae growled in annoyance, but the tray bounced off him like it had hit a brick wall.

“Violent little thing, aren’t you?” He never flinched. “But I’m definitely up for the fight.”

He stalked toward her, his eyes—dirty ice diamonds—condemned her, and she quickly dropped her gaze.

Great! Now I’m staring at his dick. But it’s definitely worth a second look.

His brows drew together in a frown so fierce her courage shriveled inside her. Arms wrapped around her chest, she backed off, but there was nowhere to run, nowhere to hide.

“Hey, lady,” one of the caterers called, “get back in the dining room and finish setting up your tables.”

“She’s fired,” the security guard snarled. “And step up your security, or your firm won’t work here again.”

His clenched jaw and angry glower sent the caterer running. That left Sylvie trapped and alone with a furious Lykae. God, what if he turned? Would he rip out her throat? So scared she could hardly breathe, she stared anywhere except at him; then he stepped closer and invaded her personal space. One swift, graceful move and she hung over his shoulder like captured prey. An inch or so lower and she could bite his spectacular butt. When he flashed them into the otherworld, she struggled not to barf all over it.

The transition always made her stomach churn. Once her nausea settled, she screamed the high-pitched shriek only a fairy in distress could manage.

“That”—he stroked one hand over her bottom as she squirmed and kicked—“hurt my ears.”

“Good,” she snapped, and screamed again.
Whack! The gentle pressure became a full-on slap that made her bottom burn.

“Be quiet or I’ll spank you again. The wedding’s in two hours, and I don’t have time to deal with a troublesome bitch like you.”

God, that slap made her ass throb—and there he went insulting her again. What was it that attracted her to arrogant Lykae men? And why did they treat her as a second-class citizen? Story of her life, really.

Even her Fae father had walked away and left her human mother to work two jobs to keep Sylvie clothed and fed. Then the day she turned seventeen, her half brother had arrived on her doorstep and told her she was a Fae princess. She’d told him to get real, but he had been. He introduced her to the otherworld—a place so beautiful it made her gasp, but so violent it scared her witless. Ever since, she’d dreamed of someone strong and special, someone who’d always put her first.

“You don’t understand.” She beat her fists on Mr. Arrogance’s back. “I have to speak to Giles.”

“I just bet you do, but news flash, sweetness, you have to get past me first.” He shoved her into a bare room, empty but for a cast-iron bed. “Don’t worry, princess. I promise we’ll play later.”

She tried to dodge around him, but he moved with Lykae swiftness, blocking her way and looking her over like she was a fine meal.

What the hell happens if he bites me? Will I turn all wolfy too?

He backed her against the wall, placed one hand on either side of her shoulders, and leaned in closer. His woodland-fresh essence hit her; then his gaze focused on her lips. He pressed his body against her, and she suddenly understood the expression “hung like a stallion.”

His grin was all predatory wolf and playful masculinity. Her body tensed with excitement. Anticipation made her breath catch as he lowered his mouth toward hers. Eyes wide, heart racing, she parted her lips for his kiss. Then he spun her around, shoved her, aching breasts first, against the wall, and locked one arm around her neck in a sleeper hold.

Damn it, she thought just before she lost consciousness. What do I need to do to get a Lykae to kiss me?

Welcome to Beyond Romance! This series sounds like great fun. I love pushy heroines.

Oooh I like what I see! Thanks for sharing!

Thanks Colleen. You've made my day.
Kryssie
--xx--