The Beauty of Thought

Anyone picking up A Weekend Unbound will probably notice two things: the amount of kinky scenes and the many moments of self-reflection by both Dominant Derek and his submissive lover Tyler. The lovers can’t seem to stop thinking about why they do what they do, how they prepare mentally and so on…

Some might interpret this as a way of A. Moore and yours truly to make absolutely clear this isn’t about abuse, but about a loving relationship with a bit of extra. Why not simply let them do all those hot and kinky stuff? Do readers always have to be reminded of Safe, Sane and Consensual between a spanking and a good hard fuck? 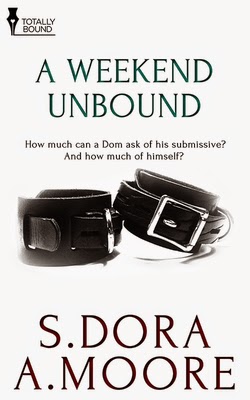 The interpretation is very understandable, and we certainly don’t mind this reading. After all, a story with a clear message about certain rules and safety never hurt the adventurous couple. But more than that the motivation for all those thoughts meandering through the playroom scenes, is the pure pleasure of creating characters who sometimes doubt and are nervous and wonder if this is too much or not enough. Rituals have meaning for the characters and are not just to show the writers’ awareness of the Safe Sane Consensual concept.

His fingers caressed leather, silicone and metal. He shivered when he realized how beautifully Tyler would suffer, how full of joy his eyes were going to be when Sir awarded him with another special treat. But there would be no release, no matter how well he behaved.

He smiled at the sight of the spanking horse. A fine investment, and he was already imagining his subby bound and gagged and waiting until Sir was good enough to pay attention to him.

Blurb for A Weekend Unbound
How much can a Dom ask of his submissive? And how much of himself?

For Derek and Tyler, Dominance and submission have been part of their love right from the first hello. But now Derek wants his submissive to go as deep as he is physically and emotionally able to. During two days and two nights, there are no safety words and very few limits. This is their chance to demonstrate their love for one another through the most extreme scenes they’ve ever played.

There is, however, one rule to trump all others for Tyler—to protect Sir’s most loved possession, even if it means disobedience or going against his own need to submit to his Master without question or complaint.

This weekend will open up levels of their relationship they’ve never dreamed of before.

Like the sound of A Weekend Unbound? Buy it here

S. Dora is the me writing m/m erotica, though I can imagine a m/f or f/f story might suddenly decide they want to get written too, somewhere in the future. The real me is also writing: novels and stories that don't revolve around the down and dirty. And the non-writing me? Is it interesting to know I'm a woman, born in 1961? That my wife and I celebrate our 30th anniversary in October 2011? That we have two sons and five cats and live near Rotterdam? That I had a novel published in Dutch? And one in English? That Dora is because of the little mechanical typewriter I bought with money earned with my very first summer job? That I studied social history and done all kinds of jobs? I guess it actually is, if only because every story ever told is important to at least one reader.

I have been reading gay erotica for over 15 years now and I’ve been writing it for a little under ten years. I’ve always had an interest in Dominance and submission, and my writing reflects how my thinking about the scene has evolved. I live in the southern United States, an area not incredibly open to alternative lifestyles, and the internet has been my salvation. I spent about six months working on a website, designing tease and denial games, and it is still one of my biggest kinks.

COMPETITION TIME: S. Dora and A. Moore are also running a competition for the chance to win a $50 gift card of choice. If you are interested please comment below with your reaction to this blog along with your email! If you feel more comfortable not commenting here, please email S. directly at authordora@hotmail.com. The winner will be generated by random.org at the end of the tour.
Posted by Lisabet Sarai at 3:00 AM

Wow!! I'm totally drooling!! Thank you for this post and terrific giveaway.
babybarlow78@gmail.com

And thanks for giving my readers a chance to win!

Thanks so much for your generosity. It's always a pleasure to visit your blog.

It sounds very intense, but I am curious!

congrats on the new release!!! Thanks for sharing :)
efender1(at)gmail

Loved the taste thank you. Looking forward to reading more.

Loved, Loved, Loved this. Nothing like a god strong dominant man and his sub. I haven't read this yet but after getting this little taste I'm definitely getting this. Thanks for sharing.
amybowens34@yahoo.com

Nice to see you around blogville. I am enjoying the various posts.
debby236 at gmail dot com

Thank you for the little teaser. It sounds like something I could probably get into.
humhumbum AT yahoo DOT com

Thank you so much for sharing this steamy excerpt with us. I have loved m/m - D/s books for quite awhile now and am always on the lookout for new authors who color outside the lines. I have often wondered why some authors feel that they have to write the words safe, sane and consensual before every scene that is played out in their book, as if without them we the reader may think less of them. Congratulations on your new book and I'm going to go to Totally Bound and pick up my copy. laurah2727@yahoo.com

Sounds like a very good book. The excerpt was intense. I can't wait to read this and see what happens where you left off. Congrats on the release.
haleymiller354@yahoo.com

Interesting blurb
When does the contest end?

Sounds like a great read. Thanks for the giveaway.
turtle6422 at gmail dot com