Another Regency Romp from Cerise DeLand

Everyone loves Cinderella story. Why not have one with a mystery about why and how such a lovely woman is so impoverished and treated so badly by her relatives?

Cerise DeLand does it for you in Rendezvous with a Duke, the second in her Regency Romps series. (The first is Lady Varney’s Risque Business.)

Anna Fournier never intended to fall in love. Not with any man. Especially not a duke. But Hugh Lattimer persists in courting her despite the scandal that surrounds her—and the innuendo that could ruin him.

Can she escape her past and embrace a future as Hugh's duchess? Or will the man who murdered her father ruin her future once and for all?

Of Course you do!

Hugh whirled to face his coachman, the wind biting into his hope that Anna would venture out to meet him on such a bitter day.

The man huddled in his woolen livery, frozen, rubbing his hands together.
“We hired the man’s hack for two hours. But the horses are very cold standing as they are, Your Grace. Can I not make a circle of the garden to stir their blood a bit?”

“Yes, do.” He could not keep his good servant out in such hideous weather.

That was unkind. Unnecessary. 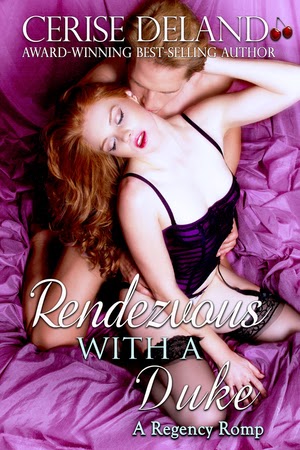 He stared down the lane again, narrowing his eyes.

There! Coming toward him. It was she in that horrible brown hat and coat.

He strode toward her. Then broke into a jog. His hat bobbed and he whipped
it off, tucked it under his arm. “Anna!”

She broke into a smile, beaming at him, her pace quickening, her lips tremulous with what? Cold? Fear? Delight?

He caught her to him. The thrilling feel of her, her curves to his form, her warmth to his welcome. His lips went to the corner of her eye, the point of her nose and hovered over her lips.

“You waited,” she breathed, her words laced with panic, her golden gaze flowing over him with triumph.

She cupped his jaw. “I apologize for being late. I could not get away.”

“A hack. And then, I left him at the bridge and walked.”

Hugh enveloped her in his arms. “There is no one here to see you or me. It’s too damn cold.”

She chuckled, her arms wrapping around his waist as easily as if she belonged to him and he to her. She trained her eyes on his breastplate and ribbons. “But you wore a uniform.”

“I did. As you commanded.” He turned to one side and wove her arm through his. “Come, let me get you into a carriage.”

“You’re frozen. So am I. And there beyond,” he said nodding toward Warren who stood with the hack door open, “is my coachman. I hired a vehicle. Did not bring my own.”

“You have crests on yours, I suppose,” she said, sounding tentative but walking briskly with him anyway.

“Yes, they all do. I would not chance discovery.”

“I do appreciate that.”

They stopped in front of the hack’s open door.

Hugh took both her gloved hands, her fingers cold as icicles. “Few seem to be in the Gardens. I’ll take you if wish. Or you can step into my conveyance, hired especially for this afternoon, and warm yourself with the bricks and the brandy I have tucked inside.”

Her eyes, alive with yearning, examined his. Still she hesitated. “I don’t want to walk.”

He understood her tentative tone, an objection to the privacy of his coach. “I would never hurt you. If you will do me the honor to climb up in there, we might have an hour or more of good conversation.”

“And brandy,” she added with a twinkle in her brilliant eyes.

She swallowed, then smiled at Warren with a hint of apology.

Hugh told her, “You can sit in one corner and I in the opposite seat.”

Acceptance defined her exquisite features. “And here I had imagined us sitting side by side as we did at dinner last night.”

If he had envisioned himself as a cave man seizing her, enjoying her, it was nothing to the urge now to grasp her in his arms and take her lips, her heart, her mind and make them his. Reason, somehow, arrested him instead. “Sit wherever you like, my darling. I live to make you smile.”
She flowed up to him. Her gloved hands cupping his jaw, she rose on her toes and brushed her lips on his.

She undid him. All his noble intentions gone. His earnest statements that he would protect her from his baser urges now hollow. Still, he could not move, paralyzed with wanting more of her.

“You must climb in first,” she told him, an impish glimmer in her eyes. “The better to give me a choice.”

He grunted, incapable of words. Then he did as she bade him. Falling back against the far corner of the wooden bench, he shoved his shako to the floor.
He watched her as she put one foot upon the block and let Warren take her
hand to lead her up inside. And there before him, she met his gaze and waited as Warren shut the coach door. She seemed cast in bronze, unmoving, studying him. Then putting one knee to his bench, she leaned over him, descending to a breath away. “Kiss me, won’t you, Kendal? I’ve dreamed of no one but you for months.” 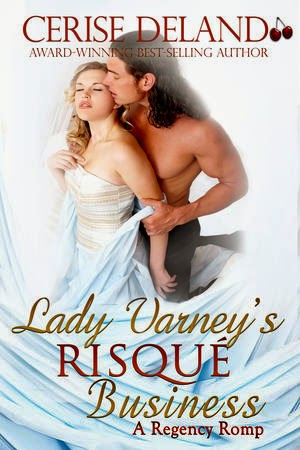 I do love your stuff! Thanks for being my guest.