My Favorite Places to Write

Thanks so much for welcoming me onto your blog today, Lisabet!

When I was younger, I never appreciated living in the place where I grew up. Coming from a small village in Wales which is surrounded by mountains always seemed boring to me. I craved the excitement of big towns and cities ― the sights and smells, the noise and traffic ― the people. But as I’ve got older, I’ve begun to appreciate it more and more. I see the beauty now where I never did before. Lots of writers talk about the places where they write or where they’d love to write. It’s surprising how many authors say they’d like to be able to look out to a view of the hills. When I read an author discussing that dream location now, I realise how lucky I am. Wales is a beautiful country. It’s lush and green with an abundance of mountains and forestry. If you’ve never visited, it really is worth a visit.

At home I write from an upstairs bedroom that has a window looking out at the type of vista I’m sure most authors would envy and I’m grateful for every second I spend in front of it. Would I want to write in any other location? Of course I would. There’s nothing quite like change and variety to get the creative juices flowing. At least once or twice a week I try to get out to write. I go to coffee shops, to hotel bars, to quiet little country pubs.

I live close to the coast and several times I’ve parked up in front of the beach and worked on a novel while looking out to sea. I did this while working on my current release, A Merman in Miami. Because the novel focuses on the merpeople’s secret underwater realm, I found it beneficial to write whole chunks of the book while looking out to sea, imagining their realm somewhere below the surface. The two previous books were based in Texas and oh how I would have loved writing the books while visiting the state and soaking up the atmosphere.

There are many places I’d love to write. A cafe in Rome or Paris would be wonderful, but there’s one thing I know I wouldn’t get in a place like that which I get here in Wales. Peace and quiet. The perfect writing location for me is somewhere with no noise. In an ideal world it would be somewhere with a view of the sea or ocean, but hey, we can’t have everything, right? I know many writers who have to have music playing when they write and even create playlists to go with their books, but personally, I prefer it to be quiet. The background music in pubs distracts me and I even find it difficult to block out the conversations in cafes and coffee shops.

What would your perfect writing location be? Would you like to look out at the sea like me or would the green vista of fields and mountains be more to your taste. Would you prefer to have music playing in the background or would a quiet room be preferable?

Thanks for taking the time to learn a little bit more about me. I hope you’ll enjoy the short excerpt from A Merman in Miami. 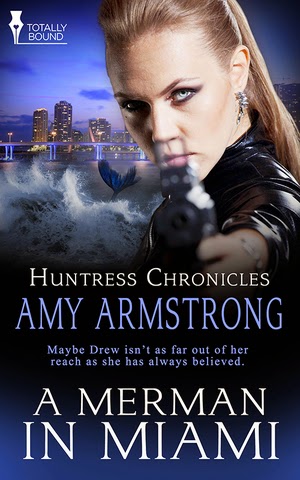 Blurb for A Merman in Miami

Mia Harding has been hunting vampires since she was sixteen years old—almost as long as she’s been in love with her overzealous hunting partner Drew Caine. Unfortunately, the only thing Drew seems passionate about is his job. Tired of longing for someone she can’t have, Mia makes the heart-breaking decision to find a new partner and cut all ties to Drew. But before she can make the request to the council, Mia and Drew are sent to Miami to retrieve one of the lost grimoires. Mia is determined to make it their last mission together—but first they have to survive it.

Drawn to the dark magic of the book, vampires and warlocks begin congregating in the city adding extra pressure to an already difficult mission. When the marine biologist thought to be in possession of the book turns up dead, the trail leads to the highly secretive merpeople. Entering their underwater realm will be problematic, but getting back out will be nearly impossible, especially when the merman king decides he wants Mia as his queen. Lonely and unhappy, Mia at first warms to the advances and the magnetic allure of the king, but maybe Drew isn’t as far out of her reach as she has always believed.

Excerpt from A Merman in Miami:

In the ten years since Drew and I had left the training school, we’d never encountered any angels or demons and I had no idea what to expect. Any preconceived notions I’d had, however, disappeared the very second Malaki walked into Drew’s motel room. It might have had something to do with the fact that he was an angel, but I’d expected him to be holy in some way—to be somehow otherworldly or divine.

Malaki looked like the lead singer in a rock band.

He was dressed head to toe in leather and the faded black T-shirt underneath his waistcoat proclaimed that ‘The Screaming Skulls Are The Shit’. He had dyed black hair with neon pink tips that hung down partly obscuring his eyes. They were just visible enough that I could tell he was wearing eyeliner—lots of it. I must have stared at him for a full ten seconds before I remembered to close my mouth. He was handsome and I’d be surprised if he didn’t have his pick of women, but he wasn’t my type—not that I had one. Maybe I wasn’t the best person to judge. I’d been in love with Drew since I was fifteen years old and as a result, I was blinded by him. I barely noticed other men.

If it hadn’t been for the way Malaki was dressed, that preconceived idea of mine would have still gone out of the window when he cast a lascivious eye over every inch of my body.

Drew cleared his throat noisily, and when I switched my gaze to him, he was glaring at the angel.

“Can we get this over with?” he huffed. “Mia and I have got a plane to catch.”

Like the sound of A Merman in Miami? Buy it here! 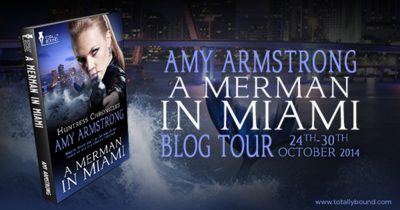 Amy Armstrong is a Brit that loves chocolate, prosecco, and sunshine. She lives and breathes paranormal romance and urban fantasy, but is also a fan of the classics and pretty much anything else she can get her hands on, including but not limited to contemporary romance, thrillers, horror, dark fantasy and young adult fiction.

Amy writes stories filled with heart, heat and passion. She loves to read about strong woman, but believes heroes come in all different shapes and sizes. She is happiest when writing or soaking up the sun with a pina colada in one hand and her kindle in the other. Her family and friends are an important part of her life and she loves meeting new people with similar interests. She is a full time, multi-published author and loves to hear from readers. She writes M/M romance under the pen name Lavinia Lewis.
Posted by Lisabet Sarai at 3:00 AM

Thanks so much for having me as a guest on your blog today, Lisabet!

Wow that blurb caught my attention! Sounds good... I am not a writer, but to relax I enjoy soothing music and looking out at Nature...

Thanks so much for taking the time to read the post, Colleen. That sounds like the perfect way to relax. I find that soothing music is the best accompaniment to a hot bath. I'm glad you like the blurb. I hope you enjoy the book as much should you read it.
Best wishes,
Amy