Up To Some New Tricks

Trying something completely different can be frightening—but it can be fun, too, depending on how you look at it. Going to restaurant for new cuisine you’ve never had, or sky-diving or traveling to a new place. Once we get over any initial concerns, we usually find it’s fun and worth the risk, however small.

For writers, trying something outside of our regular genres can be just as frightening as making a leap out of a plane at 10,000 feet. And if we’re lucky, it’s fun and we don’t end up with a ripcord that’s not working.

I tried a few new things over the years, writing in genres that I don’t feel very comfortable in, even if I enjoy reading them. I wrote a paranormal novella, a sci-fi novella and a fantasy/paranormal. One thing I realized was that when I didn’t put any constraints or expectations on myself, the projects were all fun and offered me a chance to try something completely different. I told myself that no matter how the story came out, it wouldn’t be a failure, because it was all just for fun.

That attitude made all the difference. When I write action/mystery/suspense, my readers have certain expectations, especially in the series books. I feel a constant pressure to give them a story they’ll love. With these little personal projects, I just wanted a story I would love.

And that’s how A Lesser Evil came to be. I had an idea for a character who sells his soul to a demon to get his sight back, because his other alternative is suicide. For this man, a painter who was blinded, life can’t get any worse. But once he regains his sight, he learns there is something else he wants and he might have to give something up to obtain it. I also got to play with the concepts of good and evil, right and wrong and failing to meet a lover’s expectations. Some of the concepts are in my other work, but not the focus of the story, as with this story of Rowan McBride, a demon and his guardian angel, all of whose lives and destinies become intertwined, until their very lives depend upon each other.

I loved the freedom of paranormal fantasy, of making up a world as I go along, but infusing the characters with some familiar characteristics along with their supernatural ones.

Best of all, once it was finished, Total-E-Bound decided they liked my little experiment enough to publish it. I hope you’ll check it out and if you love stories about angels, demons, tormented artists, redefining good and evil and some hot demon sex, this one is right up your alley.

Here’s more about A Lesser Evil and an excerpt: 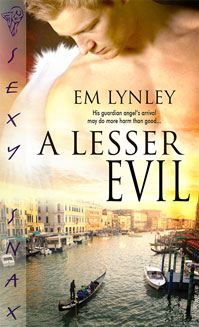 When painter Rowan McCall makes a deal with a demon, his guardian angel's arrival may do more harm than good.

Rowan McCall is about to start a new phase in his painting career with a one-man show at a prestigious San Francisco art gallery. His moment of triumph is snatched away and Rowan’s life changes forever. Left alone and suicidal, Rowan is determined to do anything to get his life back on track. He strikes a deal with an angel who’s all too willing to help him. Then Rowan discovers Tur’el is anything but an angel—he’s a demon. But he’s just desperate enough to go ahead with the bargain.

Zethan,Rowan’s guardian angel, arrives too late. In order to save Rowan’s soul, Zethan makes a deal of his own with Tur’el. With his sight restored and possessed by Tur’el, Rowan searches for Zethan on Earth.

Rowan is obsessed with capturing Zethan’s angelic beauty on canvas. When he meets a mortal who embodies the same beauty, Tur’el and Rowan are overjoyed. But finding Zethan again may prove deadly for all of them.

Antonio sprawled in the chair, one leg thrown over the arm, leaning back, giving Rowan an excellent view of his impressive proportions. Antonio wasn’t fully aroused, just hard enough to give Rowan an idea of the magnitude of the possibilities. And the sight kept Rowan hard enough to inspire more than his artistic side. Later, he told himself and Laz.

Rowan laid down the first broad strokes of the painting, getting a feel for the new canvas and adjusting the pigments as needed for the special air and humidity here in Venice. He studied Antonio and Antonio studied him back, making for a new experience. Rowan had little experience with live models.

After an hour they took a break for Antonio to stretch his limbs and for Rowan to ease the strain in his neck. He remembered how Marshall used to massage him after long painting sessions and longed for the touch of Antonio’s strong, warm fingers. Too much to ask for just yet. Soon.

“Well, you watch me, you study me with your gaze, so intense as if your fingers are touching every inch of my skin.”

“Is that how it feels when I look at you?” Rowan stood up straight and focused his attention on Antonio. “You don’t like this? We can stop for today. Or…” Rowan bit his lip. He forced the words out. “We can stop the project.” No, no, NO! Laz screamed in Rowan’s head.

“That wasn’t what I had in mind.” Antonio’s voice took on a mischievous tone. “I have a better idea.”

“Perhaps you can disrobe as well. Then I have something to entertain me…” Antonio’s voice lilted with promise.

Rowan stepped away from the canvas a few feet as he considered this. It was a dangerous proposition. He already wanted Antonio more than he could bear and them both being naked would be playing with fire. “Of course.” Laz spoke for Rowan and moved to pull Rowan’s shirt off. He was forced to give in, lest he look like a fool unable to control his own body in front of Antonio. “Let me keep my pants and some dignity.”

“No. No pants.” Antonio’s laughter trilled all the way to Rowan’s core. The heat building there told him this was a huge mistake, but he was powerless. He whipped his belt out of the loops—unnecessarily—and slid his pants and boxers down, letting his aching cock swing free.

“How beautiful you are under all those clothes, Rowan. More than I had hoped or expected.” 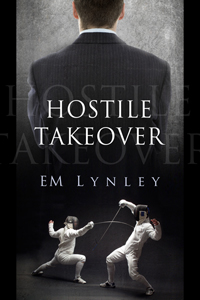 EM Lynley, a Rainbow Award winner and EPPIE finalist, has worked in high finance, high tech, and in the wine industry, though she'd rather be writing hot, romantic man-on-man action. She spent 10 years as an economist and financial analyst, including a year as a White House Staff Economist, but only because all the intern positions were filled. Tired of boring herself and others with dry business reports and articles, her creative muse is back and naughtier than ever. She has lived and worked in London, Tokyo and Washington, D.C., but the San Francisco Bay Area is home for now.

She is the author of Sex, Lies & Wedding Bells, the Precious Gems series from Dreamspinner Press, and the Rewriting History series starring a sexy jewel thief, among others.

Welcome to Beyond Romance, EM!

That is a very hot scene. You really capture the intimacy of between an artist and his model.

Also, I know what you mean about attitude. When I started writing RAJASTHANI MOON, my perspective was, "I'm going to write whatever I feel like without worrying about it." I haven't has so much fun in years, and I think it shows in the final product.

Great post and great excerpt. I'm really intrigued now as to who Laz is in Rowan's head. :)

Great post and a very interesting premise for a story - selling one's soul for the return of sight!!