Hello, everybody. I am Leigh Ellwood, and I thank Lisabet for hosting me today. Lisabet is one of many authors included in the latest Coming Together volume, Girl on Girl, which I have edited. I have contributed work to Coming Together in the past, but this particular work is special to me…naturally because I was responsible for acquiring and editing all the great stories, but there’s more to the story.

Many years ago, I watched an HBO film called If These Walls Could Talk 2. You might have seen it or heard of it – it is an anthology of sorts, as it’s really three short films, all of which are set in the same house over three different time periods. In the first segment, set in the early 1960s, an older lesbian couple has returned home from a movie date when one of them suffers a stroke. The community is unaware that these two women are more than just roommates, and therefore the partner is unable to sit with her love in the hospital. When the woman dies, her partner must deal with losing her companion…and so much more.

It should anger people to know that things like this happen today, in 2013. I see petitions pushed through social media and read e-mails from human rights groups that tell horror stories of same-sex couples separated in medical situations because they are not recognized as married. Can you imagine being told you can’t visit your partner in the hospital, even as they are dying, or having property taken from you because the city or state doesn’t recognize you as a legal guardian or heir? This is why the National Center for Lesbian Rights takes action on behalf of LGBT couples and individuals every day – they help amplify their voices in legal situations where they may be otherwise ignored.

I have donated to causes spearheaded by the NCLR in the past, but I wanted to do more. Coming Together publishes books and shorts designed to benefit a variety of charities, and I proposed an all-lesbian anthology with royalties going to the NCLR. It pleased me greatly when Alessia Brio gave me the thumbs up. The rest is history. 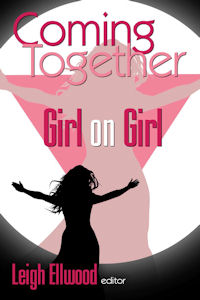 You can buy Coming Together: Girl on Girl at most eBook outlets. Visit http://www.eroticanthology.com/girlongirl.htm for the complete list. The book will be available in print from Smashwords soon.

To give you a quick taste, here’s an excerpt from “A Taste of Vanilla,” my short story from the book. Enjoy!

Hailie knew little about the Bijou Theater, other than it rarely offered the studio blockbuster films. People came here for the limited-run indies and documentaries, and Hailie recalled Thea mentioning once that her college rented out the theater for student film festivals. This afternoon, it appeared she and Cecile had the place to themselves for the late morning showing of a French import, Je t’aime, Veronique. She didn’t recognize any of the names on the poster and wondered what to expect, but realized this beat making awkward conversation for the next two hours.

She could do a movie with Cecile. Why not? It made for a decent first date, and if they decided to extend the day they could return to the coffee shop and discuss the adventures of Veronique. She’d also know how her body would react while sitting close to this lovely woman.

Hailie followed her companion up to the balcony seating, where they took the middle seats in the front row. Here they enjoyed ample legroom and an excellent view of the screen, though Hailie wished more people would join them. She began to crave the intimacy, but when Cecile lifted the arm rest between their seats she gasped out loud.

“These seats are so narrow, you think?” Cecile asked with a grimace. “You’d think only supermodels and children go to the movies nowadays.”

“That’s why I like the Coliseum Mall multi-plex. It’s one step away from sitting in a recliner.” Hailie laughed softly, and settled in to watch a slideshow of advertisements flashing on the screen. Cecile folded her arms in her lap, clearly acknowledging Hailie’s reticence and setting a boundary. Her soft smile, visible in the dimming light, told Hailie of some reluctance to maintain distance and invited her to make the first move.

Hailie chose to believe that, anyway. Her heart softened and her pussy gave a squeeze at the thought of a mere half-hug in the front row while the credits rolled.

The Bijou clearly meant business in terms of punctuality—no previews monopolized their time. Following brief studio introductions, Je t’aime, Veronique opened with a panoramic view of Paris that closed in slowly toward the right, no doubt tracking down the film’s subject.

Cecile leaned close. Sweet vanilla and peppermint exploded around Hailie. “Thanks for coming. I’ve wanted to see this and I hate going to movies alone. Nobody I knew wanted to go.”

Peanuts rolled loudly against thin cardboard. “Just tap me if you want some.”

Cecile rattled the box of peanuts, and Hailie chuckled. “Oh, right,” she said.

The camera finally found Veronique after panning down multiple streets in an area revealed in subtitles as Le Marais. Through an open hotel window they watched a slender woman with long blond hair, nude but for a garter belt and black stockings, writhing on a bed. The next scene revealed another woman partaking of the carnal pleasure.

“Oh, my,” whispered Hailie. Next to her, Cecile snickered, and Hailie couldn’t help the upturn of her lip as she considered Cecile’s eagerness to attend the showing. She understood if Cecile held an interest in foreign cinema—and Hailie had gleaned as much in her e-mail exchanges with the woman—but she had to wonder if this wasn’t a calculated move on the other woman’s part, an arranged meeting near this theater to ensure an indirect, seduction by film.

Hailie watched the onscreen couple embrace and kiss, and swallowed back a catch in her throat. She’d seen her share of love scenes in her favorite soaps and movies, but never two women together, and this looked damn near pornographic by comparison. When Veronique—Hailie assumed she was the blond-haired one—sat back on her heels and slid a hand up the other woman’s thigh, Hailie felt the touch in her heart, then down to her pussy. She knew they were actors, but the emotion appeared genuine, and it certainly moved Hailie.

Veronique edged closer to her lover, pushing out her shadowed pussy to connect with the other woman’s thigh. The camera zeroed in just as their mounds pressed together and began a slow grind. Light moaning and breathing accompanied their rhythmic lovemaking, drawing Hailie deeper into this world of grainy black and white sin.

Something pressed against her knee. Hailie looked down at Cecile’s fingers tracing a circle on Hailie’s slacks.

[Lisabet here! Leave a comment on this post, with your email address. I'll give away a copy of my romantic F/F short Velvet to one person who does!]

Welcome to Beyond Romance, Leigh!

I'm really excited about Girl on Girl. Having seen the table of contents, I know it's going to be a fabulous read.

Thanks for having me today, and thanks for your story!

Sounds fantastic! Thanks for sharing!
efender1(at)gmail(dot)com

It is a wonderful antho! Great post and hot excerpt! ;)