Welcome to my post in our Meet the Billionaires blog hop. The other authors in the Tied to the Billionaire anthology and I want to introduce you to our heroes. And of course we're giving you the chance to win some great prizes at the same time. Specifically, we'll be giving a $50 bookstore gift certificate and a six-pack from our back lists, respectively, to two lucky readers who leave comments during the blog hop.

Anyway, today I'm interviewing Andrew MacIntyre, from my story Challenge to Him. This historical tale is set in early twentieth-century America, the so-called Gilded Age, when rapid industrialization and expansion of the railroads across the land had created immense wealth for so-called “robber barons” like Andrew Carnegie, John Rockefeller, J.P. Morgan, Cornelius Vanderbilt and the like. Andrew is the son and heir of one of these monumentally successful capitalists. He's rich enough to purchase anything he wants. However, money can't buy what he craves most of all. 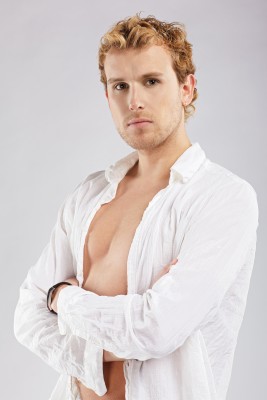 LS: Good evening, Mr. MacIntyre. Or may I call you Andrew?

AM: Andrew would be fine. No reason to be formal. I get enough of that at home – my mother's a stickler for propriety.

LS: Thank you. So how would you describe yourself, Andrew?

LS: Perverse? What do you mean?

AM: Quite simply - I like to tie women up and beat them. Nothing excites me more than the sight leather or rope biting into the soft flesh of a beautiful woman. I love hearing them moan and sigh as I whip their breasts or spank their lovely buttocks. I'm not a sadist, you understand – I'd never seriously hurt anyone – but all my sexual fantasies revolve around such forbidden actions.

LS: With your wealth, though, surely nothing is forbidden. I don't doubt you could buy the time of professionals who'd be willing to endure your bonds and your lash in order to bring your fantasies to life.

AM: I tried that, when I was studying at Yale, but it's very risky for a man in my position. If word should leak to the press about my predilections, my financial dealings and my social position would both suffer. We Americans are descended from the Puritans after all. Officially at least, we frown on anything sexual, but we particularly punish practices viewed as “deviant”.

In any case, I learned from those encounters that the physical acts of compliance are not enough to satisfy me. Those women didn't care what I did to them, as long as they got paid. That took the edge off, for me. It didn't mean anything. It was just acting. I want – no, I need – a woman who will truly surrender herself to my will. Who'll allow me to use her body however I please – indeed who craves the experience of submission. I want the real thing, not a role.

LS: I gather that there are plenty of women who'd like to play the role of Mrs. MacIntyre. Surely there must be someone among them who shares your interest in – um – less conventional sexual activities.

AM: I seriously doubt it. They're all shallow and inexperienced, mere girls really. Even if one of them harbored secret dreams of submission, she'd never dare reveal that truth to anyone. Society is even harder on women than on men. Anyway, I have to admit that I find most of the women of my own class unutterably boring. All they care for is gossip and fashion. (Sighs.) Nevertheless, I was starting to realize that eventually I'd have to yield to my mother's pressure and marry one of them.

LS: And then you met Olivia Alcott.

AM: And I thank God for that! Olivia's my perfect match – brave, intelligent, mature, and a born submissive. When I first saw her, leading the strike at my factory, I wanted to kidnap her, hold her captive, and use her in every way my obscene imagination could conjure. For one thing, I sensed that she'd love every minute as much as I would.

AM: No, of course not. I'm not a savage, much as I sometimes feel like one. No, she and I concluded a very civil arrangement... mutually satisfying for both parties, I must add.

LS: (Laughs.) I got that impression. Still, you didn't intend to marry her, did you?

AM: Honestly – that never crossed my mind. I was too busy conjuring up nasty things to do to her luscious body.

LS: But fate intervened...
AM: I suppose you could put it that way. I like to think that we would have realized eventually that we were ideal for one another. The scene at the ball simply short circuited that process.

LS: Tell me about that scene. You've made me really curious!

AM: And spoil the experience for the readers? Definitely not. If they want to know how a lowly professor's daughter came to be tied to this billionaire, they'll have to read the book!

If you'd like to read the Tied to the Billionaire, it's now available at all your favorite bookstores:

(and of course on the Total-E-Bound site itself, where you can buy any format you like and have the book sent directly to your eReader.)

Leave a comment on this post, with your email, and you'll be entered into the blog hop drawing. Be sure to visit the other authors, too, so you can meet their billionaires!

I have always wondered why authors portray the rich and powerful men as so controlling and dominating in the bedroom and rich and powerful women as always wanting to be dominated. Is there some scientific evidence that shows this tendency or is this just a perception. Oh well, just thinking out loud. The book sounds very interesting and I cannot wait to read it.

Andrew really knows what he likes and he's not afraid to go for it.

I love that photo! Definitely my kind of billionaire.

Sounds like a great read!!
Thanks for the chance to win!
natasha_donohoo_8 at hotmail dot com

Love the hero's interview. Gives a different and more fun perspective of the book.

Great character interview, some of the responses had me chuckling. Andrew is really confident and charming.

sounds fantastic! Thanks for sharing ;)

Sounds scorching! Can't wait to read it. So nice to meet Andrew!

Thanks for the interview. wow Now I know why I want to read this one.
JWIsley(at)aol(dot)com

I've been dying for this anthology to come out. Yay! Can't wait to read it. Awesome interview too.

Wow, I would love to meet him.
debby236 at gmail dot com

Thanks for sharing the interview...
BeckeyWhiteATgmailDOTcom

Oh now I have to read this! I have to know what happened at the Ball. Such a tease! :D

He looks and sounds delicious! Yummy! I already put the book on my 'must buy' list, but I hope to win... as does everyone else.

Love all your books. Write faster!

On the Above post, I should have left my handle: susanhow

Love this character interview, plus the picture was a nice touch.

Great interview, Lisabet! And it's wonderful to get a visual of Andrew!

I forgot to add my email so I decided to delete the first one and re-answer. LOL! I liked how he called himself "moderately intelligent". That made me laugh. Great interview! (beth at bethdcarter.com)

I enjoyed this interview Lisabet. I love dominant, alpha males and Andrew sounds like he has the "alpha" gene in spades! I am definitely reading this Anthology. Also, great idea that you guys had to introduce us to your heroes.

Sorry it has taken us so long to pick the winners, but we have finally gotten around to it.

Thanks to all of you for participating. Keep an eye on my newsletter or join my Yahoo group lisabets_list for more chances to win!