I'm back from my international ramblings (fabulous trip!) and it's Sunday, so that means it's time for a traditional snog. Today I've got a snippet from my upcoming release (May 9th!) Rajasthani Moon. If you want to be one of the first people to read this opus - and get a hefty discount - you can pre-order the book now just by going to Total-E-Bound.

Before we slide into the snog, I want to thank all of you who visited and commented here while I was away, as part of my Back List Blast event. I hope you enjoyed all the excerpts. I've drawn the winners. Collen is the grand prize winner - she'll get a $25 bookstore gift certificate. Laura and Debby won second prizes - autographed print books from my back list.

Congratulations to all of you!


Neither kink nor curse can stop a woman with a mission. 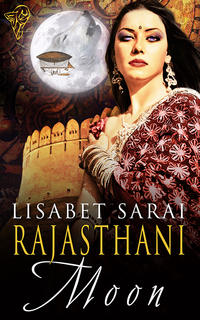 
She awoke at dawn, feeling anxious and irritable. An eerie quiet suffused the palace. After washing and dressing, she tiptoed down the spiralling marble stairs to the ground floor and out to the garden, seeking some sort of balm for her ragged spirit.

Verdant creepers twined along the stone balustrades, studded with pastel blooms just opening to the new morning. Despite the arid climate of the kingdom, dewdrops sparkled like diamonds on the velvety petals. Gentle winds rippled the lake and whispered through the foliage. Snowy gardenias peeked out from bushy clusters of shiny green leaves. Cecily plucked one and inhaled its intoxicating fragrance. She felt her tension ebb a bit as the first rays of sunlight slanted over the palace rooftops down into the leafy space. Closing her eyes, she filled her lungs with the perfumed air and let the sun warm her cheeks and forehead.

Some slight sound drew her attention. There, at the far end of garden, stood Pratan, gazing out over the water. He wore nothing but loose white dhotis and the white turban of a pilgrim. The breeze stirred his ebony hair. Even from where she stood, Cecily could see the rise and fall of his tanned, sculpted chest as he breathed deeply.

Sudden joy swept through her. “Pratan! You’ve returned!” She hastened to his side, snagging his arm as he tried to turn away. “Don’t go. Please.”

He looked weary, haggard, ten years older than the last time she’d seen him. “Best to keep your distance from me, lady. I can feel the beast move inside, every time I catch a whiff of your scent.”

Cecily ignored his admonition. She pulled his body against hers, revelling in the luscious hardness of him pressed against her soft, pillowy flesh. “Tonight we’ll put that beast to rest forever.”

“If the gods will it.” His gruff voice held such despair that she cringed in spite of herself. However, he did not move away from her.

“The gods will smile on you—on us. I’m certain. You are innocent and deserve redemption.”

“Innocent? I’m a murderer twice over. Tonight I may well claim my third victim.”

“Hush. Your brother has sworn he will protect me. And I am more than ready for the worst you can do to me.” She cradled his cheeks, stubble pricking her palms, and pulled his face down to her level. “Kiss me, Pratan. Kiss me and forget your pain.”

She expected him to refuse, to push her away. Instead, he allowed her to press her lips to his and wrap him in her arms. Docile and unresisting, he opened to her questing tongue, but at first he did not respond in kind. She drank him in, pouring all the longing of the past week into her kiss. She was on fire, his touch and scent kindling a passion so fierce she could scarcely breathe. Ravaging his mouth, she sought to ignite an answering fever.

She let her hands wander over his bare back, discovering the raised scars of his harsh life in the mountains. She slid her palms down to his taut buttocks, cupping the firm flesh and pulling his pelvis against hers.

His passivity was a lie. Under his thin cotton garment, he was like stone. Cecily ground her pubis against that lovely hardness and mashed her lips frantically against his. Love me, my poor cursed bandit, she thought. Take me.

As though she’d struck a match, her companion burst into fiery activity. Suddenly he was devouring her, licking, nipping, suckling her tongue then thrusting his own deep into her mouth. His fingers roamed over her curves, slithering under her garments to stroke her bare skin, pinching and probing. Pressing her against a moss-cushioned wall, he slid his thigh between hers, stimulating her aching clit while his erection throbbed against her leg. Meanwhile his teeth and tongue were busy, alternating bites and kisses from below her ear to the hollow of her throat.

Posted by Lisabet Sarai at 5:42 AM

Welcome back and thanks for the peak.
debby236 at gmail dot com

Welcome back from your journey. Hot excerpt and I would not expect anything less. LOL
f150eng@yahoo.com

Welcome back from your trip! (Must post piccy's woman!) And wow...just wow...what a way to wake me up on a Sunday Morning. That's all I'm gonna say!

Wow! Got my motor purring. I'll have to see how this goes.

Welcome back Lisabet! Thank you so much for the win! :)
Your upcoming release has a beautiful cover... really great snippet!

Nice excerpt :) Count me in please!

welcome back,
I hope you had a good time. loved the excerpt, can hardly wait to see what happens with the 3 of them. :) the cover is gorgeous too, i've always loved the way they look in the sarai's, so colorful and pretty.

Thanks so much for dropping by. I'm off to draw a winner now...

I do love the cover, if I may say so. One thing I like about TEB is that if I find photos I like (as I did in this case) they are usually very willing to try and work them into the cover for me.