The Dark Side of Dominance

In 1977, I was managing a used bookstore. That was the year An Excess of Love by Jac Lenders changed my life. This book was my first introduction to female domination and cuckolding. The novel affected me so strongly that I finally knew what I wanted in a relationship.

A year after reading the An Excess of Love, an older woman (Dee) came into the bookstore where I worked. She was thirty-nine, and I was twenty-eight. Dee had on a tight black leather skirt with black pantyhose and high-heels, and an expensive light-blue, long-sleeved blouse. She was also married with five children (her husband was in the military and had just been stationed overseas), and was dominant as hell. In less than a week, we were having a blatant affair that would last for nearly a decade. Her husband was totally against everything she wanted to experiment with in the bedroom. I, on the other hand, was willing to try anything.

I loaned her my copy of An Excess of Love, and that opened up even more areas of interest to her, especially cuckolding. This was a woman who was bored with vanilla sex at home and wanted to try something risky such as having affairs with other men. In time, she would use my apartment for that. Nothing was taboo with Dee. She had no trouble tying me face down on a bed and beating my buttocks hard with a bamboo rod when displeased with my behavior. She also had no problem with having me perform oral sex on her for hours at a time and then leaving me sexually unfulfilled when it was time to return home. I certainly had no problem with her lovers. In fact, when she would tell me about them, it sexually excited me to no end. I kept my apartment cleaned for her and the other men. I made sure my bed always had fresh sheets on it whenever she was bringing someone to my place.

Even when her husband returned home, we continued with the affair. My apartment was a safe haven for Dee as well as for the other men she occasionally saw. She often talked about what it would be like to have me as her submissive husband and doing exactly as she pleased within the marriage. I always thought we would’ve made the perfect couple had things been different.

After ten years, I moved out west, living in Las Vegas for a while, then San Francisco, and finally back to Vegas. It was here in sin city that I first saw the house on Palomino Lane that would become the subject for my novel, The House of Blood. I instinctively knew the house would be perfect for a couple whose lifestyle was based on female domination. Not the loving kind of female domination, but the rough and painful kind that drew blood.

It took another sixteen years before I was finally able to write the book. I wanted to throw everything I could think of into the mix, stir it around, and see what developed. The theme of the story was about two consenting adults who have a marriage based female domination. They buy a haunted house that was once own by the infamous Lady Anne, the Whip Lady of Las Vegas during sixties. Though the novel would start out with the couple having a loving marriage, it would quickly disintegrate into something harsh, brutal, unmerciful, and utterly humiliating for the husband as his wife came under the total influence Lady Anne’s horrible spirit.

I wrote the first edition in 2007 and sold it immediately to Pink Flamingo Publication. The novel, however, didn’t feel finished. I then rewrote it in 2010, eliminating whole chapters and adding fifty pages of new material, upping the ante of what Chris Hill would endure at the hands of his sadistic, dominant wife. I felt the new edition was infinitely better than the previous one. Of course, it was geared more toward a male audience, than a female one. Still, I heard from women who found the novel arousing. 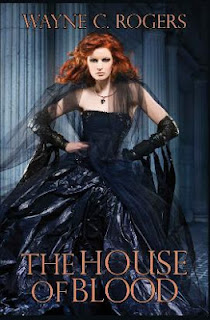 Chris Hill is a successful writer of horror fiction. When he and his wife, Katherine, move into the old, Gothic-styled house on Palomino Lane, their lives quickly change for the worse. For Katherine, the dark history of the house draws her into its vile, evil web. The house and spirit of Lady Anne possess her, feeding off the pain, humiliation, cuckolding, and sexual perversity that Katherine inflicts on her submissive husband. Unable to say no to his wife’s sexual desires, Chris finds himself sinking further into a dark abyss with no escape.