Truce of Trust by Lisabet Sarai

How can a woman choose between her husband and her Master? 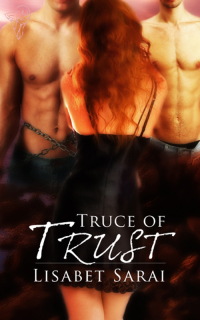 The three of them sat out on the deck, finishing off the second bottle of wine and enjoying the residual warmth of early September. The air still smelled of summer, ripe raspberries and sun-browned grass. In the woods that edged of the yard, night birds called. A crescent moon rose over the tree tops. The strains of Bach’s "Musical Offering" filtered through the screen from inside, mingling with the bird song.

At least Daniel and Greg share the same taste in music, thought Leah dreamily. She leaned back in her chair, finally relaxed. She glanced over at her husband. His eyes were closed. He was lost in the glorious melody. As though he felt her scrutiny, he turned to her, his handsome face luminous with joy.

Greg was watching her, a gentle half smile on his full lips, with no hint of his usual mockery. Leah smiled back, grateful that he was acting like such a gentleman.

I'm incredibly lucky, she thought. Most women search all their lives for one true lover. I have two. Perhaps I should feel guilty, knowing that they have agreed to our ménage in order to please me. But all I feel is gratitude.

Hope and relief washed through her. Maybe this would work after all. They just had to adapt, to get used to living together. To give up some of their individual selfishness for the sake of group harmony. She'd been selfish herself, expecting them to suppress their natural jealousies and insecurities just to please her. She needed to be more understanding. It had to be difficult for them, sharing her. Both men were so dear to her - she needed to work harder to show them.

Leah blushed fiercely, as embarrassed as she was angry. Of course, Daniel knew this about her, but still she didn't want to admit it out loud.

Leah had heard it all before, and suddenly, she couldn't take anymore. She turned her back on them and headed for her room, ignoring their voices calling after her.

"You're mine," he whispered. "You'll always be mine. You just keep him around because you're afraid to give yourself completely to me. Afraid of going too far. You don’t trust your own desires."

"NO!" His arrogance, sometimes so exciting, was nothing but frustrating to her now. "You don't understand. He's a part of me, just as you are."

He reached for her again. "I'd make you forget him, Leah. I'd beat him out of you." His voice was gentle, contrasting with the violence of his words. Underneath his bravado, she could feel his need.

Wow, what a trio...
greenshamrock AT cox DOT net