The Understudy by Lisabet Sarai 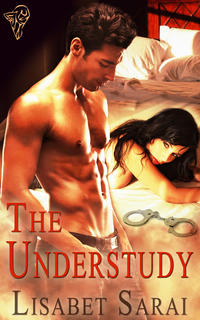 
According to the rumours, though, Geoff's heart is taken. Renowned actress Anne Merrill, his long time partner and submissive lover, has severed their relationship and Hart has escaped to the Berkshires to lick his emotional wounds. With her youth, inexperience, and girl-next-door persona, Sarah knows that she can't compete with the glamorous theatre veteran. She fears that she's just a substitute for the real object of Geoff's affections. As he draws her deeper into his intoxicating games of dominance and submission, Sarah wonders if she's willing to settle for the role of understudy in this perverse passion play.

I wasn't hungry but I forced myself to sit there through dessert and coffee - to act normal. It was Monday, our dark night, when the Playhouse was closed. Adele and some of the other cast members were going over to Rory's, the pub on the other side of the green. If I'd really been serious about giving Geoffrey the brush off, I would have accepted Adele's insistent invitation. Instead, I pleaded a headache. Then Geoff agreed to join them. For a moment, I desperately wanted to change my mind. Don't give in, I told myself. He'll just chat up all the local girls and make you feel miserable. Better to curl up in bed with Margaret Atwood's latest and try to forget him.

I headed for the stairs, exhausted by the emotional cartwheels I'd been doing. He caught up with me in the front hall. I smelled his cologne, felt his bulk behind me. His hands settled on my shoulders and I really thought, for a moment, that I'd faint from the rush of desire that touch triggered.

"Sarah." His voice was a caress.

My frustration and resentment evaporated in the heat of my lust.

"I see that you've made yourself more - accessible. Wait, don't turn around." He let his fingers wander along my throat, tracing my collarbone, then just grazing my taut nipples.

I shuddered with delight.

"Without a bra. Very good." He gave the aching nubs a symmetrical squeeze.

Pleasure sizzled through me.

He moulded my hips, feeling for a panty line. "And panty-less, too! What a sweet, obedient slut!" He began to raise my skirt.

I remembered that we were in a public place, that a cast member, another guest or a member of the hotel staff might wander into the hall at any moment. "No..." I moaned as he brushed his palm across my exposed bush.

I felt a fingertip parting my curls, stroking my slippery outer lips. His gentle tap on my clit sent lightning up my spine. I went rigid, holding my breath, silently begging for more. The finger disappeared. His big hands smoothed my skirt over my buttocks.

"Meaning what? Are you mine or not?"

"I - I don't know." I was desperate for his touch, but fear held me back. Not the fear of being discovered. The fear of what I might discover about myself.

He twirled me round to face him. "An honest answer. I appreciate that. Just as I appreciate the fact that you've followed my instructions. Really, I do."

I searched his eyes. He appeared to be sincere.

"Then why - why did you ignore me all through dinner?"

His laugh was edged with mockery. "Did you want my attention, little one?"

He cupped my chin. "I thought you might be more comfortable if I wasn't undressing you with my eyes. Believe me, I saw you, Sarah. I saw your gesture of submission, and rejoiced."

He bent to me and pressed those arrogant, sensual lips to mine. This kiss was different from the ones in his room. It was deep and quiet, like a pure forest pool. Our mouths locked. Our breath mingled. I seemed to feel his thoughts, probing, questioning, inviting me to fall further under his spell.

I forgot where I was. I was loose, wet, ready to let him take me then and there. When he finally broke the kiss, I felt almost physical pain.

"They're waiting for me now, your friends. They're dying for my company, too." He gave an evil chuckle that reminded me, once again, that he was a rock god and I was just his groupie. "I've got to go now."

Then his voice became velvet and I melted once more. "Tonight, Sarah. Eleven p.m. I'll expect you in my room. If you're ready for more - come to me then."

Before I could reach out to grab him and hold him back, he was gone.

Get your copy of The Understudy today - also available in audio!
Posted by Lisabet Sarai at 3:00 AM

Email ThisBlogThis!Share to TwitterShare to FacebookShare to Pinterest
Labels: Back List Blast, Bondage, dominance and submission, The Understudy

Ooh that's a hot excerpt. I look forward to reading the book .

Love the excerpt!!! Cant wait to read this book!!!
lauratroxelatyahoodotcom

Great excerpt. Audio would certainly be interesting to listen to in the car. NO kids allowed.
debby236 at gmail dot com

Will she? Won't she?

Wow, he kind of comes off as a bit of a jerk in the excerpt. Though that makes him even more intriguing...