Shy and serious by day - insatiable by night.

During the day, she works diligently on her doctoral thesis. At night, though, she finds herself drawn into increasingly extreme sexual encounters with strangers. Her anonymous secret life begins to take over when she discovers that the masked seducer she meets in a sex club and the charismatic young professor courting her are the same man.

Marla still grasped her hand. “Come play with us,” she said sweetly, pulling Miranda toward one of the walls lined with couches. 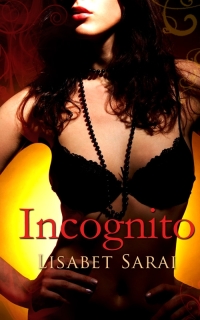 Then all her awkwardness and uncertainty dropped away. With her right hand, she reached for Marla, her fingers seeking the hard little nubs pushing through the spandex. With her left, she drew Marcus to her, reveling in the sensation of his tumescence pressed against her thigh. Marla’s breast cupped in one hand, Marcus’ scrotum in the other, Miranda kissed them in turn.

Marla broke away first. Without speaking, she pulled the jumpsuit off her shoulders and wriggled out of it, somehow managing to look charming rather than clumsy.
Marla still grasped her hand. “Come play with us,” she said sweetly, pulling Miranda toward one of the walls lined with couches.

Marla was slender, but far from boyish. Miranda could not take her eyes from the dusky rose nipples that pertly tipped the girl’s palm-sized breasts. Her skin was golden all over with a light tan; there were no pale patches. Marla’s hips swelled invitingly from a narrow waist, then down to firm, straight thighs. At their meeting point, her neatly trimmed triangle of brunette curls left Miranda feeling weak and confused.

I’ve never been attracted to women before, thought Miranda. What’s happening to me? Then an image from her past flooded her inner vision. High school, Rebecca – the minister’s wild daughter, long blonde locks flying, laughing as she danced at a party, while a younger Miranda watched from a corner, overwhelmed by a craving she could not name. So, thought Miranda, beginning to understand how little she knew her real self.

Marla raised her arms behind her head, stretching luxuriously as she lifted her thick locks away from her neck. Miranda helplessly admired Marla’s elevated and accentuated breasts, the faint, symmetrical trace of her ribs, the slight indentations of taut muscle on either side of her dimpled navel. Then Marla took hold of her own nipples, twirling them between her finger and thumb, so that they lengthened and hardened. Her eyes behind the domino were locked on Miranda’s. “Do you like what you see, darling?” she asked. “Can you see how much I want you?”

She relinquished one of her nipples and brought her palm down to brush ever so lightly over her bush. Electric shivers tingled in Miranda’s sex as she watched and imagined the other woman’s sensations. Now Marla pressed the heel of her hand against her pubis and slid her middle finger in among the curls. Miranda could clearly see its quick, oscillating movements as it teased the woman’s hidden clit. Marla’s eyes were half-closed, her ripe mouth half-open as her breathing grew more ragged.

Miranda moaned in sympathetic arousal. Then suddenly there was a hand squeezing her tit through the velvet, and another making lazy swirls across her sex, while hot lips nibbled at the sensitive spot where her neck met her shoulder. “Marcus!” she gasped, writhing against the hard body behind her.

“At your service.” His voice was almost a whisper, close to her ear, but Miranda still caught the tone of amusement. She reached behind her, felt his warm, dry, naked skin. While she had been focused on Marla’s performance, Marcus had apparently removed his jumpsuit.

“Do you like my little sister?” He drummed his fingers against her velvet-sheathed pubis in a maddening, thrilling tattoo.

In fact his attentions distracted Miranda from his supposed sibling. He rubbed three fingers firmly back and forth across her mound, intruding ever so slightly into the space between her thighs. Without thought Miranda spread her legs, allowing, inviting greater access.

Get your own copy of Incognito!

Sounds really hot. Thanks for giving us such an amazing excerpt.
debby236 at gmail dot com

Wow, that's an interesting premise. And the excerpt made it even better.