Keeping It Short and Sweet

My short story Starting Over was my first submission to Total-e-Bound and I was thrilled when they accepted it for their Lust Bites series. I don’t write short stories very often. I might start off with the plan for the story to be short but because I just sit at the laptop and write without any idea where the plot is going, more often than not, short becomes long and before I know it, very long or in some cases extremely long. I then spend weeks wrestling it back to acceptably long.

Short stories are mere snippets in the life of the characters and when a reader has a little moan that it was too short, I actually take that as a compliment – thinking they’d like to hear more. Of course, what they probably mean is – you have no idea how to write a short story, you twit – this should be a novel!

I hope I succeeded with Starting Over. Tell me if I did. Er….. be gentle if I didn’t.

When Pia goes into a hotel bedroom looking for a night of stringless sex, she gets more than she bargained for. 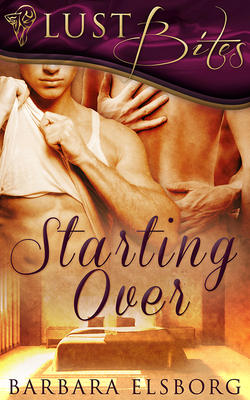 Pia’s life needs a kick start. She’s tired of going home to an empty flat, killing plants and fed up with her job. She hasn’t been held in a guy’s arms for far too long. If men can do sex just for fun, why can’t she? But as she makes the trek to a hotel bedroom she’s fraught with indecision. It’s a minor miracle that she manages to pluck up the guts to open the door and slink into the room. That miracle becomes so much more than minor once she crawls into bed and gets the shock of her life.

Connor and Espen want a third person in their lives but don’t seem to be having much luck finding the right lover until Pia comes along, but when she’s gone in the morning, they don’t know what they’ve done wrong and if they don’t know that, how can they put it right?

Buy from Amazon US


“Hi, I think you have a message for me. Pia Andrews.”

The guy looked her up and down in a not very pleasant way and something inside her began to shrivel. He handed over an envelope with her name and Room two-ten scrawled in untidy writing. She felt the hard rectangle of a card key inside.

Pia walked away from the elevators towards the bar. Did that guy on reception think she was a prostitute? Oh, God. Apart from not being paid, what was the difference? Idiot. There was a big difference, but this was still a mistake. Her stomach churned and she felt sick. She pulled her phone from her pocket and scrolled to Steve’s number.

“Hey there, sexy. You are going to make it tonight,” he said rather than asked.

“You can have a drink in my room. I’ll order room service if you’re hungry.”

She stuffed the phone into her pocket and walked to the elevators.

It’s just sex. Where’s the problem in that? I love sex. I love being held, being touched, the way my toes curl when I come. I miss it. I’m fed up of doing everything myself. No one’s going to know.

She wasn’t going to fall in love with this guy, which was the whole point. She’d had love and she didn’t want it again because she couldn’t cope with the pain of losing it for the second time. Still, the doubts were there. Sex with no emotional attachment?

How would she feel tomorrow? Happy? Guilty? Dirty?

Barbara Elsborg lives in West Yorkshire in the north of England. She always wanted to be a spy, but having confessed that to everyone without them even resorting to torture, she decided it was not for her.

Vulcanology scorched her feet. A morbid fear of sharks put paid to marine biology. So instead, she spent several years successfully selling cyanide. After dragging up two rotten, ungrateful children and frustrating her sexy, devoted, wonderful husband (who can now stop twisting her arm) she finally has time to conduct an affair with an electrifying plugged-in male, her laptop.

Her books feature quirky heroines and bad boys, and she hopes they are much fun to read as they were to write.

I agree, short stories are perfect when you just a bit of time.\debby236 at gmail dot com

Sometimes my mood or time frame want a short story... Thanks for sharing!
greenshamrock AT cox DOT net

Thanks for commenting, guys. I must admit, I'd started to write another short but it's turning out to be longer than I thought!

Ah the mysteries of books. I never plot so it's always a surprise how they turn out - but it's only ever happy ever after.