Fire in the Blood by Lisabet Sarai

In the heart of darkness, eternal passion burns.

Maddy and Troy hope that a carefree vacation in tropical Jamaica will re-ignite the passion in their five year relationship. On a scenic mountain trail ride, Maddy's horse bolts and carries her deep into the jungle. Injured and lost, she is saved by a seductive giant of a man whose mere presence kindles unbearable lust. By the time she understands his dark nature, it is far too late for her to escape.

Bitter and alone, Etienne de Rémorcy haunts the forest around the ruined plantation of Fin d'Espoir. He has sworn to never again taste taste human blood, but when slender, raven-haired Madeleine begs him to take her, he cannot resist.

Troy is hugely relieved when Maddy makes her way back to their hotel after her ordeal in the mountains. But he finds her greatly changed - fiercely passionate in bed, restless and disturbed at other times. The tall, elegant stranger he meets on the beach holds the key to her transformation - and soon has seduced Troy as well. Even Etienne's most potent magic can't extinguish the fire in Troy's and Madeleine's blood.

His entry was swift and silent. She didn't even know he was behind her until she noticed his fire-cast shadow on the bed. "You may wear this." He handed her a brilliant garment of multi-coloured silk. "It belonged to my mistress." The dressing gown was soft as a cloud, so delicate that Maddy feared it would tear at her slightest touching. 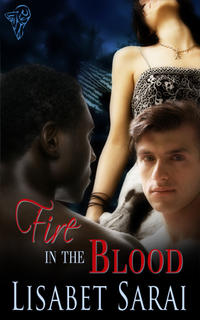 "God, it's exquisite." The jewel-toned robe shimmered with a twining pattern of blossoms and peacocks.

"But I can't wear this. I'll destroy it. It looks like an antique."

"Put it on." Power rang in his voice. There was no way that she could disobey. She slipped the gown over her shoulders and belted it around her waist. The silk caressed her breasts and belly like secret hands. Her pussy dampened again. "Sit down now, and I will bind your ankle."

She seated herself on the bed. The giant perched on a wooden stool and drew her foot into his lap. Maddy struggled to hold still. Every time he brushed his fingers over her flesh, electric thrills sizzled up to strike between her legs. She wanted him to push to slithery silk up her thighs, to spread them so wide that it hurt, then dive down to feast on her juicy sex. Surely he must smell her. He must hear her heart, so loud in own ears that she could no longer hear the crackling fire. However, he appeared to be completely occupied with his nursing duties. He wrapped her foot and ankle in layer after layer of taut muslin, a reasonable substitute for an ace bandage, then secured his efforts with several safety pins.

She couldn't stand it any more. She laid her palm on the kinky nap covering his head. He raised his eyes. In their depths she saw wisdom and pain. "I'm Madeleine," she said. "What's your name?"

"Etienne." He settled back on the stool. "Etienne de Rémorcy."

"I want to thank you, Etienne. For all your help." Casually, with one hand, she loosened the sash holding the robe closed. She leaned forward, so that the silk gapped open and revealed her gleaming white breasts.

"I could hardly do otherwise. My mistress taught me how to be a gentleman. You obviously needed my assistance." His rich voice sounded strained.

"Oh, I did." Maddy shifted on the bed. The dressing gown slipped off one shoulder. "I still do." The peacocks slithered away, exposing her pale thigh and her wound, crusted with dried blood.

Etienne's eyes glittered. His blunt hands shot out and grabbed her wrists. "Do not play with me, girl." Lust gushed through Maddy's body. Etienne's nostrils twitched. He tightened his grip until she cried out. "Do not tempt me."

"You're hurting me," she whimpered. "Please..." Dimly she understood that she was not begging to be released.

"Believe me, I will hurt you far more if we continue." Etienne forced her down on the bed, her captured arms above her, and straddled her with his massive thighs. "Although I was taught to be a gentleman, in truth I am a savage beast." The fragile silk tore away from her nakedness.

"Don't you want me?" Maddy's eyes swam with tears.

He brought his mouth close to her ear. "You could not possibly understand how much." His breath was the icy exhalation of a glacier.

She shivered under his weight. His coolness only stoked the fire in her pussy. "Then take me."

He freed her wrists and sat back on his heels, searching her face. She cupped her ripe breasts and offered them to him. Please, she prayed silently, let him see my need. She opened herself to him, letting those luminous eyes probe her deepest desires.

He licked his full lips, and his white teeth gleamed in the fire light. He reached for his belt. "Let it be as you will, then," he growled. "I am no longer responsible."

Read Fire in the Blood today!
Posted by Lisabet Sarai at 3:00 AM

I have not red too many menage stories. This one does look hot.

Sounds familiar.. have to see if I have this one... thanks for sharing Lisabet!